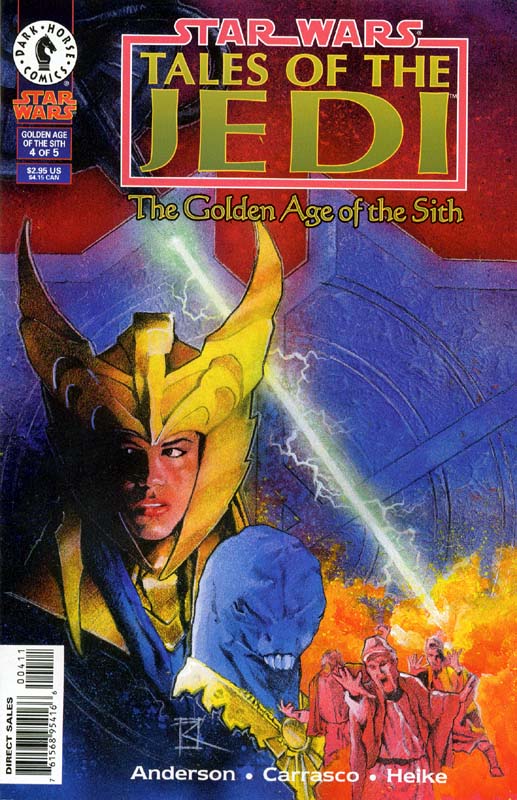 The Golden Age of the Sith 4: Pawns of a Sith Lord

What is it ? : On Ziost Naga Sadow is being made into Dark Lord of the Sith, and two insectoid creatures burn a symbol into his forehead, while elsewhere in the galaxy Empress Teta and her two Jedi arrive at the senate on Coruscant and attempt to convince them of Odan-Urr's vision that the Sith are rising.
However the senate isn't convinced, but Teta promises that at least her empire will be ready for the attack and they return home.
Gav Daragon is in a cell deep in Naga Sadow's citadel on Khar Shian bemoaning that Naga Sadow has told him that he is not a prisoner, but he cannot see his sister. Bored he begins practicing the Sith powers that Sadow has been teaching him, and he manifests an illusion of his sister, but Sadow enters and compliments his powers and abilities.
Sadow then sends his forces away to capture the Daragons starship from where it is being held by Ludo Kressh's forces, and they capture the Starbreaker 12, leaving a clue that it was Sadow behind the attack which Kressh finds afterwards. Ludo Kressh calls his allies, and reveals that Sadow has been behind the attacks, and they gather their forces to attack Sadows citadel.
Jori Daragon is also being held in a cell, but is instead on Khar Delba, and meets with Sadow who gives her a message from her brother, revealing that they are being kept at seperate citadels, because Sadow's enemies only know on the existence of this one and therefore could only strike and kill one of the siblings.
Sadow shows her the captured Starbreaker 12, and she begins inspecting it to ensure that it has not been interfered with and that the navigation coordinates to return to the Republic haven't been deleted.
High above the planet, Kressh's fleet arrives and begins bombarding the citadel, exactly as Sadow has planned.

High Points : Sadow's plans continue to unfold, and the issue plays out almost exactly as the new Dark Lord of the Sith has planned, and it's a delight to behold. It's difficult to see why he has purposely provoked an attack on his false citadel, unless it's just to lure his enemies into an ambush to wipe them out. And if indeed this is his plan, allowing all those not loyal to him to group together revealing their true colours so he can wipe them out, then it's a piece of brilliance.

He also manipulates the Daragon's wonderfully, with Gav never having had the patience to practice the force before, Sadow ensures that he is bored into trying anything.

Low Points : The fact that Sadow purposely leaves evidence that it is him that attacked Kressh and took the Starbreaker 12 is revealing by a single line of dialogue in a single panel so is easy to miss, with it otherwise looking as if Sadow's plans have been discovered by accident, and he is just claiming credit for this being all to plan.

I also feel that Jori is perhaps a little too naive, as Sadow outright tells her that he is keeping her and her brother in seperate places so that only one of them can be found and killed. While she might be glad of a 50% chance that she'll be safe, it does seem pretty coldblooded to expect that you or a loved one will be killed.

Given that Jedi often have visions, it does seem odd that the Senate and the Jedi there ignore Odan-Urr's vision. I would have thought that the Jedi would have believed in one of their number's link to the force, and would have tried to convince their respective worlds to prepare. But apparently no.

So what do you really think ? : Another solid issue, and the worldbuilding is mainly behind us, although I did adore the fact that the Jedi are referred to in the Senate as "Jedi Watchmen", which gives them a particular role at this period of Star Wars history, and one that suits better than their one as Generals in the Clone Wars.