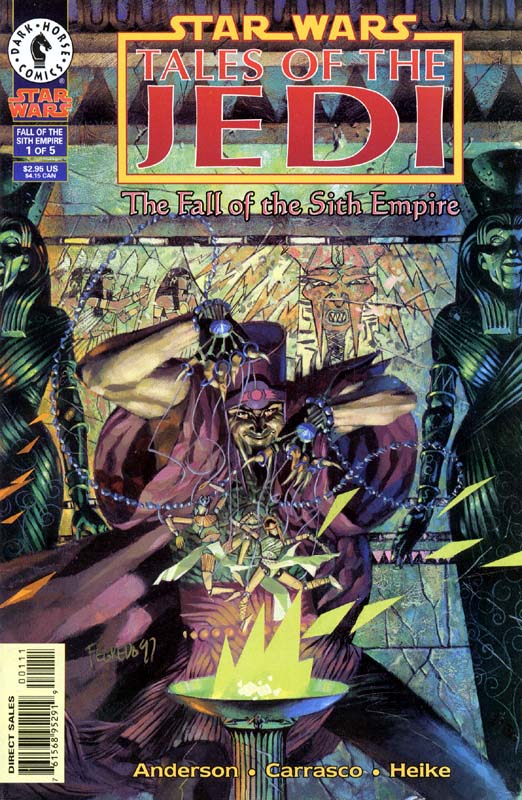 The Fall of the Sith Empire 1: Desperate Measures

What is it ? : Jori Daragon is aboard the Starbreaker 12 heading back to Cinnagar after escaping from the Sith Empire in Golden Age of the Sith. She emerges above the planet and almost collides with a massive starship, and when she identifies herself to flight control and requests landing, she is recognised as having blasted her way out of the docks and stolen her ship, so fighters are launched to escort her down to the ground.
Landing and emerging from her vessel with warnings of the Sith, her wild story is ignored and she is placed under arrest, with even Aarrba the Hutt rejecting her claims as fantasy and telling her how disappointed he is when he gave her and her brother Gav so many chances.
The trader Ssk Kahorr claims her ship as compensation for the vessel he lost using the hyperspace coordinates that the Daragons plotted.
Meanwhile Jedi Knight Odan-Urr is studying in his quarters when his master Ooroo arrives, unsurprised that Odan-Urr is cloistered away with his books. Ooroo has heard of Odan-Urr's vision of the Sith from the other Jedi who were present at the Republic Senate, and he is worried about the Sith Empire. But Empress Teta takes him and shows her forces and massive capital ships which are being readied for the defence of the Republic.
Jori is taken to the dungeons of Cinnagar and thrown into a cell, and although the courts are busy with war trials from the Empress's conquest of the system, they expect Jori's case to be dealt with immediately as it is so clear cut.
Across the galaxy, Naga Sadow is gathering the Sith Lords ready for his attack on the Republic, and Gav Daragon is torn about attacking his former home, but Sadow points out the flaws in the Republic, where people like Gav and Jori are mistreated without opportunities, where the Sith recognise skill and offer opportunities to those who are capable. Gav isn't sure, but events are disrupted when Ludo Kressh's battlecruiser arrives over Sadow's Citadel, and Kressh tries to convince the gathered Sith Lords of Sadow's scheming and plotting.
Sadow orders Gav to press a button to shut Kressh up, which activates the defence systems blowing Kressh's cruiser out of the sky, and Gav is shocked as he realises that he has killed for the first time.
Sadow reveals he placed a tracer aboard the Starbreaker 12, and Gav realises that her escape was all part of Sadow's plan. . . .

High Points : The repercussions of Gav and Jori's actions at the beginning of Golden Age of the Sith come back to haunt Jori, as she is arrested for those crimes. And it makes a whole load of sense, as I really can't see why she wouldn't expect it, and displays how many chances the Republic and especially Aarrba had gives the Daragon's.
And this shows the real difference between the Republic and the Sith, so while Gav is easily manipulated into believing that the Republic is to blame for keeping him and his sister down. It's fairly clear that they were given opportunities and their circumstances although unfortunate were clearly of their own making.

But the story continues to show Naga Sadow as an expert manipulator, easily convincing Gav of the need for an assault and conquest of the Republic, even though it will obviously cause massive loss of life.
Although his callousness does cause the mask to slip slightly at the end, allowing Gav to see Sadow's schemes, which does seem a little out of character for how Sadow has been portrayed up until now.

Low Points : My only real problem with this issue is the one I had with a couple of the early issues of Golden Age of the Sith, in that there's a whole load of exposition without much action. We get a lot of recounting of Odan-Urr's vision and that Teta is building her forces, we get Kressh returning to make a plea to the Sith Lords again, and being defeated again.
In fact the only real forward motion we get is Jori arriving back at Cinnagar with warning of the Sith and being arrested and not believed because of her crimes. And even that little forward motion is repeated, as she makes pleas to Aarrba, and then pleas for her ship to not be claimed by Ssk Kahorr, and then pleas to the guards to believe her, etc, etc.

The other problem I have, although this time it seems more relevant to the plot so I'm a little more forgiving, is that the two protagonists of the story, Gav and Jori are both almost completely passive in this issue, with events happening to them and around them, rather than because of them. And while Jori's powerlessness is part of the plot as she tries to warn the Republic, but is ignored. Gav basically does nothing while events occur around him, pretty much only showing his face so we don't forget he exists.

So what do you really think ? : Although this is the continuation of Golden Age of the Sith, it is a new series so I can forgive some recapping of the story and reinforcement of the important events occuring. Although I seriously hope that we don't get more of it in future issues and we can just get on with the story.

Final Words : A solid issue, and although not much happens it does look as if that things will move forward in the next issue and we'll get some real events of import.