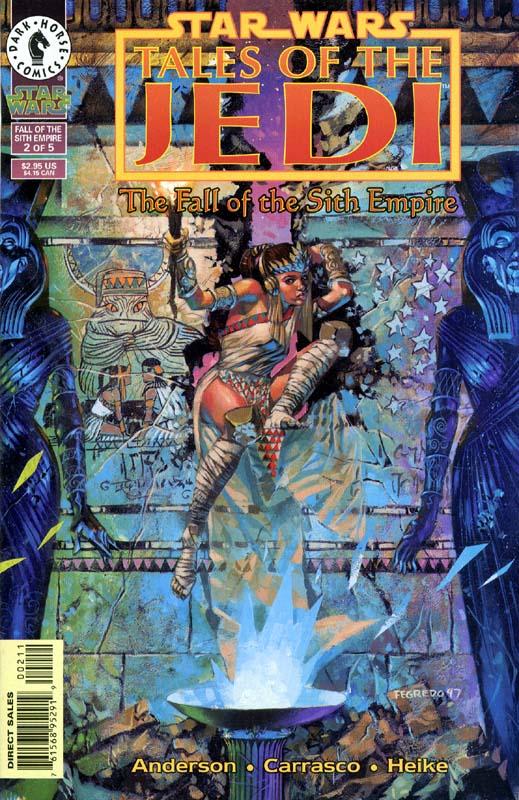 The Fall of the Sith Empire 2: Forces in Collision

What is it ? : Jori Daragon is taken before the court for her crimes, and tells her story of the Sith Empire, but once again isn't believed and sentenced to be sent to the colony world of Ronika to help build a world. Ssk Kahorr enters the court and the ownership of the Starbreaker 12 is officially transferred to him as compensation for his lost cargo vessel.
Jori is taken straight away to a transport ship and given a survival pack for her time on the colony world, which consists of allergy pastes, anti-venom ampules, emergency scab bandages, and ultraviolet eye shields.
Across the galaxy Naga Sadow is gathering his forces from across the Sith Empire at the world of Ch'hodos, and speaks to Gav Daragon about the Empires needs for fresh blood, a term that Gav balks at, but he continues to cooperate as he wants to help his sister.
On Ronika, Jori is working away and spots an ore transporter arriving, so pretends that she's been bitten and manages to board and steal the shuttle. The fighters around Ronika shoot at the Ore Carrier as she pilots it away, but it is too rugged and takes no damage, although when she returns to Cinnagar the defences there destroy the ship and she leaps free in a glider as the vessel breaks apart in the atmosphere.
She sneaks into the Empresses Palace and finds Teta, warning her of the Sith, although first thinking it is an attack, the similarity of Jori's story compared to the warnings of Odan-Urr makes the Empress believe Jori and begins rallying her forces in defence of her Empire and the Republic.
Across the galaxy Naga Sadow puts Gav in charge of the attack on Cinnagar under the guidance of Massassi warriors, and himself boards his Meditation Sphere to lead his forces through Hyperspace on the assault on the Republic. . .

High Points : Finally at least one of the protagonists of the story seizes control of events and becomes the one driving the story forward, and while Gav is still mainly passive, Jori is the one breaking out of her imprisonment, stealing a ship and returning to Cinnagar with warnings about the Sith.


Low Points : Although the story is trying to have Gav realise that Naga Sadow is evil and doesn't have his best interests at heart, the fact he balks at the phrase "New Blood", makes him just appear overly sensitive.
New Blood is usually considered a good term, and is so common that I can't believe he hasn't heard it before, so just comes across as looking for faults with what Naga is saying rather than discovering Sadow's nefarious schemes. It would definitely have been better if he was noticing Naga giving speeches to his forces about "crushing" the Republic which were to give him pause.

I also was slightly thrown off by Jori's escape, as on one page the Ore Carrier is tough enough to shrug off fighter attacks, but the very next page it is being blown apart by fighters which appear to be exactly the same design. If they could even have had Cinnagar as the capital of Teta's empire have different ships then I could have understood that they were likely to be more advanced and powerful, but they appear to be the exact same ships.

So what do you really think ? : The story is moving along nicely, and although Naga Sadow is just repeating here what he did last issue, slowly building his forces for the attack, this issue is Jori's. Allowing her to seize control of her situation and bring warning to the Republic as she is finally believed.

Final Words : So, we finally get to see the assault on the Republic next issue? With only three issues to go, we need to see the attack and defeat of the Sith if the story is to live up to its title as the "Fall" of the Sith Empire.