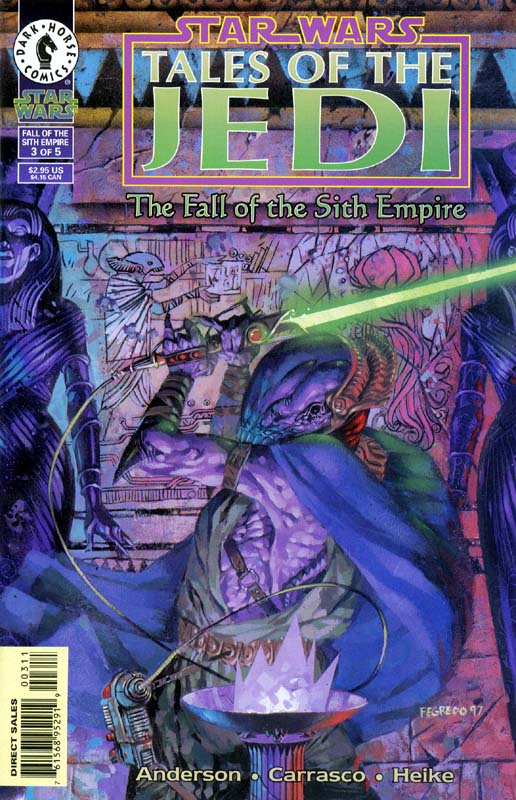 The Fall of the Sith Empire 3: First Encounter

What is it ? : Ssk Kahorr is aboard the Starbreaker 12, taking his newly acquired ship for a test flight when it detects a massive fleet emerging from Hyperspace. Aboard the fleet Naga Sadow orders them to fire on and destroy the vessel, pointing out to a distressed Gav Daragon that there were no humans aboard so his sister has not been hurt.
Meanwhile at Coruscant, Memit Nadill is arriving with warning of the Sith for the Jedi, who tell him that no Warrior of the Force fights alone, but before they can organise the Sith Fleet emerges overhead.
The Jedi rally on the steps of the Senate, as tens of thousands of ships launch drop pods filled with Massassi troops and Sith war beasts.
At Cinnagar the Empress Teta reviews the incoming information, and how the Sith are attacking everywhere at once and her forces will be overwhelmed, when the head of the KIrrek rebels asks for freedom for his men if they fight to defend the Empresses planets, which she agrees to. Odan-Urr gives Jori Daragon a lightsaber to help defend herself, and she leaves to get a vessel to join the battle above, heading to Aarrba's repair yard to get one.
Overhead, Gav is shocked at the damage being done to his hometown, and takes a shuttle down to the surface telling the Massassi that accompany him that he will lead the forces from the ground, but he really plans to locate his sister. Arriving at Aarrba's repair yard, he is confronted by the Hutt, who blames him for the attack, and before Gav can react the Massassi fall upon the helpless Aarrba and kill him, leaving his blood covered body lying on the ground.
Jori enters the repair yard, seeing Gav standing over Aarrba and accuses him of the murder, igniting her lightsaber she attacks.
At the planet of Kirrek, Odan-Urr and Master Ooroo stand with the forces that Odan-Urr once defeated for the Empress, manning the walls of a fortress as Sith Drop Pods rain from the sky depositing thousands of Massassi and War beasts. . .

High Points : And the invasion has begun, and an overwhelming one at that. Tens of thousands of ships above Coruscant, and the Sith fleet so large in the Empress Teta system, that it is attacking everywhere at once. The Republic can scarcely believe that so many ships could be mustered together by the Sith.
And what a well organised invasion it is too, the Sith have drop dods to deposit their troops to the surface, while their capital ships remain overhead. Everything about this invasion actually makes sense, there's no puzzling on how the troops got to the ground, there's no confusion over how everything is happening so quickly, it's impressive in its scale, while remaining understandable and plausible.

Low Points : With the invasion taking part over so many fronts, the story does feel a little distracted as it zips from scene to scene. We move from Memit Nadill at Coruscant to the Empress Teta, to Jori and Gav, to Odan-Urr, and among all of this what seems to be the main plot, that of Jori and Gav feels a little inconsequential and lost. The death of Aarrba is rushed through, and Jori just attacks her brother without listening to his denials of the murder, making it appear as if she assumes that he will have turned evil during his time with the Sith.

And although I know the storyline and the reason for it, the fact that during this issue, the main antagonist, Naga Sadow isn't seen at all without any explanation weakens the storyline.

So what do you really think ? : Another solid issue, and we're well into the Sith Invasion, and it would be nice to see a little more of it, even though I know we're going to be rushed through it all too soon.

Final Words : Well, two more issues of "Fall of the Sith Empire" to go, and the Sith actually look stronger than ever, so their fall is going to be a quick one.