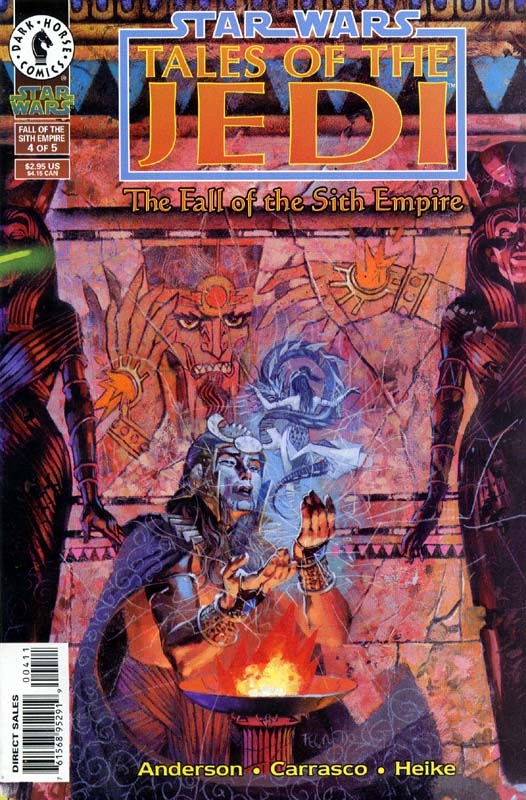 The Fall of the Sith Empire 4: The Dogs of War

What is it ? : Jori and Gav Daragon are in Aarrba's Repair Yard on Cinnagar where Jori has discovered Gav standing over the bloody murdered body of the Hutt and is blaming him for the attack. Gav flees with Jori pursuing, and as he boards his Sith shuttle, she takes a vessel and follows him into orbit. His shuttle lands on the Sith Capital ship he was commanding and it jumps to Hyperspace, but Jori recognises the coordinates where it has gone.
Gav's ship arrives over the star Primus Goluud, where Naga Sadow's Meditation Sphere is located, with the Sith Lord using Battle Meditation to creating illusions to bolster the Sith forces attacking the Republic. And Gav orders his ship to open fire, damaging the Sphere and breaking Sadow's concentration, ending the illusion.
On Coruscant, Memit Nadill is leading the Jedi in what appears to be a doomed defence of the Republic Senate, when the illusions fade and the overwhelming Sith Forces are revealed to be far less than they imagined. So the Jedi rally their forces and turn the battle to routing the Sith from the planet.
On Kirrek, the Rebels are fighting to defend their world from the Sith alongside the Empress Teta's forces and the Jedi, Ooroo and Odan-Urr. Odan-Urr attempts Battle Meditation, but he cannot get it to work against the single minded Massassi, and their lines are overwhelmed, which forces Master Ooroo to crack open his gas tank, releasing poisonous Cyanogen Gas to kill the Massassi, but he cannot breath and passes away telling Odan-Urr of a vision he has of Odan-Urr living to be one of the eldest Jedi and dying among his books. The tide of battle is turned when the Prisoners from Ronika are released and arrive to bolster the forces on Kirrek even further.
Above Primus Goluud, Sadow's Meditation Sphere is unarmed, and he is at the mercy of Gav's battlecruiser, but he pleads with Gav to allow them to meet face to face, so they can discuss it, or at least end it like men. So Gav takes a shuttle across the the Meditation Sphere, where he searches for Sadow, promising that the Dark Lord's words won't sway him.
However, Sadow just steals Gav's shuttle and leaves him aboard the crippled Sphere, boarding the cruiser and leaving. Gav uses the Sphere's communications systems to call for his sister and the Republic for help.
They arrive, but it is a trap set by Sadow, as his fleet also arrives, but fires at the star, causing enormous eruptions to destroy the Republic fleet, however Gav warns them and they all flee, but without time to rescue him from the Sphere, and as the fleet departs, Jori watches as the star's expansion destroys the sphere, killing her brother. . . .

High Points : Sadow's plans continue to be strong, as we discover he is using illusions to lead the Republic forces that they are overwhelmed. I'm not sure exactly how this works, as surely the illusions can't actually kill anyone? So while the Sith forces would look overwhelming, they'd also appear to be generally incompetent as they wouldn't be killing many of the Republic forces.

I also adore his switch with Gav, luring him aboard the Meditation Sphere, supposedly to face each other as men, but really just so he can steal Daragon's shuttle and leave. It's a simple idea, but works so well with Sadow's personality of manipulating people for his own ends. Even this turns out to be trap, as he's placed the Sphere over an unstable star, which can be used as a weapon to destroy any attacking fleet. He continues to appear to be a skillful manipulator and planner, even if we are beginning to see his downfall here.

Low Points : I'm not happy with how some of the events seem to work in this issue, for example, Gav distracts Sadow causing the illusions he has been creating to fade away and turning the Battle of Coruscant. However, we don't see the same thing happen at other battles, so the Battle of Kirrek the Sith still appear to have overwhelming odds. So were the illusions over Coruscant the only ones? So if Sadow had just decided to attack the Empress Teta system first of all, could he have swarmed it before moving on and overwhelming the rest of the Republic? So Sadows tactics were actually flawed? Or were the same illusions used everywhere, and the comic just didn't show it?

And Master Ooroo's gas tank. I find it hard to believe that a tank of gas not much larger than a man could have such a massive effect on the battlefield, surely the gas would just disperse in the open fairly quickly, only killing maybe a dozen or so Massassi? Which makes his sacrifice somewhat futile.

And finally, the last issue made it look as if Jori was attacking her brother with the lightsaber she'd been given by Odan-Urr. But this issue picks up with Gav just fleeing while Jori is crouched over the body of Aarrba. Also he had a number of Massassi with him, who seem to have disappeared between issues.

So what do you really think ? : Despite a few flaws which make it seem a little rushed, the story carries well and we actually get Gav acting as the protagonist and moving the story forwards, even if it does lead to his death fairly quickly.

Final Words : Well, the final issue of Fall of the Sith Empire to go, and Sadow looks to be on the run, his forces over Kirrek and Coruscant are defeated and fleeing, although I have difficulty being happy about this, as Sadow has continued to be the most interesting character in the story, and I've kind of wanted him to succeed, even if he is an evil Sith Lord and brutal dictator.