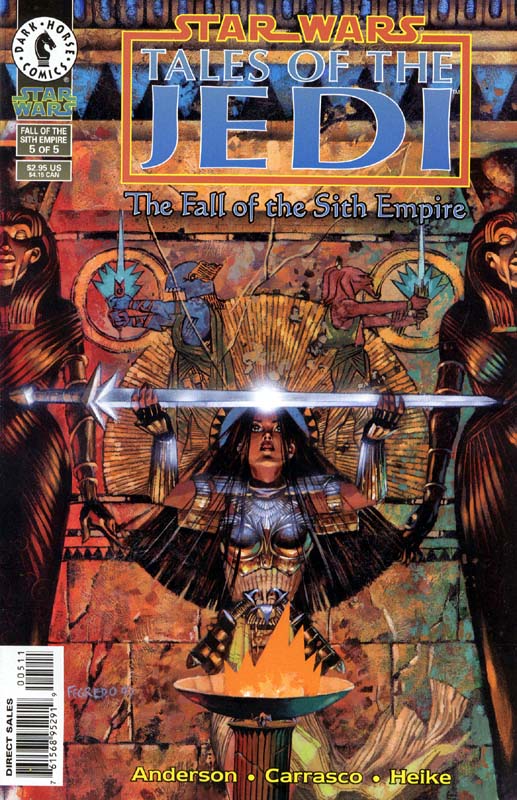 The Fall of the Sith Empire 5: End of an Empire

What is it ? : Naga Sadow's fleet is in retreat, he returns to the Sith Empire to rebuild his forces for a fresh assault on the Republic, however his ships are ambushed as they return. Ludo Kressh has survived by sending a drone ship which Sadow destroyed, and then building up support during the Dark Lords absence and being christened the new Dark Lord.
The fleets clash, and Sadow orders one of his crippled vessels to suicide against Kressh's vessel, killing the new Dark Lord and causing his remaining fleet to flee. But after all of the disasters he has faced, he cannot bring himself to feel joy at the defeat of his enemy.
At Kirrek, Odan-Orr watches as the remaining Sith flee back to their ships, and as the now free men of Kirrek celebrate their victory, their freedom and plan to rebuild.
Following Gav Daragon's hyperspace coordinates the Empress Teta leads her forces on the attack into the Sith Empire and they surprise Sadow's remaining vessels. Sadow's fleet is unprepared for battle, already damaged and having expended it's ammunition it is vastly outmatched by this new opponent.
On Coruscant the senate doors open and those hiding inside begin to celebrate, but Memit Nadill disconnects the power cell from his lightsaber, hoping that he will never need it again, and wonders how the Empress has fared during the wars.
Sadow orders his loyal Massassi to fall upon their Sith overlords, just as he once did with his enemies, and they create a barrier between the Republic fleet and Sadow's ship, exploding and stopping much of the pursuit of the Sith Lord.
Only the fastest of Teta's ships can pursue, and Sadow leads them to the Denarii Nova, which destroys the faster weaker ships and allows him to flee. Teta detects the explosions and believes Sadow to have also been destroyed, so returns to the Republic in victory.
Odan-Urr explores the wreckage of the Sith fleet, discovering a Sith Holocron, and pledges to set up a Jedi Library on Ossus where he once trained under Master Ooroo.
Sadow takes his ship to the Yavin system, discovering the fourth moon to be habitable, so lands there, ordering his meagre crew to start rebuilding the glory of the Sith Empire, and we see the starts of a massive temple being constructed around Sadow's landed ship.
Back on Cinnagar, for her part in the war, the Empress Teta grants Jori Daragon ownership of Aarrba's repair yard, and Jori is pleased to have more than she ever thought possible, thinking even the old Hutt would have been pleased.

High Points : Through no real fault of his own, Sadow's plans are repeatedly defeated and he is left fleeing aboard a single vessel, laying the groundwork for so much future history. We see the beginnings of the Massassi Temples on Yavin IV, which will much later become the home of the Rebellion during Episode IV: A New Hope, and we haven't seen the last of Sadow's machinations.

We also see Odan-Urr founding the Great Library of the Jedi on Ossus, which will play a major part in stories set later in the timeline, some within the Tales of the Jedi, but also into the Dark Empire trilogy of stories. We're really getting some of the universe building which made the Expanded Universe still so beloved by the fandom.

Low Points : Although this is the end of this storyline, and the end of the stories in the 5000 bby period, we're left with so many things undealt with. For example, while Sadow has fled, and the Sith Fleets have been defeated, Teta does nothing about the numerous worlds of the Sith Empire. Surely they have shipyards, and many personnel to rebuild their fleets and forces once again. It's possible that Sadow's order has killed all of the Sith Lords and left only Massassi behind, but we aren't shown that at all, so very quickly the Sith Empire could become a threat again.
Now this is a plotline I personally used in a Star Wars campaign, having these Sith relocate their entire empire to avoid Republic repercussions, and emerge once more when the Republic is fragmented and weakened after the Battle of Endor. So personally I'm grateful for it. And it's possible that this is where the Sith Empire from The Old Republic MMO comes from (although I've not played it, so aren't sure).

I'm also not happy with the ending, as Jori Daragon gets rewarded for her part in leading the Sith to the Republic, being granted ownership of Aarrba the Hutt's shipyard (whether he has any family to take ownership of it or not), and after her brother killed the Hutt who they'd both stolen from and treated with disrespect. And Jori even has the gaul to think that the Hutt might have been happy about this result. Well No Jori, I think he'd have been far happier to see you punished for your crimes against him, and to have not been murdered.

So what do you really think ? : A bit of a weak ending to the story, and I feel it could possibly have done with an extra issue to make the fall of Naga Sadow and the Sith Empire not so rushed. However that said, the speed at which it happens does allow Sadow to remain a good villain who is defeated but without making any stupid decisions or mistakes, but rather just by misfortune and the array of forces against him.

Final Words : So we've reached the end of the Tales of the Jedi stories set 5000 years before the battle of Yavin, and next time we move forward a thousand years to the 4000 bby time period.

These stories were solid and introduced an interesting segment of Star Wars history with it's own unique look. I mentioned before that the designs resemble human history with Egyptian and Roman tones with a Star Wars spin to them with the characters wearing robes and sandals, and the buildings looking like they wouldn't look out of place in a biblical tale. But it's also the little touches I loved, like the way that lightsabers weren't quite as advanced as those used in the movies with an organic look to them, and some of them requiring external power packs which were carried on the users belt, connecting the saber via cables.
It's all familiar, but gives the feeling of a more primitive version of advanced technology, and the look of ancient times, amazing work by the authors and artists.