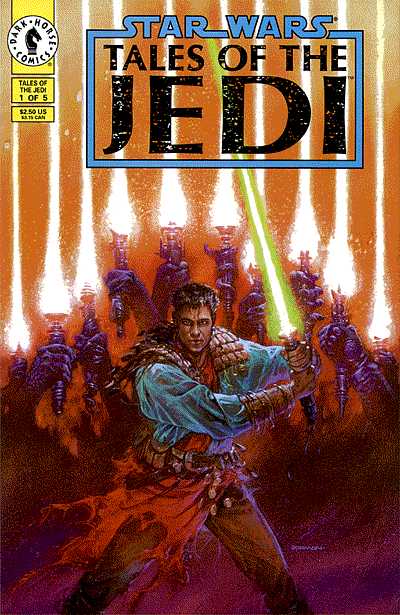 Ulic Qel-Droma and the Beast Wars of Onderon, Part 1

What is it ? : On the world of Arkania, the Jedi Master Arca Jeth is training his students, Ulic-Quel Droma, Cay Quel-Droma and the Twi'lek Tott Doneeta. Ulic is training against a droid, displaying talent but overconfidence when it manages to land a shot on him.
Afterwards Master Arca tells his students of the world of Onderon which has recently joined the Republic while Cay tinkers with his lightsaber tuning the blade. Onderon is a world whose moon touches its atmosphere from time to time, allowing the dangerous beasts of the moon to plague the inhabitants. This has led to the people of Onderon all taking up residence in a giant walled city called Iziz, which bristles with weapons. Over it's history, rogue elements have been banished from the city and left to the mercy of the creatures. However some of these outcasts managed to tame some of the beasts, surviving in the hostile wilderness.
Now Onderon is a world of constant war, as the Beast Riding outcasts raid the city, which relies on its high technology weapons to hold them at bay. Master Arca has been assigned the role of Jedi Watchman of the Onderon system, and sends his students as the Onderonian people have requested help in ending this centuries long war.
So they depart in Arca's vessel, The Nebulon Ranger and as they approach the walled city, they detect large birds on an intercept course, which turn out to be attacking Beast Riders. Rather than fight, Ulic races the ship for the safety of Iziz, and sets down, identifying themselves as Jedi to the guards. The guards however act with hostility to Tott Doneeta, trying to arrest him, but the situation is defused by an order from Queen Amanoa who wants the Jedi brought to her immediately, and she orders Tott released before introducing her daughter Galia.
She expected Arca rather than the three students, but senses the force within them, however before they can talk an aide rushes in and tells them all that the Beast Riders have found a weakness in the cities defences and are attacking.
The three Jedi fight alongside the Palace guard in defence, but 2 of the Outcasts slip past them to the throne room itself, and although Queen Amanoa attempts to use the power of Freedon Nadd against them, they manage to kidnap Galia and escape.
Amanoa is angered that the Jedi have allowed this to happen, and Ulic promises to retrieve her daughter, although Tott Doneeta is hesitant as he senses dark forces at play and doesn't trust the Onderonians.
They board the Nebulon Ranger and begin searching the wilderness for Galia, but Ulin senses an attack, but before they can raise the shields a missile strikes the ship from the surface with a large explosion . . . .

High Points : The highpoint of this issue for me is the detailed introduction of Onderon, and we get a lot of history of the world and explanation of the situation there before the heroes even set foot on the planet. Onderon has one of the most interesting histories and is a unique and detailed setting, and one I've used in my Star Wars campaign, and in fact was the entire setting of one of the Campaigns I've played in the past.

The writing is also very well done, because even though the Onderonians behaviour is explained away (they are recent additions to the Galactic Republic, so don't yet trust Aliens), they seem untrustworthy and Tott Doneetas mistrust seems well placed, especially after his mistreatment at their hands.

Low Points : This issue feels a little unbalanced, as we spend a leisurely first half of the issue being introduced to the Jedi and to Onderons history, but once the Jedi have arrived things start moving along almost too quickly.
They arrive, but are interrupted by the attack so rush off to deal with that, and then have to rush off to retrieve Galia. Now perhaps this is done on purpose, to keep the Jedi unprepared and without time to think and consider the situation, but instead just react. And if so, it's done perfectly, as the story moves too quickly to give each scene time to finish, instead leaving the characters to just rush out before things are resolved.

So what do you really think ? : A really solid start to this series, and given this was the first Tales of the Jedi story, it really sets up the era particularly well. Onderon is a fantastic setting, and well detailed from the start, and given it's been used in The Clone Wars series, it really does the writers credit that they created a hugely significant world and influenced the Star Wars universe in their very first issue.

Final Words : Since it's been over 20 years since I last read the Tales of the Jedi series, it came to me as quite a surprise that Ulic Qel-Droma and the Beast Wars of Onderon only consists of two issues, as in my memory it was much longer. However, I guess that I'm remembering this, and the sequel series The Saga of Nomi Sunrider and The Freedon Nadd Uprising, all as one story as I believe the first time I read them was in a compilation of all three stories.
And of course, Ulic Qel-Droma's story continues throughout the rest of this era on into Dark Lords of the Sith, The Sith War and finally into Redemption, so we'll be sticking with him for 20+ more issues.