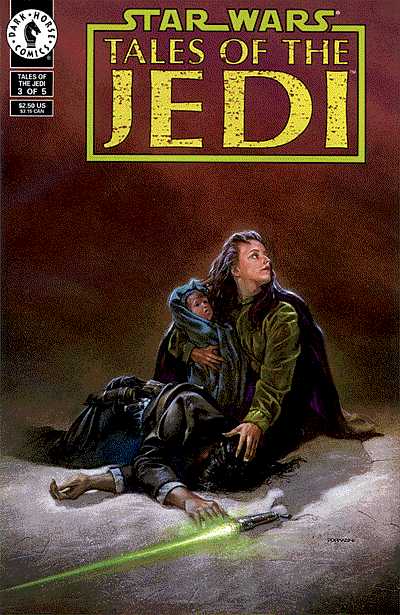 The Saga of Nomi Sunrider, Part 1

What is it ? : The Jedi Andur Sunrider is preparing to take his wife, Nomi, and his daughter, Vima, with him when he travels to meet Jedi Master Thon in the Stenness system with some Agedan crystals for lightsabers. They stop over at the Hyperspace waystation at the Stenness node where Bogga the Hutt hears of the valuable crystals Andur is carrying to send his men to ambush the Jedi and steal the crystals.
The thugs blame Andur's droid to knocking into them, distracting the Jedi while one of them sets a poisonous animal on him from behind, and he collapses. Nomi cries out in terror, but Andurs force ghost appears and guides her into taking up his lightsaber and she strikes down two of the thugs.
Andur's ghost then appears once more, advising her onto Master Thon on Stenness, where Nomi takes their ship, The Lightside Explorer.
Arriving on the player, she takes her daughter and starts hiking across the surface taking guidance from the force, until she encounters a hut and a Jedi, Oss Willum.
Oss feeds a large beast while he listens to Nomi's story, explaining that the tactic of distraction has often worked against the Jedi, but before Nomi can hand over the Crystals to him, they hear a commotion outside.
Bogga the Hutt and his men have arrived, and as well as wanting the Crystals, they have killed one of Oss Willum's flock of Staga, and are hauling it aboard Bogga's sail barge. Oss attacks, but is knocked to the ground, but before the Hutts men can kill him, the beast that Oss was tending to attacks forcing Bogga and his men to retreat. Oss thanks his "master", revealing that the beast is actually Jedi Master Thon who will train Nomi. . . .

High Points : Totally different in tone to the previous story arc, The Saga of Nomi Sunrider begins on a far smaller scale, and rather than facing down a fallen Jedi and the Dark Side Queen of a planet. Nomi faces against a Hutt thug and his men, and instead of the fate of a world being decided, it's just the life of her and her daughter.
This makes the story feel less epic, but far more personal, and it made me feel as if I was experiencing the galaxy on a far more personal level. From the point of view of an ordinary person rather than a high a mighty Jedi Knight.

I also adore the introduction of the Hyperspace waypoint stations, the story tells us of before Hyperspace routes could be plotted from world to world, they had to be plotted to various safe zones where the co-ordinates were known to be safe. So instead of travelling to your destination, you'd make a number of jumps between these safe zones until you were close to where you were going. These safe zones often had space stations constructed, to allow refuelling and resupply, as well as commerce to occur. As they have become less important they have fallen to crime and corruption.
I really love this concept, and have used it a few times in Star Wars campaigns, where abandoned waystations are great places for Rebels to hide, for criminals to operate and for the dregs of society to live on these broken empty structures.

Low Points : I feel as if they're trying to recreate the Yoda moment from Empire Strikes Back a little too much with Master Thon. He physically appears to be a large beast, being judged on his appearance, much the same as Yoda was by Luke at first. And although well done, I just felt a little conned by the deception, Fool me once, shame on you, Fool me twice, shame on me.

So what do you really think ? : While I love the entirety of Tales of the Jedi, it's the Saga of Nomi Sunrider I love best, she comes across to me to be a far more human character, and the fact that we're seeing the galaxy far from the throne rooms and Jedi temples (at least at this point), makes it more interesting to me.
Also the fact that she's a Jedi like no other we've seen, being a wife and mother, makes her more real to me as she has concerns beyond those rather ethereal and insubstantial ones of the Jedi such as the Light and Dark Side.
Although, I am not convinced by the slightly strange haircut she displays in this first issue with a large forehead decorated with two diamonds of hair.

Final Words : A really enjoyable start to the Saga of Nomi Sunrider, and one which will soon tie back into Onderon and Ulic Quel-Droma as events spiral out of control across the galaxy.