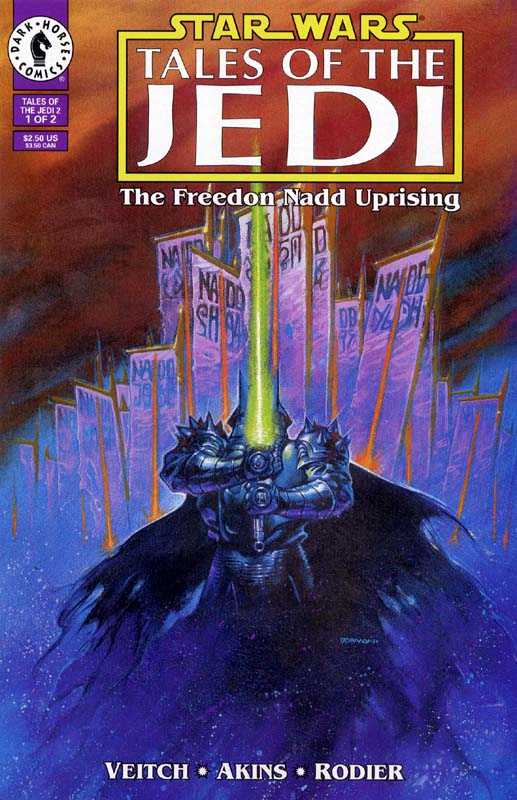 What is it ? : After the end of the Beast Wars, trouble continues on Onderon as worshippers of Freedon Nadd are causing civil unrest across the walled city of Iziz, and we begin with a view over the city with plumes of smoke from burning buildings rising into the air.
A procession leaves the Royal Palace as Jedi Master Arca Jeth has the remains of Queen Amanoa and Freedon Nadd taken to Tombs on one of the moons. The procession is led by newly crowned Queen Galia and her husband Oran Kira and they are met by Tott Doneeta who is arriving with Oss Wilum who is coming to help fight the Dark Side.
Master Arca looks tired and drained, explaining that some of the Naddist cult seem to be Dark Side Magicians and that all of the Jedi are feeling it. As they prepare to take the caskets to the moon of Dxun a mining machine cuts through the ground releasing a number of cultists, led by an armoured warrior wielding a lightsaber, Warb Null, and through sheer numbers they manage to make away with the caskets.
Queen Galia suggests they speak to her father, King Ommin, who is confined to a life support system, but still lives. The Jedi speak to him, and he summons the spirit of Freedon Nadd, revealing that it is he, Ommin, who has been permeating the city with the Dark Side. And imbued with strength from the Dark Side he attacks Master Arca. Warb Null bursts in with cultists, and while the Jedi fight him, Ommin makes off with Arca. Once Null is defeated, the Jedi, Ulic, Cay, Tott and Oss discover that the Royal Palace has also been seized by the cultists, so Oran Kira leads them to safety at the Beast Riders citadel outside the city and Ulic puts out the call for more Jedi and the Forces of the Republic to help put down the Dark Side on Onderon.
Meanwhile on Ossus, a Stronghold world where large numbers of Jedi live and train, Master Thon and Nomi Sunrider have arrived, and meet with Master Vodo, who helps Nomi build her own Lightsaber. She works alongside another student, Shoaneb Culu, who is a blind Miraluka who sees only through the force, Shoaneb's Crystal is flawed however and breaks, but Nomi shares some of her Adegan Crystals, which turn out to be the rarest kind, Pontites.
Nomi continues to train for weeks, when words comes in from Onderon of the rise of the Dark Side, and every student on the world volunteers to help, however only five are chosen, Nomi Sunrider, Shoaneb Culu, Qrrrl Toq, a Crown Prince Nazzar, Dace Diath a Human Jedi, and Kith Kark a Gotal.
On Coruscant, Republic Senators discuss helping Onderon, as some think that sending soldiers to interfere in the internal conflict of a world is wrong and that the Dark Side is the realm of the Jedi to deal with, while others support helping the Jedi. However nearby, two siblings, students of the Dark Side and heirs to the throne of the Empress Teta system, Aleema and Satal Keto, are visiting the Galactic Museum and find artifacts of the Sith and other Dark Jedi. Satal steals a book which is filled with formula's in an unknown language when he hears of the rise of the Dark Side on Onderon, and they decide to go there to meet with other Dark Sider's and get the book decoded before they are wiped out by the Jedi. And they take their Royal Yacht, emerging from Hyperspace in the blockade around Onderon. . .

High Points : One of the things I noticed early on is the bridges on Onderon, in Knights of the Old Republic 2, a large part of the plot is about storming the Royal Palace, the only ways of accessing is by large bridges over the city. I was delighted to see that these are completely right in continuity as they are a part of the plot of this issue. Although given the game came out after the comic, perhaps that should be a high point of the game rather than of this comic.

I also was impressed by some probably unconscious continuity, as the dark side on Onderon weakens the Jedi and cloud their abilities, in an extremely similar way to Yoda mentions during the prequels. Again this is probably not a conscious writing decision since the prequels were done after these comics, but it does make them all feel like one united universe.

I also like the glimpse into galactic politics we see, which again somewhat seems to mirror the prequels, with the Republic Senate torn over whether they should really be getting involved in what seems like a Religious schism.

Low Points : Although it's still building towards the galactic conflict which is going to dominate the next dozen issues, the series is beginning to feel a little busy with characters, with now over a dozen Jedi to remember, and numerous other Dark Siders and supporting characters, it seems as if a number of these are just being added to be cannon fodder later on in the story.

So what do you really think ? : Another solid issue, and things are starting to really move forwards, events on Onderon are having ripples out across the galaxy and we see the Jedi beginning to mobilise against the threat.

Final Words : The Freedon Nadd Uprising is only a two part story, but really it's only putting into place the pieces for later larger and more epic stories. But it's a fast moving story with an enjoyable look into this time period.