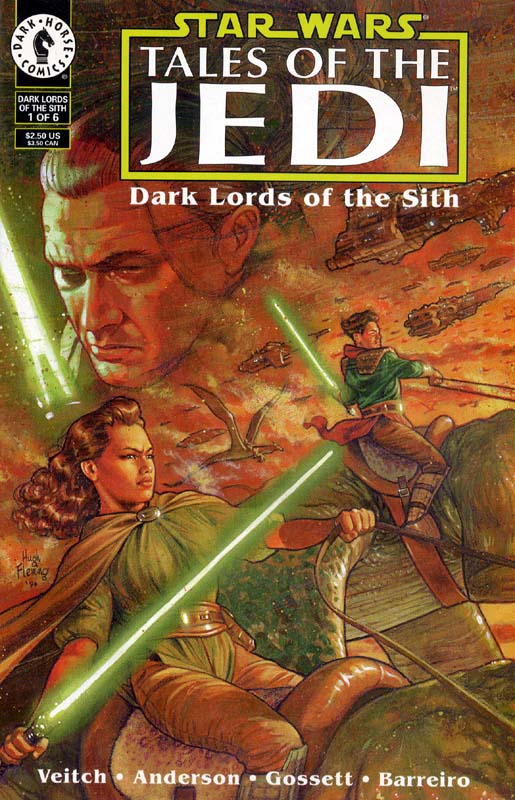 Dark Lords of the Sith 1: Masters and Students of the Force

What is it ? : We see a retelling of the tale of Naga Sadow, with some small changes, but it is revealed that we are actually seeing a Holocron teaching a Jedi Student named Exar Kun, his master, Vodo-Siosk Baas, chides him over looking into information which could be dangerous, taking him instead for lightsaber training.
Meanwhile in the Empress Teta system, Aleema and Satal Keto, interrupt an inspection of a carbonite freezing installation using Sith Illusion Magic they have learned from the Tome they stole from Coruscant and have decoded using the amulets given them by Freedon Nadd. Using illusions, they defeat their fathers guards, and proceed to torture and kill various dignitaries and lords including their father by dropping them into the Carbon freezing vats. Others they deform and use as servants as they plan to wipe out cities on KIrrek to consolidate their power.
On Onderon, the Jedi who defeated the Freedon Nadd Uprising are learning to ride Drexl, but are interrupted by Master Arca, who informs them about the events in the Empress Teta system, and reveals that the Keto siblings visited Onderon and King Ommin recently, and dispatches them to Ossus to inform the Jedi there of the events on Onderon. Arca plans to instruct Nomi in the art of battle meditation and then to send her and Ulic to the Empress Teta system to lead the Jedi intervention against the cult that the Keto's have formed, called the Krath.
Cay and Ulic check out some of the Sith Artifacts for removal to Ossus, but one of them activates and Ulic sees Freedon Nadd who informs him that Ulic will become of the one the Great Ones, but there is another who will be even more powerful.
On Dantooine, Exar Kun is training against a Cathar student named Crado, who acknowledges that Kun is the better fighter, which Kun informs him means he has already lost, as half the battle is willpower. Crado loses the fight, with Exar commenting it is no honor to beat Crado, but Crado telling him it is no dishonor to lose against a better opponent. And another Cathar, Sylvar is up against Exar next, as they fight Kun comments that "Animal" Jedi are no match for Humans, which enrages her and she uses her claws permanently scarring him across his cheek, and he prepares to strike her down as she tells him that while he may have fooled their master, that she knows that Kun is no Jedi.
Master Vodo intervenes, disarming Exar, but Exar boasts that he knows he could defeat his Master, so Vodo gives him Crado's lightsaber, and the two proceed to fight, Lightsaber against wooden staff.
Exar is confident he can beat his master, boastfully asking Vodo if he is sure he wants to do this, but Vodo proceeds to beat Kun with his staff, but Kun reaches out with the force, grabbing his original discarded Lightsaber, and attacks Vodo's staff, causing it to break under a flurry of blows.
Vodo ends the fight, telling Exar that he is his most formidable student, but he feels something is missing, to which Kun replies, "Only I know my heart".

High Points : The highpoint of this issue truly has to be the Vodo-Siosk Baas vs Exar Kun fight, the Jedi Master fights using only a wooden stick and does well, until Kun uses the weakness of the staff against his master, attacking and breaking it, leaving Vodo defenseless.
In my head this was always how Yoda should have fought in the Prequels, and giving him a lightsaber didn't seem right. A Jedi Master being able to use a simple staff against a lightsaber, holding it together using just the Force and being able to defeat an opponent seems far more powerful, while displaying a lack of need for weapons which seems far more Jedi-like to me.

I'm also massively impressed by Aleema and Satal Keto's use of the Dark Side, their illusions are disturbing, with their fathers bodyguards seeing their swords becoming masses of tentacles consuming the hands that hold them, one of their tutors tongues becoming a gross creature. This really does seem to be darker than we usually see the Sith acting. The fact that they calmly eat a meal with a severed head of one of their fathers advisors sitting on it, and stitched closed the mouth of another tutor, calmly dropping people into molten Carbonite, makes them disturbing and obviously evil.
Body horror has never really been a part of Star Wars before, but the Krath come across as more depraved and worrying than any we've seen before, as they are just experimenting with the power they've found, rather than having the discipline to use it as other Darksiders have displayed.

Low Points : I wasn't overly happy with Freedon Nadd's appearance to Ulic, we've already had foreshadowing that something bad is going to happen to Ulic, but this is just signposting it too obviously.

To a certain degree it appears that the Jedi have no way of dealing with Students turning to the dark side, which surely must always have been a problem. Exar Kun, and indeed Sylvar both act in anger during their lightsaber fights, and suffer no consequences. Master Vodo isn't shown to give them instruction, or even to hold back training to someone who could turn out to be extremely dangerous.

So what do you really think ? : I'd forgotten over the years exactly how good "Dark Lords of the Sith" is, and the introduction of Exar Kun is a fantastic one, as he stands out from the other characters from the very beginning, and the Krath are proving to be suitably horrific villains.

Final Words : It really is no wonder that the Tales of the Jedi series is so well regarded, it's got great imagery, loads of new ideas, and memorable characters. This really is Star Wars done right, and I can only hope that the authors of the new "High Republic" period take some lessons from these comics.