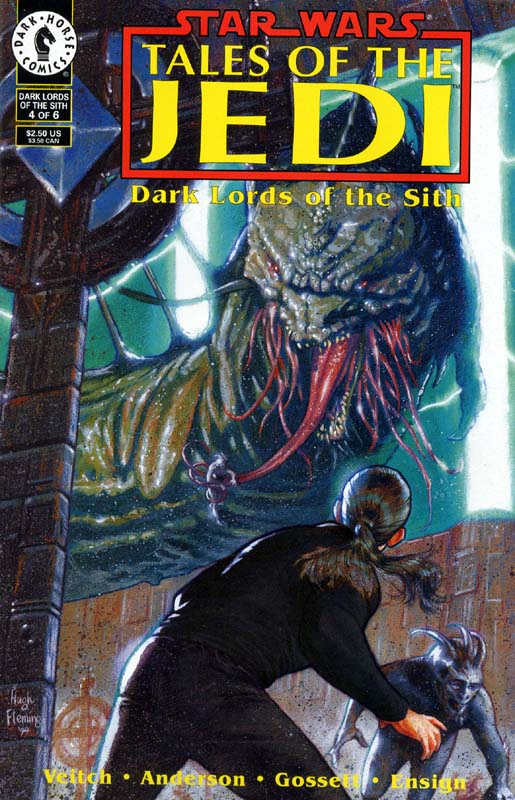 Dark Lords of the Sith 4: Death of a Dark Jedi

What is it ? : Following the trail given to him by Freedon Nadd, Exar Kun arrives on Yavin IV, where he ignores Nadd's warnings and is captured by the devolved descendants of Naga Sadow's Massassi Warriors. Their high priest recognises him, and Kun is taken to the Temple of Fire.
Preparing for his mission to the Empress Teta system, Ulic Quel-Droma seeks a history from the Jedi Master Ood Bnar on Ossus, before he departs however his brother Cay expresses concern they'll never see each other again, and Jedi Master Odan-Urr shows Ulic a Sith Holocron which tells him of other Jedi who tried to master the Dark Side and fell to it. Ulic departs in a captured smuggling ship, planning to infiltrate Cinnagar as it's owner.
Meanwhile on Yavin IV, the Massassi summon a massive Dark Side creature, but instead of fear, Kun believes he has finally reached the knowledge he seeks.
Ulic arrives on Cinnagar, and witnesses Satal and Aleema Keto sacrificing rebels into a Carbonite Smelter, unaware that they already know of his presence, and intend to manipulate him. Rebels against the Krath attack intending to kill the pair, and not wanting the source of the knowledge he seeks to be destroyed, Ulic ignites his lightsaber and defends the Krath, winning the trust of the pair, although Satal is jealous and suspicious of the attention his sister dotes on the Jedi.
On Yavin IV, Freedon Nadd advises Kun to focus his Dark Side through the Sith Amulet he took from Nadd's tomb, and Kun embraces the Dark Side once again incinerating the massive beast. Witnessing this display of power, the Massassi worship Kun as their new master, and Nadd begins advising him on how to use Naga Sadow's research to resurrect him.
Sick of the manipulation of his Sith Master, Kun uses the amulet to destroy Nadd's spirit, and in his last moments, Nadd sends a message to Satal and Aleema that the legacy of the Sith lies with them and Ulic, not with Exar Kun who is a pretender. . .

High Points : Moving the story on in an interesting fashion, we get Exar Kun finally tiring of the manipulation by Freedon Nadd, and turning on the Sith spirit. And Ulic Quel-Droma taking a step down the path to the Dark Side, defending the Krath against those they have conquered.

I'm especially impressed by the way this ties in with so much, from the Massassi temples on Yavin IV, through to the Sith Holocron found by Odan-Urr at the end of Fall of the Sith Empire. It really helps this become part of the larger Star Wars Universe and gives you a feeling of recognition and continuity.

Low Points : Ulic's actions are a little odd, I'm aware that he has expressed that killing Satal and Aleema won't destroy the knowledge they've found as it is too widespread already. But really we've seen no confirmation of this at all, as Satal and Aleema haven't taken on any apprentices, and in a very Dark Side way don't seem keen on sharing their power. So simply standing back and letting the Rebels kill the two would successfully end the Krath and the chaos in the Empress Teta System.
It seems to be a dreadful lack of tactical knowledge of Dark Siders and the way they work, since even if the Rule of Two is long from being established, Dark Side users really tend to hoard power and eliminate each other rather than work together.
The only two examples of Darksiders working together in any numbers, seems to by the Dathomirian Witches, and the Sith Civilisation, the second of which might be the source of Ulic's misknowledge.

So what do you really think ? : The story is getting really involving, as both Ulic Quel-Droma and Exar Kun are interesting characters, and we're seeing them fall to the Dark Side from their point of view, and while neither is going to be a hero in this story, they definitely are the protagonists in moving the story forwards and forming the core of this tale.

Final Words : Well two more issues of Dark Lords of the Sith to go before we begin Sith War, and this still only feels like the beginning of the story. My one criticism of the Tales of the Jedi stories is that so far they seem to be a lot of build up, with the stories ending quite abruptly without a particularly satisfying pay off. But we'll see how this and the next 2 stories work out, as it's been decades since I last read them and my memory is a little hazy on how each ends.