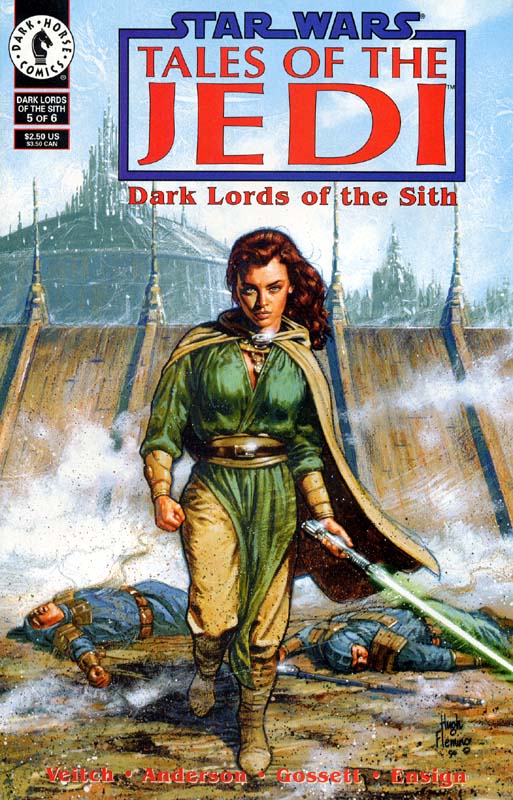 What is it ? : Ulic is a prisoner of the jealous Satal Keto who doesn't trust the Jedi, although his sister Aleema has fallen for him and believes that having a defector on their side will b useful. Ulic is strapped into a torture droid and is injected with a Sith Poison despite trying to convince Satal he has turned his back on the Jedi and embraced the Dark Side. The poison causes Ulic agony, and he breaks free lashing out with the force, and Aleema takes him into her care.
Meanwhile Exar Kun has his new Massassi subjects constructing great temples to act as focus points for the Dark Side, and explores the great temple further, discovering the buried starship that Naga Sadow arrived here aboard, filled with Sadows Alchemical equipment and experiments.
Nomi Sunrider, leaving her daughter in the care of Master Thon travels to the Empress Teta system with Tott Doneeta and Cay Quel-Droma aboard the Nebulon Ranger, sneaking down to Cinnagar in an escape pod. She displays her Jedi powers and allows herself to be captured in the hope they'll take her to Ulic, which they do. And testing Ulics loyalty, Satal orders him to kill Nomi, which he agrees to, at dawn the next day.
Back on Yavin, Exar Kun experiments with Sadow's alchemy by mutating the Massassi High Priest into a monstrous creature.
Ulic reprograms a serving droid to carry a message to Nomi, but a watchful Satal intercepts it, sending men to kill Nomi and assassins to deal with Ulic. Nomu uses her battle meditation to turn the men against each other and escape from captivity calling for Tott and Cay to come, while Ulic deals with the Assassin, and Aleema reveals that Satal often acts alone, including ordering the attack which killed Master Arca Jeth.
Cay and Tott arrive, but before Satal can react to the attack he is confronted by Ulic wanting revenge for the death of Master Arca. The pair clash, and Ulic is triumphant striking down Satal in anger, and in his last moments Satal reveals that it is the Sith Poison which is bringing out the negative emotions.
Before Tott and Cay can help Ulic, he pushes them away with the force, and they and Nomi escape on the Nebulon Ranger, as she feels that Ulic is lost to the Dark Side.
On Yavin IV, Exar Kun raises Naga Sadow's warship, preparing to deal with the Dark Side rivals he learnt about during Freedon Nadd's last moments. . . .

High Points : The two stories have for this issue taken different paths, with Exar Kun seeing the rewards of his efforts as he receives the knowledge of Naga Sadow, secret knowledge which has always been his goal, even if he feels that he must now fight to keep it.
Meanwhile Ulic is undergoing torture, not only physically at the hands of Satal and the Sith poison injected into his veins, but also emotional as he must turn on Nomi and his own brother Cay.

The Sith Poison is also a brilliant idea, because if anger leads to the Dark Side as Yoda said in the movies, then a poison which causes emotional rages and outbreaks of anger seems like the perfect weapon to use against Jedi. Make them fall to the Dark Side due to their own emotions, and a Sith Poison which is resistant to a Jedi using the Force to detoxify it makes complete sense.

Low Points : Ulic's behavior isn't convincing that he has turned to the Dark Side, so Aleema seemingly totally believing him doesn't seem believable. Satal seems to be far more sensible, and even gets evidence that Ulic hasn't turned on the Jedi, but doesn't use it to convince his sister. In fact Ulic finally turning to the Dark Side is due to Satal, who is definitely the more practical of the two Krath.

The relationship between Nomi and Ulic also seems a little forced to me, the story is clearly making out the two are in love and Ulic is turning on her. But truly the two barely know each other and Nomi is still somewhat grieving for her husband,
And turning her into Ulic's love interest, trying to save her love, weakens Nomi's character, turning her from a strong independent mother, into something far weaker and less interesting. And is seemingly just being done because that's how stories work, with the lead male and female always falling in love.


So what do you really think ? : The story continues to impress, and we're leading towards a real conflct with the two branches of Darksiders coming towards a fight with Ulic and Aleema against Exar Kun, and to tell the truth I'm rooting for Exar Kun as he is the more interesting character.

Final Words : So one more part of Dark Lords of the Sith to go, and while I roughly remember how it resolves, I have no idea of the actual events of the next issue, so I'm definitely intrigued as to the details.