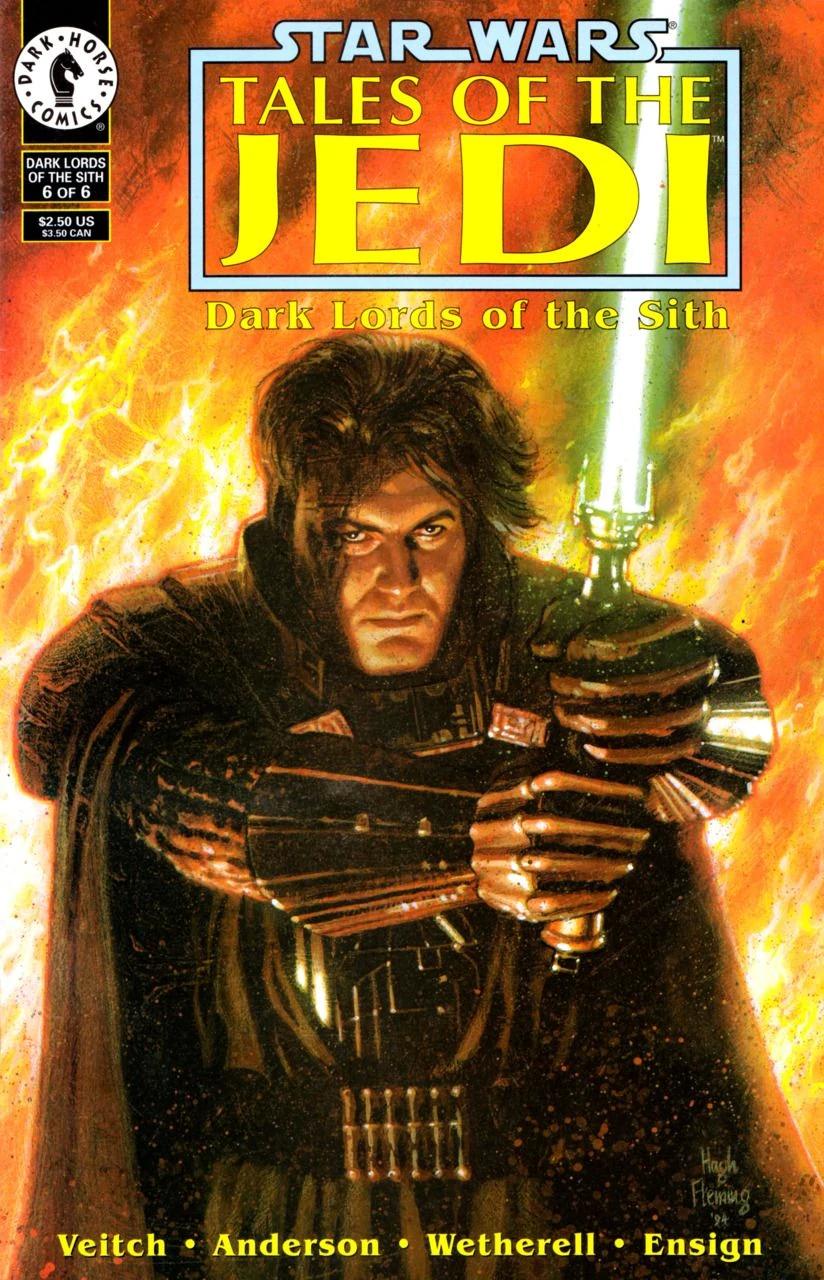 What is it ? : Flying over the surface of Ossus, Cay Qel-Droma and Dace Diath are testing new Jedi Star Saber starfighters, however the controls are sluggish, and Dace's fighter crashes with the other Jedi believing him dead, until he levitates himself down from the sky having bailed out at the last second.
Cay and Nomi Sunrider are planning a raid on Cinnagar to rescue Ulic Quel-Droma who they know has been given a Sith Poison which is unleashing his anger and turning him to the Dark Side. The Jedi Masters meet with the group of Jedi Knights who are heading up the attack, along with Beast Riders from Onderon who are going to help. The Masters recommend leaving Ulic to his course, as a Jedi is always free to make their own decisions and it is not possible to coerce a Jedi to staying with the Light Side, plus it is possible that Ulic will teach himself a lesson before the end.
Meanwhile on Cinnagar Exar Kun has arrived, and is searching for his Sith rivals, when Aleema gives Ulic a Sith Amulet which matches the one Exar has, and the two begin to glow. But before he can act, the Jedi assault begins, and Starfighters roar overhead, as Beast Riders attack the city.
The Jedi Starfighters take out defensive turrets, allowing the Beast Riders to land the palace directly, allowing the Jedi on the ground to reach Ulic.
They attempt to take Ulic by force, with Nomi and Aleema clashing over Ulic's heart. Aleema unleashes illusions at the Jedi, but Nomi's battle meditation causes her will to fail and the illusions to fade, and Aleema cowers behind Ulic as Nomi declares her love for him.
Outside, Oss Willum spots Exar Kun walking through the Chaos toward the palace, and recognises his power, but predicts that one day he will learn from the Jedi he sees.
Cay and Nomi try to convince Ulic to return with them to Ossus, or go on some grand space adventure across the galaxy than remain in the heart of darkness here on Cinnagar, but Ulic lashes out with the Sith Amulet, and Nomi finally sees that there is no way to change the course he has chosen. Nomi convinces Cay to leave with her, and the battle ceases as the Jedi retreat.
Ulic and Aleema watch the Jedi leave, but then Exar Kun enters the room, declaring them to be his enemies, unleashing a blast of energy at Aleema knocking her unconscious, as Ulic and Exar's Lightsabers clash. As the two fight, their amulets begin to glow, and they reveal a message from the previous Dark Lords of the Sith who tell the two to cease their fighting.
The spirits declare Exar Kun to be the new Dark Lord of the Sith, and Ulic Quel-Droma to be his apprentice, burning sigils onto the foreheads of the pair. And as Aleema awakens she sees the two clasping hands united into bringing down the galaxy together, and she looks on recognising that two are rippling with more Dark Side energy than all her Sith magic had given her. . . .

High Points : Wow, this remains as powerful today as when it was published back in the 1990's, the clash as Ulic falls further to the Dark Side is exciting and action packed, and the twist as Ulic and Exar become united at the call of the Dark Lord of the Sith is fantastic.

It's also an amazing looking issue, the new Star Saber fighters look excellent, and we get loads of Sith magic and Jedi battle meditation as the two sides of the force clash against each other.

Low Points : Once again I'm pretty critical of the relationship between Nomi and Ulic, which really grew from nowhere, we've only seen them together for a few panels, but we're expected to believe that Nomi is now fully in love with Ulic. It really weakens her character as she now just comes across as a love sick girl, rather than the powerful Jedi and mother that she really is, and her husband Andur seems to be totally forgotten already.

I'm also pretty critical of the Jedi Masters, they're completely fine with Ulic exploring the Dark Side as every Jedi is free to take their own path. But this really seems to be a weak position, putting the Jedi very much on the reactive side of things, only fighting the Sith and the Dark Side when it causes harm rather than proactively trying to seek it out and eliminate it. While I can completely understand them when they say you cannot coerce someone into staying on the Dark Side, surely you can actively stop them seeking the Dark Side?

So what do you really think ? : A brilliant ending to this story, and setting the ground firmly for "Sith War" as Ulic and Exar turn on the galaxy and the fighting really begins.

Final Words : So that was it for Dark Lords of the Sith, which my memory made me think referred to Ulic and Exar, but actually referred to the ancient spirits which finally bring the two together.