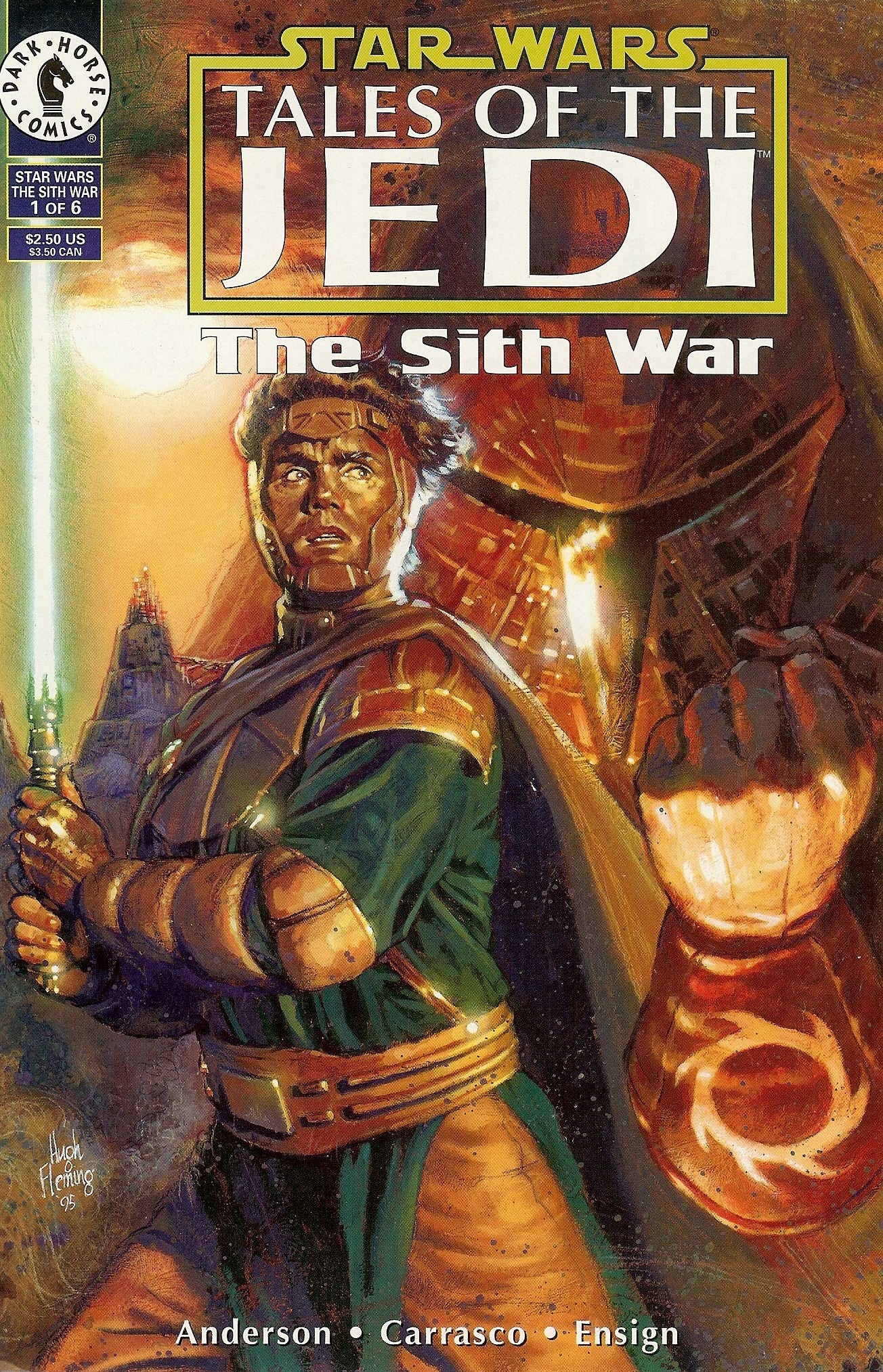 The Sith War 1: Edge of the Whirlwind

What is it ? : Six months have passed since the alliance between Ulic Quel-Droma and Exar Kun was formed, and the Empress Teta system is under attack. Not by the Republic, but by Mandalorian Raiders who see the system as weakened and vulnerable from the conflict there. The leader of the Mandalorians, wants to challenge himself by fighting a fallen Jedi, and the two agree to personal combat with the fate of the system in the balance.
Meanwhile, Exar Kun has arrived on Ossus, and is speaking to apprentices about learning the ways of using the force he has learned, telling them it is lost Jedi knowledge, and pointing out the failures that the masters have made against Freedon Nadd and the Krath. He also listens in to a conversation between Nomi Sunrider and Odan-Urr where the Jedi Master talks about the knowledge within the Sith Holocron he captured during the Fall of the Sith Empire.
The Mandalore and Ulic face off on an arrangement of massive chains between the remains of buildings, allowing them to fight over various levels, Ulic has chosen his lightsaber, while Mandalore has chosen as his weapon his Basilisk War Droid. Ulic easily gets the upper hand, and Mandalore challenges him to fight not using his lightsaber but each of them using a Mandalorian Axe, but Ulic defeats him, and Mandalore pledges himself and his armies to Ulic.
On Ossus, Exar Kun confronts Odan-Urr for the Holocron, and the Jedi Master fights him back using the force, however he is old and his powers falter in the face of the new Dark Lord of the Sith, and he becomes one with the Force. Apprentices coming to pledge themselves to Exar find him standing over the robes, and ask of Odan-Urr, and Exar lies to them that the Jedi master passed his legacy including the Holocron to Exar making him a Jedi Master.
In the Foerost System a massive transport ship comes out of Hyperspace requesting repairs, but reveals itself to be an illusion of Aleema Satal's creation, hiding the combined forces of Ulic and Mandalore, who rapidly seize the shipyards and 300 Republic Capital ships under construction there.
Exar contacts Ulic, and explains how he now has 20 Jedi students, but Ulic scoffs at this meagre force compared to the fleets of starships he now commands and 2 full armies, revealing that he intends to raid Coruscant and show how weak the Republic really is. Exar warns against this, but Ulic plants information in the raided shipyards, which means the Republic think his next attack will be in the Kemplex system, and divert their forces there. . . .

High Points : An excellent start to this arc of stories, and the first time we got to see the Mandalorians, even if they are a very different version of them. The two different methods of falling to the Dark Side continue from Dark Lords of the Sith, with Exar still more interested in accumulating knowledge and power through that path, and Ulic falling through his bravado and fearlessness.

The illusion that Aleema Satal uses for the attack on the Foerost Shipyards I found very reminiscent of that used by Grand Admiral Thrawn on the Fondor Shipyards during the Thrawn Trilogy, although Thrawn hides his vessels inside a real ship, just cloaking them from being detected. And while this could be seen as the writers stealing a concept from the books which came out 4 years earlier, I like to think of as Thrawn having studied history and adapting and using the tactic himself.

Low Points : I was surprised by the path chosen for some of the Jedi, with Cay Quel-Droma listening to Exar Kun's stories, and Oss Wilum actually being convinced to become his student. This seems out of character for those that once challenged Exar under the guidance of Arca Jeth, and I would especially have thought of Cay being very skeptical of anything which leads towards the Dark Side.
Although, perhaps the fall of his brother has shaked his belief in the Jedi Masters enough to be swayed by another way.

I've marked this issue down due to a change in the art style, which is still stunning, but seems cluttered and a little messy in comparison to the previous chapters, but it may grow on me.

So what do you really think ? : The Mandalorians as seen in The Sith War are very different from those we've now seen in other media, even so far as being shown to be non-humans later on in the story. I retconned this in my Star Wars campaign by saying this was a raiding party away from their homeworld, and had recruited from other species. A solution which is similar to that given by other sources now, especially after the revelations of the Mandalorian series which shows them accepting other species into their number.

Final Words : An excellent start to this story arc, with everything bursting into action, Exar is turning Jedi to his will, while Ulic and Mandalore are building a force to challenge the Republic and launch an attack on its capital, which we shall witness in the next issue "The Battle of Coruscant".