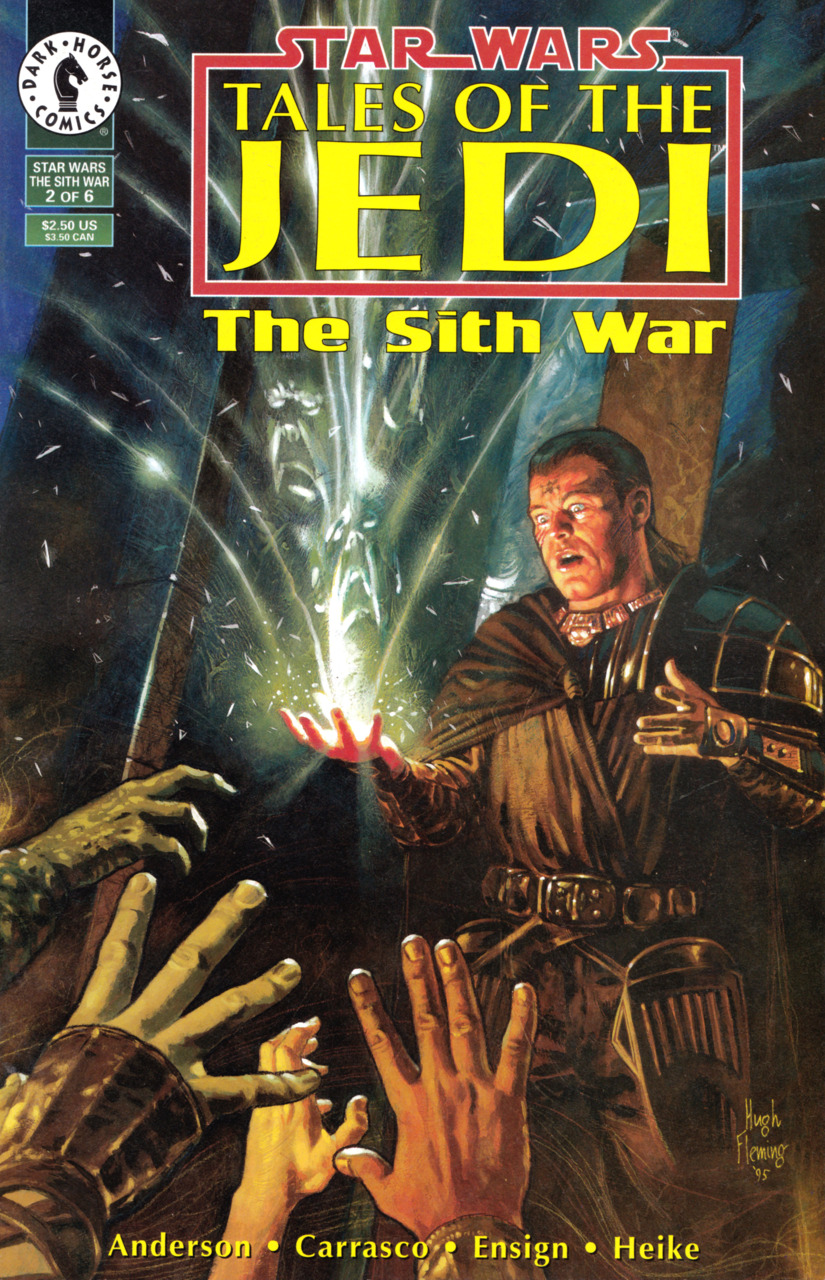 The Sith War 2: The Battle of Coruscant

What is it ? : Jedi Master Vodo-Siosk Baas arrives on Coruscant with Nomi Sunrider and Cay Quel-Droma to inform the Republic about Ulic Quel-Droma leading attacks on the shipyards. But the information arrives from Foerost about his raid there, and the false information he left for them to prepare for an attack on the Kemplex system. But Shoaneb Culu, the Miraluka Jedi senses the gathering Dark Side around Coruscant as Ulic's Krath and Mandalorian fleet attacks.
Meanwhile Exar Kun and his Jedi recruits arrive on Yavin IV where he shows the splendour of the Temples his Massassi followers have built, but when they react to the Dark Side that surrounds the planet, they are attacked by Massassi. Kun tells them that although the world is cloaked in the Dark Side, he is reclaiming it for the Light, and reveals that the Holocron he took from Ossus is actually a Sith Holocron, which he shatters destroying it, but the shards lodge in the various Jedi, corrupting them, with only the Jedi Crado willingly joining Kun.
The defenders of Coruscant are outnumbered by the Krath and Mandalorian forces of Ulic Quel-Droma, and while Mandalore leads his forces to capture new weapons developed by the Republic, Ulic himself heads ot the control center, forcing the commanders to order their ships to the same coordinates where they will crash and be destroyed.
Seeing Jedi closing on Ulics position, Aleema Satal betrays him, ordering the retreat of the Krath and Mandalorian forces and making Mandalore her warlord. Ulic confronts the Jedi as they enter the war room, and pulls his lightsaber, but the Jedi use the force to disarm him and his forces, and Master Vodo-Siosk Baas and Nomi Sunrider surround him with a Wall of Light which cuts him temporarily from the Force, allowing him to be captures, to which the Supreme Chancellor of the Republic declares he will be put on trial and put to death for his crimes.
Back on Yavin, Kun tells Crado that the other Jedi have absorbed the essence of the Sith exiles, and will serve him in a different manner, sending them out into the galaxy to show the Republic to never underestimate Sith power.

High Points : The action is unrelenting as the Battle of Coruscant rages, while Exar Kun turns the Jedi to his will. The battle is action packed and detailed enough to give you a real flow of what is happening, rather that just being groups of soldiers shooting at each other. Ulic's forces are overwhelming and can march around Coruscant at their will, or at least until Aleema abandons Ulic, leaving him at the mercy of the Jedi who arrived to warn the Republic about him.

I'm also impressed at the fact that Mandalore isn't just a henchman, and we get glimpses of his own plans and desires, as he takes advantage of the attack on Coruscant to get his hands on some of the latest Republic weapons to better equip his men. He could so easily have just been a faceless grunt following orders, but really adds to the story by giving Ulic's forces another motivating force behind it.

I'm also impressed by Exar Kun's lies on Yavin, telling the Jedi who detect the Dark Side, that it is the entire reason he is there, to cleanse the world. Which seems such a reasonable explanation, especially considering that Master Thon chose his home for the same reason, a Dark Side place to drive the Dark Side from. He also "proves" this to them by destroying the Sith Holocron, after all, wouldn't a Jedi want to destroy a Sith artefact rather than hanging onto it for a thousand years like Master Odan-Urr had. This all seems so reasonable, and even if he hadn't used the spirits within the Holocron to turn the Jedi, I could have seen him continuing to convince them of his actions and slowly turn them to the Dark Side.

Low Points : The really is a story about the Sith and it's champions, as we've got Ulic, Mandalore, Aleema, Exar, Crado all becoming key parts of the plot, but no real Jedi showing any personality beyond Cay Quel-Droma, who's just worried about his brother. Nomi Sunrider, a character I adore barely does anything, only aiding Master Vodo in forming a Wall of Light around Ulic late on in the issue. The Jedi are really just phoning it in at this point, showing their faces but not doing anything much except reacting.

So what do you really think ? : This still only feels like the beginning of the story, with Exar still building his forces, rising to power, rather than causing chaos across the Galaxy like Ulic is. However, this does look set to change with the next issue, as Exar sends his corrupted Jedi out to remind the Republic of Sith power.

Final Words : It's funny what having not read these comics for 20+ years does to my memory of them, as everything which has happened seems to be to be just build up, and I have a feeling that so much is still to occur, but we're running out of issues before the end of this series. I'll be interested to see if my memory is right, and how well is all unfolds, or seems rushed to pack everything in.