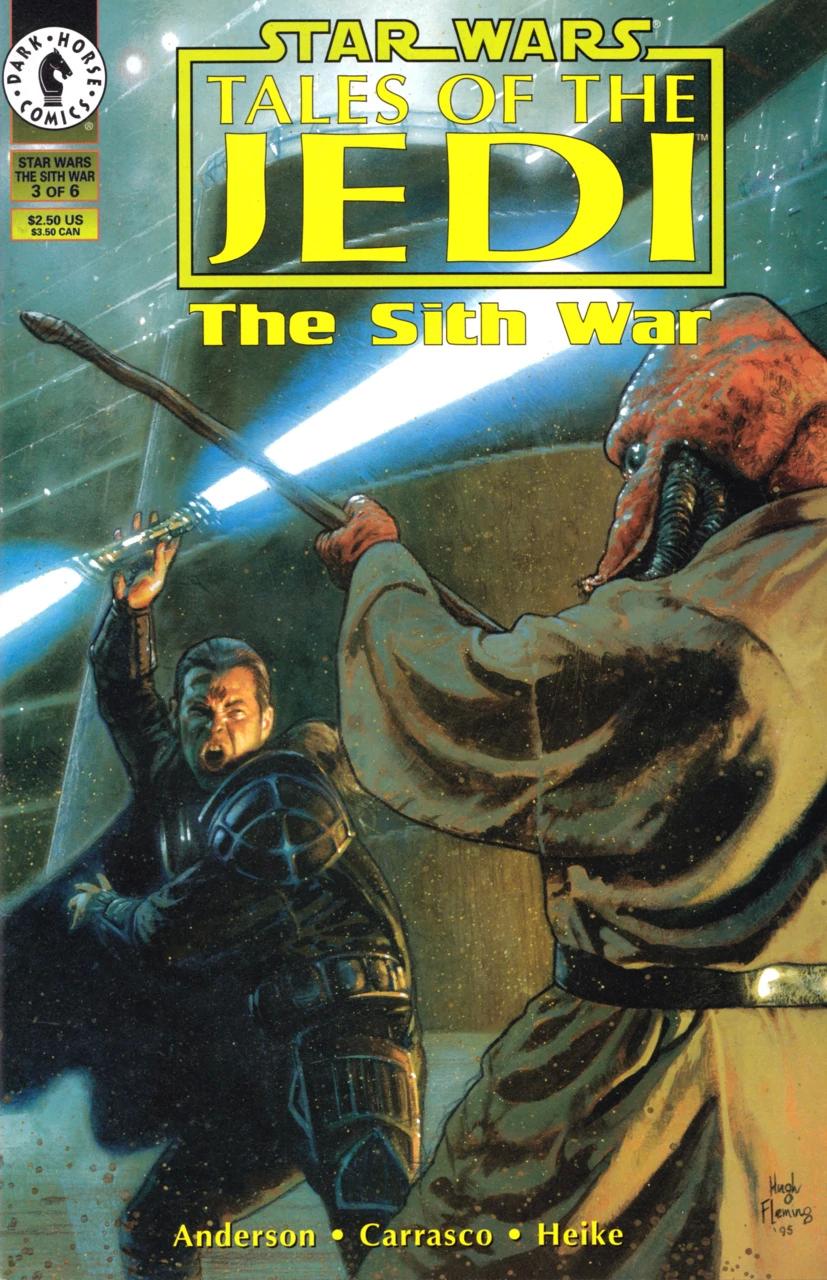 The Sith War 3: The Trial of Ulic Qel-Droma

What is it ? : On the world of Dantooine, Jedi Master Vodo-Siosk Baas ponders the events unfolding across the galaxy, and how his student Exar Kun is at the heart of it all. He comes to the conclusion that he has failed his student and must now pay the consequences of this failure, and that Ulic Quel-Droma, about to stand trial for his actions is just a victim, and that he should travel to Coruscant to set things right.
On Cinnagar, Aleema is reinforcing her control over her forces, feeding some commanders loyal to Ulic to her pet creeper. Meanwhile Mandalore is studying the events of the battle, trying to find how they were defeats, and coming to the conclusion that Aleema ordered the retreat before the tide of battle had turned, abandoning Ulic to the Jedi. He approaches Aleema not with his conclusions, but instead with a plan to rescue Ulic, but she refuses, saying that he will just be reprimanded by the Jedi and he will soon return to their ranks and forget about them. She tells him that with Ulic captured, and Exar Kun concentrating on his new Jedi recruits, the war is down to the two of them, and she orders an attack on the Kemplex system, now that the Republic knows the information about an attack there was false, they'll have moved their forces away, making the system vulnerable again.
On Coruscant, Cay Quel-Droma and Nomi Sunrider race across the city to the trial of Ulic, Cay planning to speak out for his brother, and how the Krath poisoned and turned him, but Nomi is not convinced, and says that Ulic is not the man she once knew, and then silently adds "and loved".
Exar Kun on Yavin IV sends his corrupted Jedi to strike against their Masters, to collapse the Jedi order and make way for his new Sith Empire, Crado asks whether he is to attack his Master, Vodo-Siosk Baas, but Exar instead sends him with Oss Wilum to attack Master Thon, saying that he will personally deal with Master Vodo.
Mandalore arrives in a shuttle, and tells Exar that Ulic has been captured, and Exar reluctantly agrees to help rescue him, if only to teach him a lesson about following Exar's orders, and they depart with Massassi Warriors aboard Naga Sadow's ancient warship, The Corsair.
The trial of Ulic Quel-Droma begins, with the Supreme Chancellor of the Republic reading a long list of charges against Ulic, but Ulic is defiant, telling the gathered Senate that the glory of the Sith Empire will grind the Republic to dust. Cay tries to speak up for his brother, telling them that he was disturbed by the death of their Master, Arca Jeth, and went to infiltrate the Krath, but they warped him. Ulic dismisses his brothers defence, saying that he just doesn't understand, but proceedings are interrupted by the entrance of Exar Kun, Mandalore and some Massassi Warriors.
Exar uses Sith Magic to freeze all of the Senators in place, and then unlocks Ulic's chains, as Mandalore apologises for being late, impressing Ulic with his devotion. Nomi tries to reason with Ulic, but he warns her not to interfere, or he will have to hurt her.
While the Jedi skirmish the the Massassi, Exar dominates the Supreme Chancellors mind, getting him to praise Exar's new Sith Empire, and denouncing the Republic, while Cay tries to reason with his brother, but Ulic warns him he'll have to kill him if he gets in the way.
Amidst all of this, Jedi Master Vodo-Siosk Baas enters the hall and confronts Exar Kun. Kun offers Vodo a place within his Sith Empire, but Vodo refuses, but Exar reminds the Master that he once bested him in combat, and offers to surrender and take whatever teaching Vodo deems necessary if he loses, but Vodo is to join him, if Vodo loses. But Vodo says he could never join the Sith, so Exar ignites his lightsaber and the two begin to duel anyway.
The two fight once again, Vodo's wooden staff against Exar's Lightsaber, but Exar reveals he has modified his lightsaber, and a second blade activates from the base of the saber. The powerful blade smashes through Vodo's staff, striking and killing the Jedi Master.
The Jedi Knight Sylvar leaps at Exar, in revenge for her master and demanding to know what has happened to her mate Crado, but Exar dismisses her with the force, flinging her back with a gesture. He then gathers his forces and departs the chamber, accompanied by Ulic and Mandalore, declaring that the Senate is powerless and the Sith Empire now controls the galaxy. . .

High Points : While it's easy to just see the Master Vodo vs Exar Kun fight as the highlight of the issue, mainly due to Exar using his Double Bladed lightsaber (some 4 years before Darth Maul uses his in The Phantom Menace). But the entire scene is fantastic, Exar puppeting the Supreme Chancellor while holding the entire Senate in place, just shows his power, he displays the Jedi's weakness and inability to stop him doing whatever he wants.
Wandering into the Senate itself, freeing Ulic, and killing a Jedi Master in front of them, is a massive display of power, which should level no doubt in the Senators heads how dangerous he is, and how dangerous it is to oppose him.

I also have to complement the political moves of Aleema Satal, while it is easy for writers to show Dark Side uses as a unified force, so there's bad guys and good guys fighting. The nature of the Dark Side is for each of them to grab for power, which makes Aleema's attempt to get rid of Ulic, ignore Exar, and just conquer the galaxy for herself, make a load of sense, and it really adds to the continuing storyline as it remains to be seen how Ulic will deal with this betrayal.

Low Points : The very beginning of the issue confuses me slightly, as not much time seems to have passed since the capture of Ulic Quel-Droma and the battle of Coruscant. Aleema and Mandalore have returned home, and Exar Kun is still preparing his turned Jedi for their mission. However, Jedi Master Vodo-Siosk Baas, who was present for the Battle of Coruscant, has now travelled to Dantooine, to meditate for a short while and come to the decision that he should return to Coruscant for Ulic's trial where he knows he will confront Exar Kun.
There's a lot of travelling going on here, couldn't the writers have just had him meditating on Coruscant? And then travelling across the city to the trial? Although Star Wars is supposed to be galaxy spanning, it just feels like they forgot that he was already present, so had to show him deciding to travel there.

So what do you really think ? : An absolutely stunning issue, and one that is pivotal for the entire Star Wars universe, as the Double Bladed Lightsaber is going to be the coolest weapon from here on out.
I absolutely adore the Exar Kun vs Vodo-Siosk Baas fight, not only because of the reveal of the Double Bladed Lightsaber, but also because of the Jedi Master fighting only with a wooden staff. Which just seems so right for a Jedi Master, that somehow using the Force to bind the staff together against the lightsaber blows, just seems correct for a power that "binds the galaxy together".
The idea that a Master doesn't need a Lightsaber, just echoes Yoda's statement that "war doesn't make one great", and therefore carrying a sword around all the time seems out of place.
But a master who can predict all attacks, and swing just a wooden staff into place to deflect the blows, and hold that fragile piece of wood together against the energy of a lightsaber, seems far more peaceful, and far more powerful than just jumping around swinging a sword, and therefore this fight really demonstrates what I wanted and expected from Yoda's fights in the prequels.

Final Words : So the Sith are reigning supreme. They can walk into the Senate itself and free one of their number, even when confronted by a group of Jedi Knights, and a Jedi Master. Exar Kun truly has taken the Sith to greater heights of power than even Naga Sadow.
But with only three issues to go of The Sith War, he's now got a long way to fall.