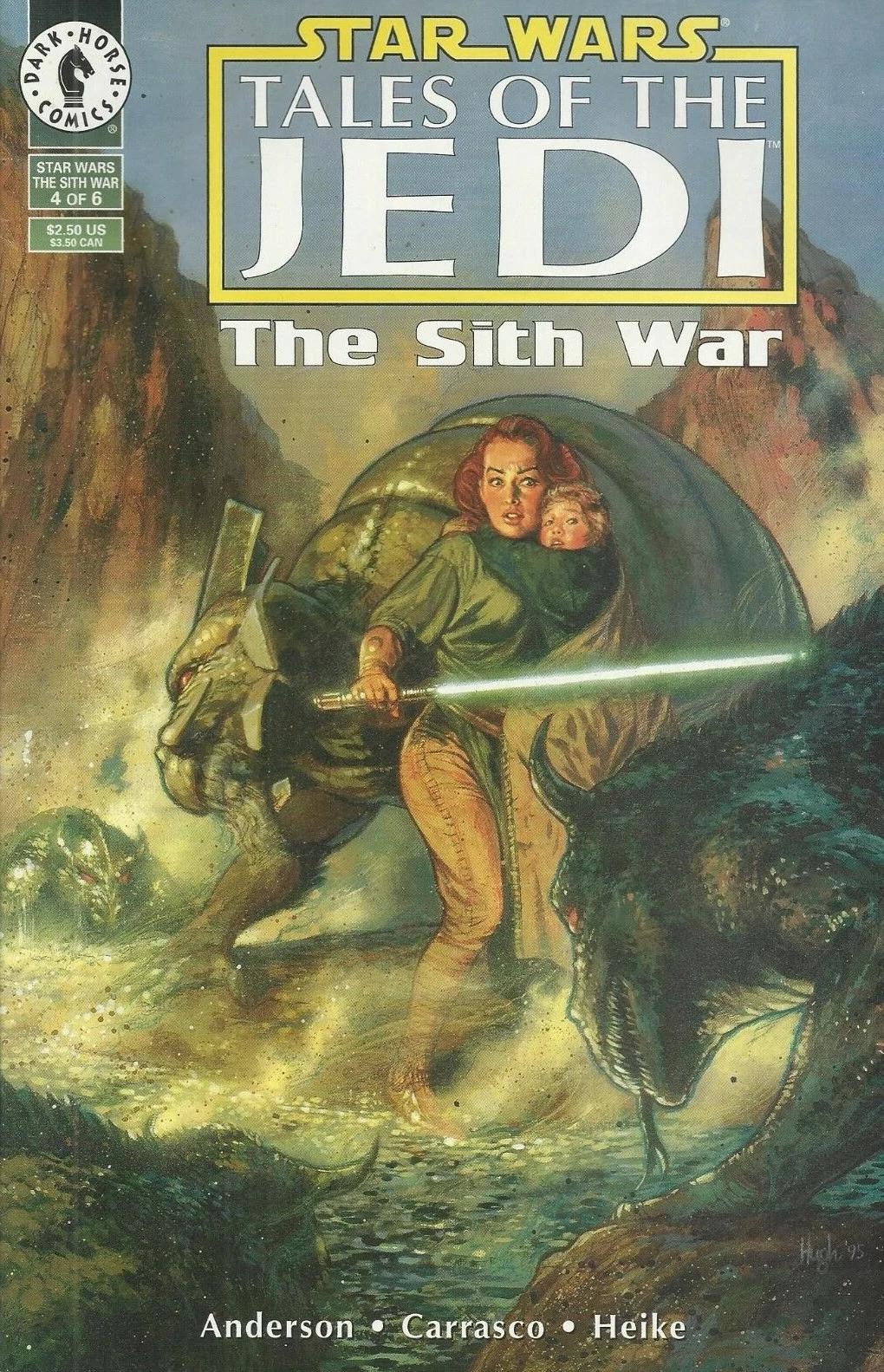 What is it ? : After his rescue from his trial by The Republic,Ulic Quel-Droma arrives on Yavin IV with Mandalore and Exar Kun, where Mandalore warns Ulic about his betrayal by Aleema Satal, who soon arrives as well. Ulic hides his reaction to the news, and tells Aleema that she will have the honour of leading their next attack.
Meanwhile, Nomi Sunrider and Sylvar arrive on Ambria to visit Master Thon, seeking his advice after the events on Coruscant, but unknown they are observed by Crado and Oss Wilum who has been turned to the Dark Side by Exar Kun. Wilum visits the Dark Side lake, and summons several Hssiss from it's depths to attack the Master and Students. The Jedi fight back, and Nomi uses her Battle Meditation to defeat the monsters, leaving Sylvar to face off against her mate Crado, scarring his face with her claws, much as she once did to Exar Kun, causing him to flee. And Master Thon manages to capture Oss Wilum, wondering how he failed his student, then wondering how the other Masters have fared as they are assaulted by their own students.
We then are shown a montage of attacks across the galaxy, as corrupted students turn on their masters killing many of them.
Crado returns to Yavin IV apologising for his failure to Exar Kun, who forgives him and makes him Aleema's Military Commander in the next attack on Kemplex. He shows Naga Sadow's warship, The Corsair, to Aleema showing her how to operate a weapon which will allow her to devastate the Republic fleet she will surely face there.
The Jedi meet on Ossus to discuss the attacks on the Masters, and Tott Doneeta warns them of the attack on nearby Kemplex, they rally the Ossus defence forces to bolster the forces there, but Master Thon warns that he suspects this is just a feint, as there is nothing at Kemplex that Exar Kun and Ulic Quel-Droma want, but it weakens the defences of Ossus where there is everything they want. So only three Jedi Knights lead the forces to Kemplex, Qrrrl Toq, Dace Diath and Shoaneb Culu.
Arriving there they detect the Sith Warship hiding within the Cron Cluster, and as the Jedi and Republic forces approach the ancient vessel, Aleema uses the weapon to tear the heart from one of the Stars of the Cluster and hurl it at their enemy, incinerating them instantly.
Before she can gloat too much, Crado detects that the Star they ripped the heart from it collapsing, and it's detonation destroys not only the Sith Warship with Aleema and Crado aboard, but also causes the supernova of the other 9 stars of the cluster, which unleashes a wave of devastation against nearby world including Ossus.
Wit their plan successful, and the Republic forces destroyed, and Ossus left undefended, Exar Kun and Ulic Quel-Droma immediately head there to plunder the Great Library of Ossus before the world itself is burnt by the fire they have unleashed. . .

High Points : Although it doesn't seem to work exactly the same way, it's nice to see the same weapon that Naga Sadow used to escape the Republic back in The Fall of the Sith Empire return and used to devastating effect against the Republic once more. And the differences can easily be accounted for by Sadow having perfected the weapon during his exile on Yavin IV.

The montage of Jedi Masters vs their corrupted Students is also an absolute high point of the issue, showing Master after Master falling to Exar Kun's plan. And while it might have been nice to see more on how some of the Masters couldn't bring themselves to fight their students, or were taken completely by surprise, to help clarify how well Exar Kun's plan worked. Keeping it as a brief frame or two of each of the Masters being struck down is extremely impactful and spells out the scale of the disaster for the Jedi Order.

Low Points : Aleema seemingly walks to her death in this issue, as surely she knows that her betrayal of Ulic is known, since Mandalore is standing next to Ulic when she arrives. The only thing I can think of is that she knows she has little choice in the matter, as Ulic and Exar could easily kill her, so attempting to prove herself of some value might salvage the situation.

Jedi Master Thon is just too perfect, not only can he easily defeat the Hssiss attack and subdue Oss Wilum, but also he is the one who realises that the attack on Kemplex is a feint. so stops the majority of the Jedi from being wiped out by the Naga Sadow weapon. While I have no problem with Jedi Masters being powerful beings who are wise and knowledgeable, Thon is just too much, as we see not only as other Masters fall before their students, but no other Master on Ossus senses what he senses, couldn't the writers have shared out the wisdom somewhat, especially as Odd Bnar, the head librarian of Ossus, is present, and features heavily in the next issue. A character literally designed to display wisdom and be protective of Ossus.

So what do you really think ? : After the action packed ride of last issue, this time we move back to moving the storyline forward, as Kun's plans to destroy the Jedi Order come to fruitition, and he puts into action a plan to plunder their most sacred site. Every moves smoothly along, and while Exar Kun and Ulic Quel-Droma do little this issue, their hands are behind all of the events, and it's good to see them manipulating events rather than being directly involved all the time.

Final Words : With the world of Ossus now in imminent danger of destruction, a place the Jedi train and keep their most important records and artifacts, and many of their Masters struck down, the Jedi Order looks somewhat defeated. Even if Ulic and Exar are beaten, the Jedi will need to pick up and start again at a new home, and with new teachers and Masters. The series really lays out a cataclysm for the Jedi order of an Order 66 level disaster, with so much experience and knowledge lost.