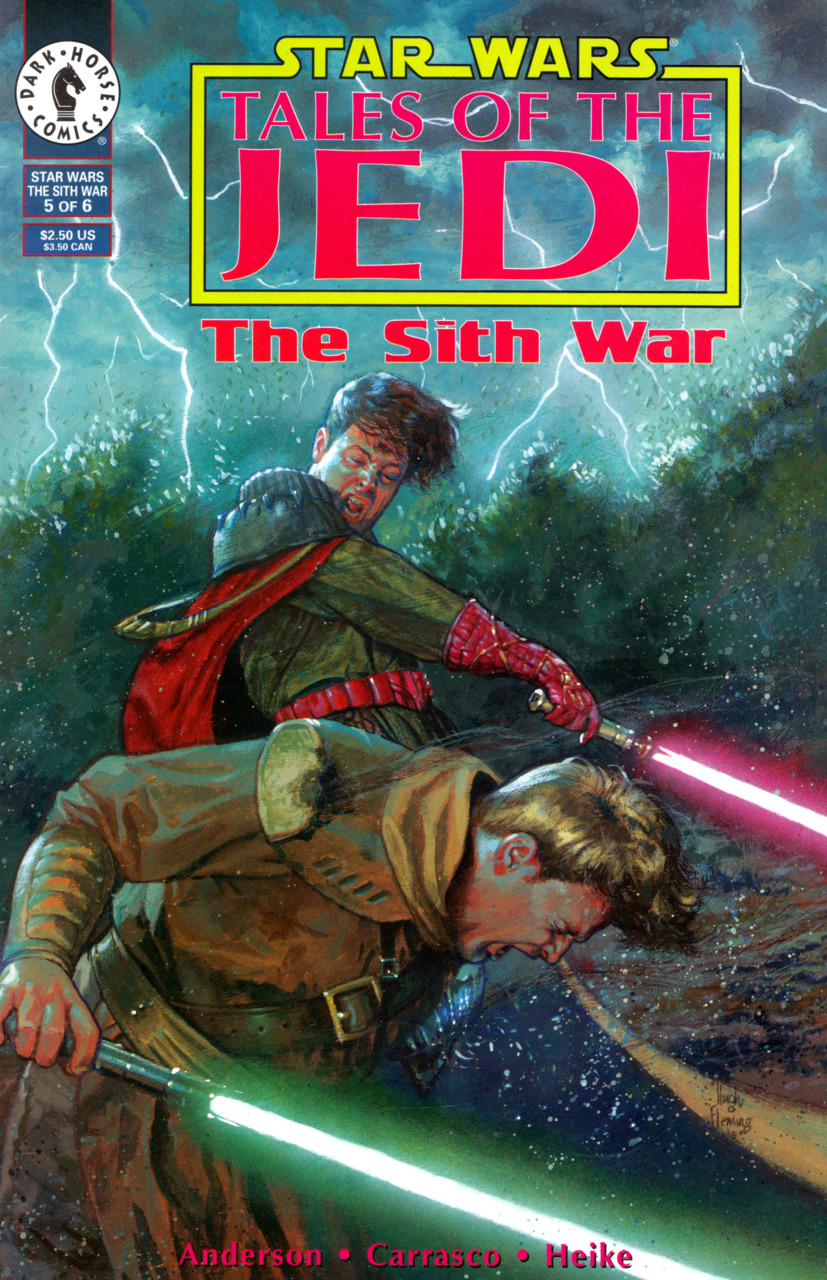 The Sith War 5: Brother Against Brother

What is it ? : On the planet of Ossus, Jedi are rushing to evacuate as the shockwave from the explosion at the Cron Cluster approaches. Jedi are working as fast as they can to save as much of their artefacts and the knowledge stored on the world, but Ulic Quel-Droma and Exar Kun are also approaching to loot the planet before the end, their forces are meagre however bringing only a couple of Space Transports rather than any of the military might they control, sending it instead under the command of Mandalore to the Royal Palace on Onderon.
On the planets surface, Cay Quel-Droma spots Ulic's vessel fly overhead, and senses Ulic's presence, taking the Nebulon Ranger to chase his brother, annoyed by his brothers continued interference, Ulic shoots one of the Nebulon Rangers engines, causing it to crash.
Jedi Master Ood Bnar is collecting some ancient Lightsabers to save them, when Exar Kun and his Massassi warriors enter the room, and the two engage in short fight in which Kun displays far greater skill than the ancient Jedi Warrior, who instead gathers the Lightsabers together and sets down his roots, transforming his mobile form into a great tree in the manner of his species. Exar Kun realises that this means that Bnar therefore can never leave this site and will be consumed by the oncoming inferno. As he leaves he is attacked by Sylvar, but brushes her aside, departing the planet with his cargo hold full of looted Jedi artefacts and knowledge.
Tott Doneeta and Nomi Sunrider are with Jedi Master Thon when they spot Cay's stricken ship overhead, and rush to help their ally as his ship plummets to the ground.
Cay tears himself free of the crashed Nebulon Ranger and spots his brother, seeing that Ulic is bleeding Cay offers help, but Ulic tells him it is an old wound, a Sith wound, and ignites his lightsaber, the two then clash. Ulic severs Cay's cybernetic arm, as Cay pleads with Ulic to give up his anger over Master Arca's death, which drove him down the path to seek revenge and to the Dark Side. Cay kneels before his brother, telling him he just loves him, while Ulic tells him he should have just left him alone before striking down and killing his brother.
Suddenly Ulic realises what he's done, and is consumed by grief, weeping over his fallen brother, as Tott and Nomi arrive. Nomi is outraged by what Ulic has done, and calls upon a Wall of Lightside energy to cut Ulic off from the force, her anger making this permanent and complete, and Ulic is a broken man, cut off from the force, and weeping over the body of his brother he just murdered as Nomi is horrified by what she just did . . . .

High Points : Although this issue is set over an extremely short period of time, perhaps only half an hour or so, there is just so much going on within, the encounter between Odd Bnar and Exar Kun is absolutely brilliant, and I adore Exar's fairly racist comments against the Plant based Jedi Master, comments about chopping wood. And although Exar isn't successful in looting the Lightsabers that Bnar is protecting, the fact that the only way this Jedi Master can stop Exar Kun is by laying down his life shows the weakness of his abilities before a Sith Lord.

But the heart of the episode is the fight between the two brother, Cay and Ulic, and Cay's sacrifice as he lays down his life for his love for his brother, and how even though he dies, this breaks the hold the Dark Side has over Ulic. Although Nomi severs Ulics connection to the Force, it's unclear as to whether this was at all necessary, as he was already defeated in his heart. It's entirely possible that the Sith Poisons would have taken hold once more after the moment had passed and turn Ulics regret into anger once more, but the tragedy here is how Nomi strikes out in anger to defeat him.
Ulic is beaten by anger he causes, even though his brothers sacrifice has possibly freed him anyway. A brilliantly written moment, which allows room for discussion and interpretation, something much of Star Wars can only dream of.

Low Points : I would liked to have seen more of the chaos and panic as Ossus is evacuated, as the families of the Jedi are here as well, and the oncoming firestorm from the destroyed stars should be such a threat that it should shape the entire issue. However, even though we're aware that there's a countdown going on, we don't really have the feeling that anyone who is left behind will be killed except for the transformed Jedi Odd Bnar. I just feel that everything just seems a little orderly for such a wave of oncoming disaster.

Speaking of Odd Bnar, while I like the fact that he is a plant based lifeform, who has a mobile phase where he is the equivalent of any other intelligent human or alien, before he puts down roots and becomes a tree. This kind of makes sense, with the mobile form having evolved to find fertile new ground for the future. However, his transformation into a tree, while dramatic, doesn't really make any sense. Roots take a long time to grow, trees are ancient slow things, so the fact that he's more like a transformer, just suddenly switching to tree mode just feels unrealistic and a bit silly. I suppose it's possible as a Jedi he uses the force to speed this transformation at such an important time, but it just feels like he flicks a switch and just becomes a big tree.

So what do you really think ? : Definitely one of the best issues of Tales of the Jedi, the tragedy of Ulic and Cay is emotional and sudden. After so many times Ulic has brushed off his brothers feelings and love for him, Cay's sacrifice is complete, and is completely devastating to Ulic who just emotionally breaks, and then has his connection to the Force stripped from him, leaving him powerless and full of self loathing and regret.

Final Words : So, we've just got the final issue of The Sith War to go, one of the Dark Lords has already fallen, but Exar Kun himself seems at the height of his power. All his plans have been successful and he's won every battle he's entered, the Republic is broken, it's leaders humiliated, the Jedi order beheaded and stripped of it's most sacred site, and the much of the Republic fleet destroyed in an inferno, so it remains to see how the end for this Dark Lord of the Sith will come.