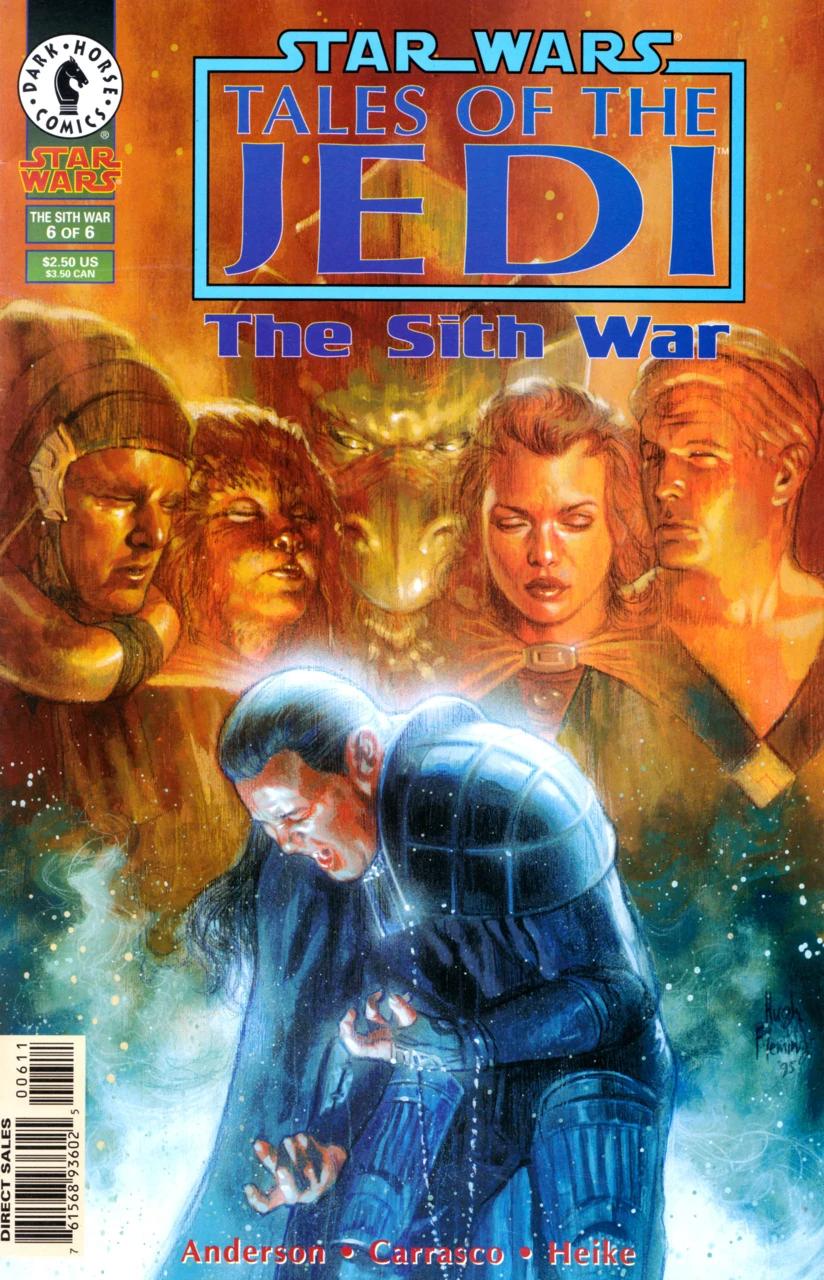 What is it ? : Above the planet of Onderon, Mandalore leads his forces on the attack, their Basilisk War Droids drop towards the walled city of Iziz, but Iziz is used to attacks from the sky, the beasts that flood over regularly from the moon Dxun. So they are prepared, and well trained, so although the Mandalorians are well equipped technologically, the Beast Riders are superior in training, and their War Beasts are the match of anything the Mandalorians have.
Nomi Sunrider is horrified by her act of anger in stripping the Force from Ulic Quel-Droma, who himself is a broken man. But Oss Wilum, himself only recently freed from the thrall of the Dark Side, calls on him to help stop Exar Kun, and Ulic agrees to lead their forces to Yavin IV.
Jedi Master Thon visits Master Ood Bnar, now transformed into his tree form, so must remain on Ossus even though the fiery maelstrom is due to arrive, they say goodbye, and Bnar says he has no regrets, for in his own way he defeated Exar Kun by keeping the treasures he now protects from the Sith Lord.
The Jedi depart Ossus, as the firestorm approaches, and the building that Odd Bnar is within offers no protection as it is burned away, and Bnar himself is reduced to just a charred stump.
On Onderon, Republic forces respond to the attack, and the Mandalorians are trapped between the Republic fleet in orbit and the Beast Riders and armed city below. So they flee to the Moon Dxun to hide in it's forests, but as they arrive, Mandalore himself is attacked by two of the Beasts that live there and is killed.
A massive Jedi Armada arrives over Yavin IV, Nomi Sunrider aided by the other Jedi begins to form a Wall of Light around the planet to destroy the darkness there, while Ulic calls on Exar to surrender, and Master Thon tells Kun that his dream of a new Golden Age of the Sith is over, and one they must all awaken from.
Exar is unwilling to surrender, and seeks a way of surviving in the Jedi Scrolls he captured, and summons the Massassi to drain their lifeforce in a ritual to free his spirit from his body. As the Massassi are drained, and the energies are released, this clashes with the Wall of Light, and a massive firestorm engulfs the whole of the Jungle of Yavin IV, scorching the entire surface. Seeing nothing could have survived the fires below, the Jedi believe Kun to be dead and retreat.

Epilogue
On the Moon of Dxun Mandalorians search for their fallen leader, and find his mask, taking it up as the new Mandalore.
Two years later, Ulic Quel-Droma returns to Yavin IV, seeking some method of restoring his connection to the Force, but cannot find anything, however in a dark space, the spirit of Exar Kun senses Ulic and calls out to him through the Force, unaware that the Jedi is unable to sense him, leaving Kun trapped in darkness . . . .

High Points : I want to sing the praises of this issue, but I have to admit I'm struggling a bit. The defeat of Exar Kun makes a lot of sense, he tries to find a way out of his problems using captured knowledge, an established character trait, as this has been his path to the Dark Side all along. But this finally misfires on him, either through the interference of Nomi Sunrider and the Jedi armada's Wall of Light, or through just a miscalculation or misunderstanding of the power, leaving him eternal, but trapped in darkness unable to effect the galaxy.
But this isn't a satisfying ending to the story, and is pretty much the equivalent of the bad guy tripping up and breaking his neck at the end of the story. While it makes sense for Exar to be defeated by Exar, as his search for new knowledge and power and overconfidence was always his greatest weakness, it does leave the Jedi as pretty weak, ineffectual and powerless.
So I'm torn.

Low Points : Well Ulic is definitely disturbed by being severed from the Force, as he mentions that he lost Master Thon, when Thon is stood only feet away. I'm guessing the writer made a mistake and meant that he'd lost Master Arca!

And I've two questions which are connected!
Where'd all the Jedi come from?
Where'd the Krath go?
At the end of the story an Armada of Jedi fall upon Yavin IV, where Exar seemingly has only his Massassi and no Starships to defend himself or flee. Given just last issue that the Jedi stood defeated, where did all these ships come from? Where did Kun's Krath allies go? Because they were too big of a threat just by themselves for the combined forces of the Jedi and Republic to defeat, and the forces under Ulic had been forced to retreat earlier in the story! The Jedi had a massive meeting about the threat of the Krath and could come up with no solution?
So did they just forget about the massive Armada they had sitting around doing nothing? The Krath don't even bother turning up to the final fight at all, I guess with Ulic and Exar distracted, and Aleema and Satal both dead, they had an election or something and just became part of the Republic again.
We were shown that the Krath were more than a match for the Republic and Jedi together, and that the Mandalorians were a challenge for the Krath. So together they should have been near unbeatable. But now here we are, with most of the Republic fleet supposedly destroyed at the Cron Supernova, and the Mandalorians get defeated by the Republic fleet and forces of Onderon.
I know it's the final part, but it would have been nice for the good guys to have won, rather than having just discovered an armada lying around doing nothing.

And finally, Ulic turns up at the end seeking a way of restoring his connection to the Force, seemingly a free man, even though he led armies against the Republic and Coruscant itself. Even though he murdered his own brother? The Jedi obviously decided without the Force he's no threat, so let him go, but I find it difficult to believe the Republic was fine with this, as he was under trial in the Senate itself at one point when Exar Kun broke him out.
I'm aware that the final Tales of the Jedi story, Redemption goes into Ulic's further story, but I would definitely have liked at least a brief explanation of why he's free and wandering around. He could easily have been found innocent because he was acting under the effects of Aleema's poisons, but we're told nothing.

So what do you really think ? : A bit of a disappointing ending for such a fantastic saga, and although we've got some threads to be wrapped up in Redemption, this is kind of the end of the events started off back in The Beast Wars of Onderon and The Freedon Nadd Uprising.
The story just kind of ends, with the Mandalorians defeated, even though just a few issues ago they were far more powerful than the Republic, the Krath just forgotten about, and Exar Kun unable to do anything about the Jedi Armada which is summoned up out of nowhere.

Final Words : The Jedi Armada would have made an interesting plot point if it had always been known about, that the Jedi were taking time to assemble from across the Galaxy, so Exar and Ulic's actions were always under the clock before this fleet was formed and could then attack.
With this, we'd have known that Exar's actions were a gamble to take the Republic and gain enough power to defeat this armada before it was completely ready, and that at the end here that his gamble had failed. But instead we get an unsatisfying conclusion where the Jedi had always had enough power to defeat Exar, but just never bothered to use it before.
It's a great read, but a terrible ending to the ongoing story.