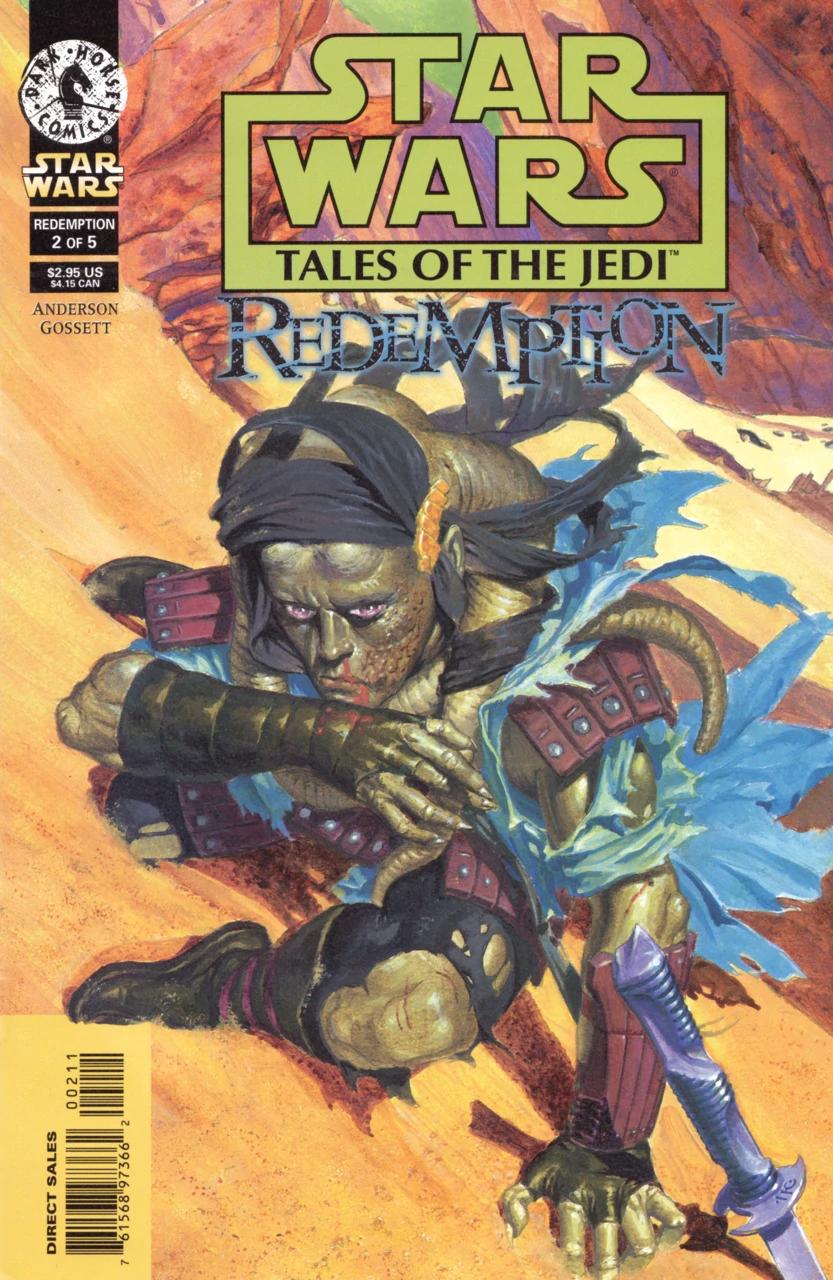 Redemption 2: The Search for Peace

What is it ? : After leaving Ulic Quel-Droma on Rhen Var, Hoggon arrives at Exis Station, and bribes the Dock Master for information on where to best watch the Jedi Convocation. He squirms into an air duct above the chamber where the Jedi are speaking, just in time to see Sylvar speak on the subject of Ulic, saying that he was once the greatest Jedi, but not is their greatest shame, walking free despite his crimes.
On Rhen Var, Ulic takes up his lightsaber, but without the Force, he feels no connection with the weapon and it is just a tool in his hands. And as he despairs, the ground collapses underneath him and he drops into a chasm.
Back on Exis Station, Vima is looking at two holograms that her mother has kept since she was a child, one is of her father, Andur, and the other is of Ulic. She asks her mother if she can begin her training, but Nomi is too busy. So the young girl leaves to find someone who will train her, telling herself that a Jedi is resourceful, and she boards a ship hoping to find some, perhaps Ulic himself to train her. Also in the docking bay, Tott Doneeta invites Sylvar to his homeworld of Ryloth which he will be helpful in helping her deal with her anger, and she agrees.
The pair travel to Ryloth, and arrive in Tott's clans new city constructed inside a giant cavern, only to discover that the clan has been attacked by another clan, and Tott departs to deal with the problem, asking Sylvar to help out the clan. They ask her to help with repairs, but she is a warrior, and begins giving a rousing speech to convince the Twi'leks to attack their rivals, to dissuade any further attacks.
But Tott returns, and tells everyone that the situation has been dealt with, the two leaders of the clan will depart into the desert to die in the heat storms, and a new joint leader will be chosen and the clans merged together. Tott tells Sylvar that she turns to violence too easily, and she asks to return to her homeworld of Cathar, complaining that things are just too different here.
On Rhen Var, a wounded Ulic looks back on his life and the mistakes he has made, including betraying Nomi and murdering his own brother, and prepares to give in to his situation and die. However a vision of Arca Jeth, his old Jedi Master appears to him urging him to live, and Ulic pulls himself from the hole through the snow.
Back on Exis Station, Nomi notices her hologram of Ulic is missing, just as Master Thon informs her that her daughter is missing.
On board Hoggon's ship, he hears a noise and discovers Vima hiding, who tells him she is searching for Ulic Quel-Droma, and Hoggon replies that it's just her and the rest of the galaxy. But Vima tells him the Force has guided her to him, and shows him the Hologram, which Hoggon recognises, taking her to Rhen Var he gives her survival supplies and a communicator, telling her that he'll be in range for several days, and she tells him that she will not leave until she's a Jedi. . . .

High Points : This issue is really just putting the pieces in place for the rest of the story, Ulic is searching for a reason to live, Vima is searching for Ulic and a teacher, and Sylvar is on the path to the Dark Side through anger, and Tott is trying to save his friend from taking that path.

While Sylvar and Tott's story is interesting, I didn't find it compelling, however, this is proving to be Vima's tale. Rejected by her mother, she is searching for a path which will allow her to be as much of a hero as she sees everyone tells her that her mother is.

I'm also quite impressed by the natural way that Vima taking the hologram, leads to Hoggon discovering his passenger was Ulic Quel-Droma. It flows nicely through the story, leading us through events towards the realisation for Hoggon that he knows where Ulic is, something everyone in the galaxy wants to know, putting Hoggon at the centre of historic events, somewhere he very much wants to be.


Low Points : Nomi is being a terrible mother, but this comes as no surprise, for much of The Sith War she abandoned her daughter to go to war. This just makes me think that the Jedi normally have some kind of way of caring for the children of Jedi, and I'm most surprised by Thon, who looks to be in the perfect place to care for and train the girl.

It also seems that the Jedi have learnt nothing from Ulic and Exar's fall to the Dark Side, and even though Sylvar is going around angry and vengeful, leading the Twi'leks towards warfare and very obviously on the path to the Dark Side. And Nomi and Thon do nothing, leaving it to Tott Doneeta, as Sylvars friend to try to help lead her back to the light.

I also failed to mention in the last review that they've changed the Tales of the Jedi logo, which was before in the style of the Empire Strikes Back logo, with the name surrounded by the Star Wars border. But they've now updated it to one with one dominated by the Star Wars, and the Tales of the Jedi title moved down to a subtitle beneath. I don't like this at all, and really liked the old version. While the older logo made sense in the design scheme of the Star Wars movies, matching as I mentioned above the Empire Strikes Back logo. The new version doesn't have the design elements of any other logo except of course for the iconic Star Wars element itself.

So what do you really think ? : It's a quick read, and flows well through setting events in motion, with all of the characters being put in positions where they will end up in conflict, with Vima and Ulic on one side, and Sylvar and Hoggon on the other, with Nomi stuck between the calls for vengeance on Ulic, and her daughters wishes.

Final Words : The story feels set in stone already, and I'm fighting mentioning above what seems so obviously is going to happen as I talk about what is happening. The line of dominoes has already been set in motion, with each leading to the next, but I'll be interested to see if we get any surprises along the way.