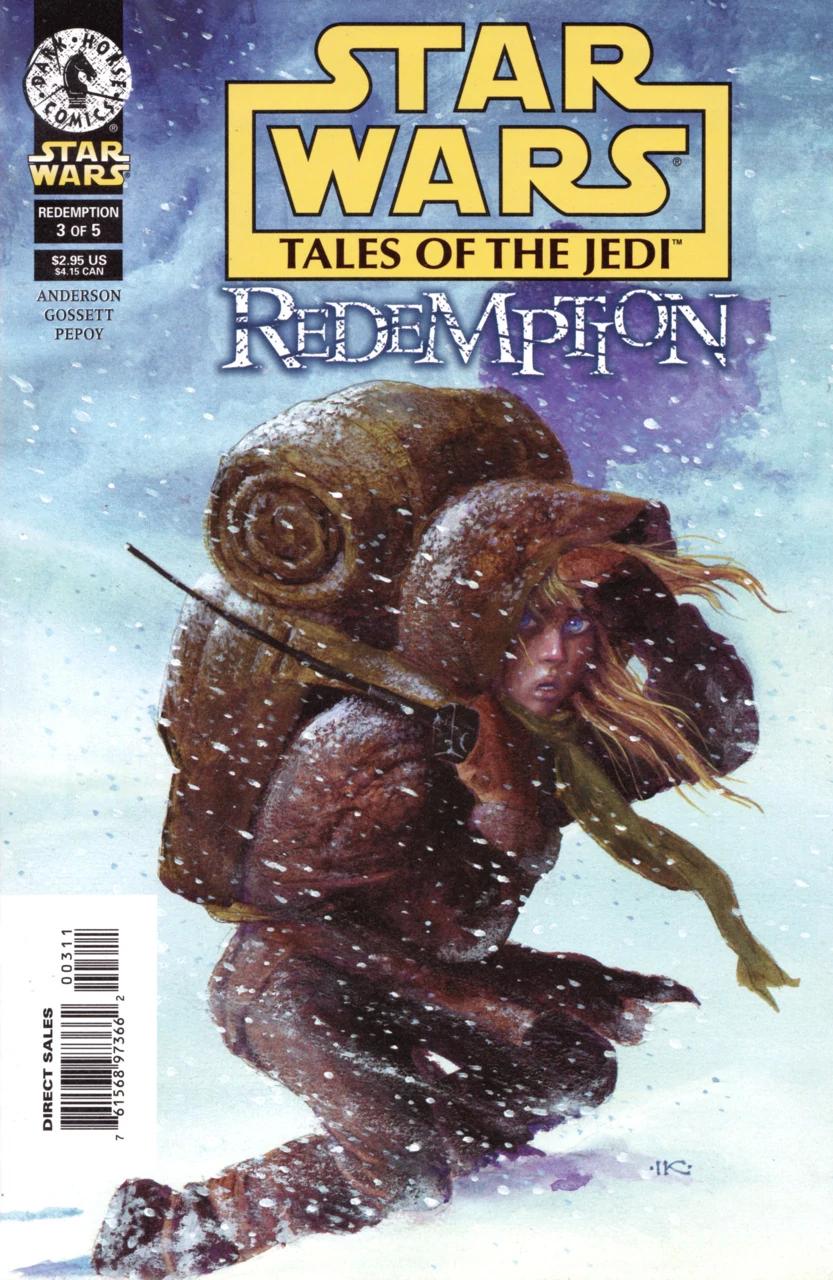 What is it ? : Vima Sunrider has arrived on Rhen Var seeking Ulic Quel-Droma as her teacher, she searches through the frozen city she has been left in, and spots his shadow in the distance, racing after him.
Confronting him, he momentarily thinks he's being haunted by his memories of Nomi, as Vima resembles her mother, but as they speak and she asks him to be her teacher, he scolds her over selecting someone who has done the things he has done, and can't even feel the Force any longer. Sending her away and telling her to go home, Vima returns to the frozen surface attempting to call Hoggon back, but her transmitter doesn't work, and she is caught in a blizzard. Ulic returns and guides the two of them into a wrecked tunnel, warning her they may have to shelter here for some time, as the storms can last weeks.
Tott Doneeta has escorted his friend, Sylvar to her homeworld of Cathar, where she is hailed as a hero. A massive monument has been raised to her memory, and crowds cheer her in the streets, but everything just reminds her of her loss, seeing families cheering her, reminds her that Cathar mate for life, and her mate Crado was taken from her in the Sith War, and she will never have a family. She came to seek solitude, but has found the exact opposite, so invites Tott on a bloodhunt, a ritual of her people to cleanse themselves of their anger, which the Twi'lek readily agrees to.
Back on Rhen Var, Ulic and Vima talk, and she shares that her mother isn't training her, and he shares the loss he has experienced as a Jedi, the loss of his Master, the betrayal of Nomi and the murder of his brother, questioning the girl why she has chosen him to train her. To which she simply replies, because you're Ulic.
In space, Hoggon is repairing his ship, and realises that Ulic is a wanted War Criminal, and decides to give the information to the Jedi, either Nomi or Thon, hoping that a legion of Jedi will be sent to deal with the fallen Jedi.
On Cathar, Sylvar leads Tott to lands devastated by the Kitlik, an insect species, which although only active at night, ravage the lands killing everything. Sylvar tells Tott that killing the Kitlik's is a mercy to the planet and will help her purge her anger, and the two head down into the Kitlik tunnels.
Entering the Queen Kitlik's chamber, the two Jedi begins fighting the insects as they rouse in defence of their hive, but Sylvar takes it further, falling upon the defenceless Kitlik Queen and offspring, slaughtering everything in the chamber. Tott is horrified by this, and tells Sylvar that she has not purged her hatred, she has given in to it, and that she knows where that leads, and to remember Ulic.
At Exis Station, Hoggon arrives and tries to contact Nomi, but she receives a message from Vima, telling her she has sought out Ulic as her teacher, and she asks an attendant to send Hoggon away as she despairs over Vima's recklessness.

High Points : Although the scenes with Tott and Sylvar on the blood hunt are wonderful, and show how close that the Cathar Jedi is coming to falling to the Dark Side, my favourite scene in the issue is definitely the one between Ulic and Vima as they shelter from the storm.
With nothing but time, the two talk, and share their experiences, Vima sharing her frustrations about being in her mothers (and to a certain degree Ulic's) shadow, and her lack of training and progress. And Ulic's despair at the loss of Arca Jeth, his brother Cay and his relationship with Nomi. They discover that they're both kindred spirits, and can help each other.
It's a very different relationship than most Jedi apprentices and masters, as they've got something to offer each other, Ulic has the knowledge, and Vima has the hope and wonder of the galaxy which Ulic has lost.

Low Points : Hoggon's dismissal is so stupid at the end of the issue, although we're supposed to feel that Nomi's feeling over her daughter is losing her a way of finding her daughter, but in reality, all Hoggon has to say is that it's about Vima, which would almost definitely get him the meeting he seeks.
But nope, for story reasons, he gets sent away.

So what do you really think ? : While there's no huge Jedi action in this issue, it's a nice story with some heart, as rather than just being angry and not realising it, we've got Tott and Sylvar working on a solution for Sylvar's rage. But she is controlled by it, and cannot find a way of getting past her loss and the blame she is attributing for that loss.
And this makes Sylvar a far more interesting character, rather than just someone who is righteous and angry, she's a victim, lashing out in frustration, and very much in danger of falling to the Dark Side, but unable to do anything about it.

Final Words : Both storylines, of Sylvar and Tott and of Vima and Ulic are great here, filled with sadness, and all the more readable and moving for it.
Where Sith War dealt with the physical events from Ulic and Exar's rise, the defeat of their armies, etc. Redemption is dealing with the emotional fallout, and as shown in the first couple of issues, with even the Jedi order itself wondering if Ulic Quel-Droma, their brightest and greatest hero could fall to the Dark Side, can't they all?
With the Jedi themselves lacking the knowledge and wisdom of their Masters lost in the war, they're in danger of giving in to their anger and despair.
And Ulic himself, with everything stripped from him, no longer a Sith, no longer a Jedi, what purpose does he have?