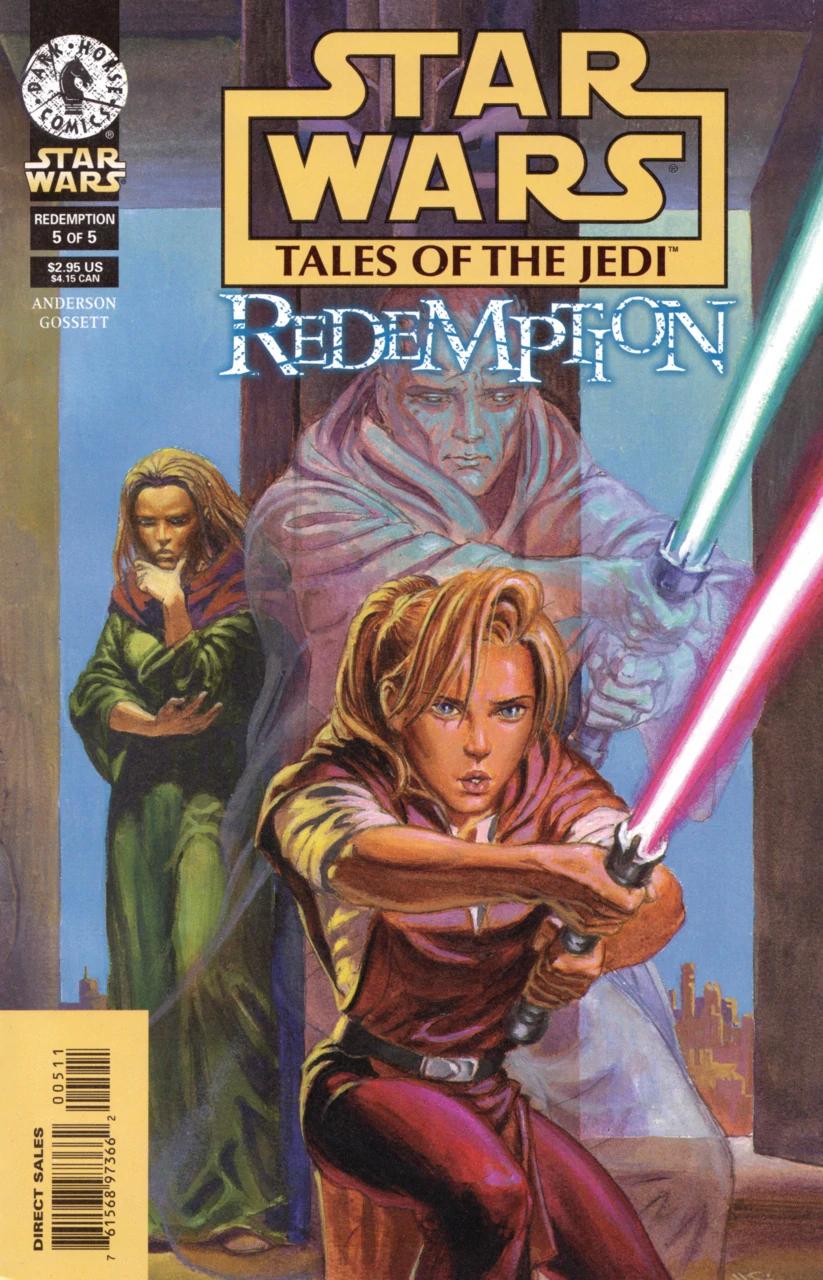 What is it ? : Vima Sunrider and Ulic Quel-Droma are in the snowy wastes of the ice age world of Rhen Var, sparring with their lightsabers. Ulic warns Vima about overconfidence, which was his largest flaw, and she takes the opportunity to show her skill by cutting a medallion from Ulic's neck, and the two begin a snowball fight. Chasing each other, they come to the edge of one of the buildings buried in the snow of the planet, with a sheer drop from the edge of it, and Ulic uses it to teach Vima a lesson about becoming cornered and the fact that Jedi must make life or death decisions and terrifying ordeals.
Vima questions him about how one becomes a Jedi Master, and Ulic tells her that they face more ordeals, but he cannot be a master as he cannot feel the force. But she comments that although he doesn't feel it, he understands it. To which he tells her that anyone can understand if they try hard enough.
Meanwhile, Nomi Sunrider arrives on Rhen Var in her ship, to rescue her daughter from Ulic who she sees as a criminal and failure. Finding the pair, she tells Vima to come home, but Vima responds that she is staying because Ulic has made her a Jedi.
Elsewhere on the planet, Sylvar and Hoggon arrive on Rhen Var, and Hoggon offers his aid and his blaster to deal with the notorious war criminal Ulic, but Sylvar tells him she has no need of his weapon.
Vima tells her mother that Ulic has taught her about the Force, and he is not the monster that Nomi taught her that he was. And Ulic says that he never asked Vima to come to him, but he has done what he can to train her, and Nomi is welcome to take her daughter and complete her training.
Vima explains how Ulic saved her life, and could have left her to die in the Blizzard, asking Nomi to give Ulic a chance, and takes her to the snow sculptures of Master Arca and her father Andur that she and Ulic created, although they are already melting, the water running down the faces like tears, and Vima returns the hologram of Andur to Nomi as the two embrace.
Alone, Ulic thanks Master Arca for convincing him to live, so he had the opportunity to help Vima, who he knows will become a great Jedi. But he is interrupted by Sylvar, who intends to kill him in revenge and as punishment for what he did to the Republic, for his acts with Exan Kur, and for what he did personally to her with the death of her mate Crado.
Ulic tells her that Crado was responsible for his own actions, and that she shaped him as much as Ulic, and offers to help her overcome her own guilt as he has. But she ignites her Lightsaber and the two begin fighting. Ulic asks he why she cannot move on from the events years before, and she tells him because he has not been punished enough.
Nearby, Nomi senses the conflict and that Sylvar is here, as Sylvar backs Ulic to the edge of the precipice he and Vima stood on earlier. Ulic tells her that she is not the only one who lost someone in the Sith War, and switches off his lightsaber, refusing to fight her any more.
Sylvar swings her lightsaber at Ulic, but realises that he is right stopping the blade millimeters from killing him, to ask why it had to be him that would free her from her rage and anger.
Only for Ulics chest to be blasted open by Hoggon who has decided to become a great hero by killing the War Criminal Ulic Quel-Droma. As Vima and Nomi rush to the fallen Ulic, Sylvar tells Hoggon that if it wasn't for Ulic she would be tearing Hoggons throat out now, and he rushes off saying he never did understand Jedi.
Ulic's final words are for Vima, and he gives her his medallion that she cut off his neck earlier, before he dies and becomes one with the Force fading away. Nomi is astounded, how could he be a Jedi Master and become one with the force if he couldn't feel the Force? And she tearfully thanks Vima for helping Ulic see past his darkness. And Vima tells her mother, that while Ulic may not of been able to feel the Force, he had the heart of a Jedi, as Ulics cloak blows away on the winds of Rhen Var. . . .

High Points : Wow, what an ending, we get Ulic redeemed in his own eyes, in the eyes of Nomi and Sylvar, and apparently by the Force itself.

Okay, the thing is, I adore the redemption aspect of this story, Ulic is shown to have overcome his darkness and to be a useful member of society again, and that redemption also helps those around him, repairing the relationship between Vima and Nomi, and helping Sylvar finally accept Crado's death. However, I really don't agree with the fact that all this makes up for everything Ulic did during the Sith War. Even if you accept the worst excesses were all down to Exar Kun, Ulic did order and lead the attack on Coruscant, which must have led to many civilian deaths. He was the leader of the Krath forces which crushed resistance in the Empress Teta system, and in any normal court of law he would be at least jailed for the rest of his life, rather than being forgiven because he lost his magic powers.
But I can get past that, because for storytelling reasons it's satisfying for Ulic to have an opportunity to make up for his past crimes, and the very personal level of these makes it feel all right. Even if there's probably many thousands of orphans and widows of the Sith War who would see it very differently, and that the training of one young girl isn't in any way an equivalent act of goodness to balance the scales of the evil he once did.
But even that is somehow balanced, as he loses his life to Hoggon, who shoots Ulic dead for his War Crimes. So even though the Jedi forgive Ulic, and are appalled by Hoggon's actions, Hoggon perhaps does strike some justice for all the non Jedi who lost their lives in Ulic's Sith War activities, even if Hoggon does it for personal glory.

Low Points : On rereading this issue, my first question was when Nomi arrives on Rhen Var. How did she know Ulic and Vima were there? Hoggon never managed to tell her, instead bringing Sylvar, and Nomi left after those two. But somehow arrives first, and seems to have known where Ulic was all along, so just didn't bother to come rescue her daughter? Or perhaps she sensed the pair through the Force, although if this was the case it would have been nice for the story to have told us this. Personally I think the writers just forgot she didn't know.

So what do you really think ? : A beautiful end to the Tales of the Jedi, with the Redemption of the title describing so many of the characters in the story and not just Ulic. It's a very quiet ending to the Sith Wars, and to Ulic's story, echoed by the setting of Rhen Var, with the entire thing coming down to just 5 people, Ulic, Nomi, Vima, Sylvar and Hoggon, and even though Hoggon has seemed a buffoon throughout the story, his part is absolutely key.

After rereading all of this saga over the past couple of months, I have to say the relationship between Ulic and Nomi feels a little undeserved, as their love shapes so much of what has happened, but did come out of virtually nowhere. They only spend a few panels together, then we're told they're in love.
And strangely, Andur, Nomi's husband is often forgotten, but always a spectre over the story. Nomi remembers his death which has shaped her life, but is angry at Ulic for leaving her. And although obviously emotions can be complex, I do feel that this needed exploring more, and the relationship between Ulic and Nomi needed developing more to establish it's importance in the story.

Final Words : So, that's it for The Tales of the Jedi, as although the time period continues with the Knights of the Old Republic series, which is actually far longer than Tales of the Jedi, those comics are more based on the Video Game series of the same name.
So while I may return to those at a later date, it won't be for a while.
Next I'll cover the short series Jedi vs Sith, set 1000 years before the Battle of Yavin, and then I think I'll cover a series I've never read before but have had highly recommended, Crimson Empire.