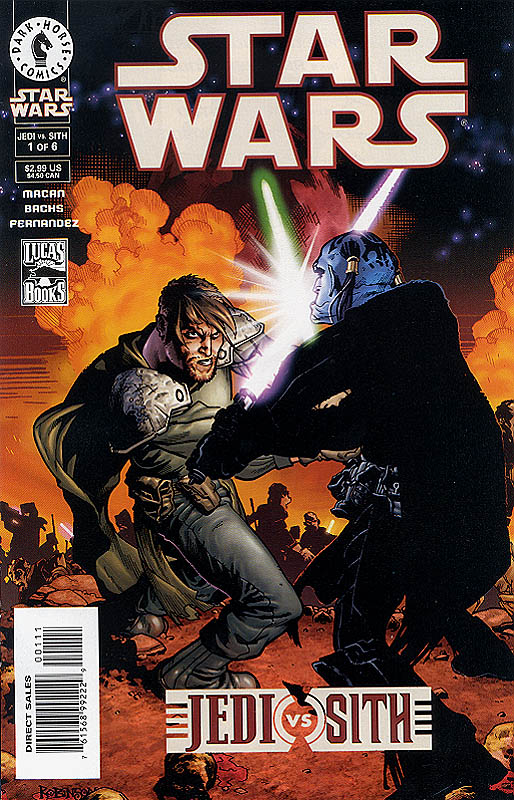 What is it ? : We begin with no version of the Star Wars Scrolling text, instead we begin with a prologue. A father and his children are scavenging a battlefield, one child finds a Mandalorian breastplate, and another finds a Lightsaber. The father tells the child to put it back, saying it's cursed, when the saber ignites and moves through the air killing the children. A Sith Warrior approaches, and the Father asks why the children had to die first, why he had to witness it, and the saber moves again, killing him, as the Sith Warrior continues silently.
The story moves to Somov Rit, three children, Tomcat, Rain and Bug are playing, Tomcat is blindfolded while Rain pelts him with fruit. and Bug is using the force to fish by compelling the fish into his nets. When they are approached by two men, one is their guardian Root, and the other a Jedi named Torr Snapit.
Snapit is recruiting for the Jedi, as a great war is occuring on Ruusan, and the Jedi need everyone, or the Sith with claim them. He is happy to take Tomcat and Bug, but he senses no potential in Rain, however gives her an opportunity to prove herself on Tomcats request, asking her to cause a flower to open, which with much effort she manages.
On Ruusan, a Jedi approaches a tent and reports to the Jedi General Lord Hoth reporting victories, but the loss of life resulting from them. The messenger, Petja happily reports that they are winning, but Hoth remarks they are losing too many and don't have the strength to drive the darkness from Ruusan. They report that Lord Farfalla is due with a hundred Jedi, but Hoth is dismissive of Farfalla, remarking if they are relying on him then they are already doomed. And they report that scouts are due in with new recruits, and Hoth is disappointed they are sending children to war, but is told if they don't recruit and use the children, then the Sith will.
Torr Snapit takes the three children to Ruusan aboard his ship, upon which they meet two other recruits, named Sladak and Slatka, who remark on the strange names of Tomcat, Bug and Rain, to which Tomcat tells them that they are use names, because on Somov Rit it is believed if someone knows your real name the Swamp Monster will come for you. Sladak and Slatka laugh, but immediate apologise, and Tomcat tells them it is a silly custom and his real name is Darovit, to which Root and Rain comment that he's bringing doom on them.
Almost immediately the ship comes under attack by Sith Fighters as they enter the atmosphere of Ruusan, and a hole is blasted in the hull through with Sladak and Slatka fall, followed shortly by Rain, as a Jedi fighter arrives to help out and Torr Snapit remarks that they are saved.
The Sith from the prologue approaches a figure sitting at a camp, who tells him that he knows who he is, but will not give him the cure. That he may kill him, but he is not afraid to die, that he may torture him, but that means nothing to him. The Sith turns and uses the force to levitate a small girl into the camp, who calls out for her Daddy, and the man gives in to the Sith.

High Points : There's a level of mystery to this story which really works, we haven't had the Sith named yet, and we really don't know much about what is going on. The Jedi and Sith are warring, and the Jedi are so weakened they're using child soldiers (as I guess they do during the Clone Wars as well).
But even without telling us who this Sith is, he's menacing, yet shown to not just be a brutal killer, knowing how to manipulate the man at the end of the issue.

Low Points : I'm never a fan of "evil" characters just slaughtering everyone for no reason, generally believing that everyone thinks they're the hero of their own story. Palpatine can be seen as someone who sees how bad the Jedi are, and that the Galaxy needs a strict authoritarian hand to bring stability and safety. However the Sith here just kills some kids in front of their father for no particular reason, other than perhaps to obtain the lightsaber.
But he could easily have just taken it, and in fact the kids and their father weren't going to keep it anyway, believing it cursed.
Given that it will be revealed that this is Darth Bane, supposedly the thinker of the Sith at this time rather than just a brutal murderer, this is a poor introduction for him, and I can't imagine Exar Kun or Naga Sadow just butchering kids for no reason.

The scene with the Jedi just feels dumped in, as the Jedi reporting to Lord Hoth just does a massive information dump to us. Many Sith have been killed, but at the loss of many Jedi lives, there's help coming from Lord Farfalla, but he's not seen as reliable, and they're using kids in the war, because if they didn't the Sith would use them instead. It's all important information, but to tell the truth Petja the messenger Jedi, just came across as "Expositional Jedi".

So what do you really think ? : It's an interesting beginning to this story, with plenty of scope for continuation, Bug and Tomcat are about to be recruited into a Jedi army, and Darth Bane is seeking a cure for some reason. The scope for what is to come is massive, and we shall see where the story leads us.

Final Words : While the artwork is fantastic, and I'm fascinated by the Tomcat / Bug storyline, Darth Bane is just kind of there and not involved much, and the Jedi scene was pretty much just exposition, so I'm being pretty generous with my mark based on the way the story is told rather than the story itself.