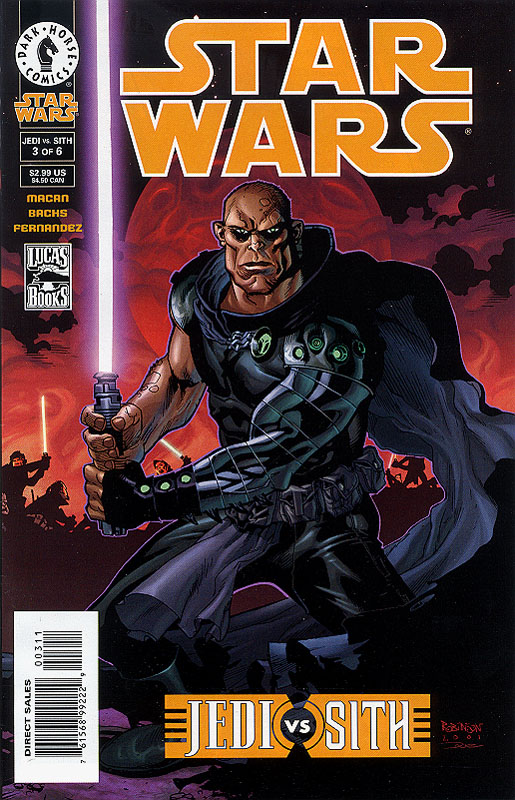 What is it ? : The leader of the Jedi forces on Ruusan, Lord Hoth and his aide, Pernicar, are discussing the reasons why they became Jedi. Pernicar was forced to when his Force Sensitivity was discovered, when all he had wanted was to become a scribe like his father, but years later he realised that there would never have been enough work for him and his brothers, so his dad had done the best for him. Lord Hoth had dreamt of saving the galaxy from the Dark Side, but the war has changed him.
The two decide that no matter why they became Jedi, they will fight like Jedi, and with that Hoth summons the Jedi to prepare for battle.
As the inhabitants of the camp rouse, covered in dirt and exhausted from the long war. Tomcat looks upon the army with disgust, saying that the Army of Light is more like the Army of Mud, and that they are nothing, just like Torr Snapit had been nothing. Bug scolds him for speaking ill of the dead, and the two are summoned to pull a food wagon as the beast of burden has died. Tomcat says that he is a Jedi and that pulling a wagon is beneath him, pulling his lightsaber to show off. But it is knocked from his hands by the chef's ladle, and he is made fun of by a group of other children, as they throw his lightsaber to each other out of his reach, until it is passed to Bug, who tells Tomcat to stop making a fool of himself, so Tomcat leaves the camp in a sulk.
Rain, Tomcat and Bug's cousin lost from the space transport that brought them to Ruusan, is still among the bouncers. some of whom are just dying. Rain asks why and they tell him that they're dying from bad dreams. Rain says he'll protect them, but his Force powers fail to have any effect, and is told by the Bouncers that he's tired and should rest and should dream.
Tomcat encounters some Jedi warriors, led by Kiel Charny, who rescued him from the wilderness. Telling Charny that he's not been assigned any work yet, Charny agrees to take him with his men to fight the Sith, encountering a warband. Tomcat gets involved in the fight, and is pleased when he uses his lightsaber and manages to kill a Sith Warrior carrying a spear. But a towering warrior attacks wearing the armour of a Sith Lord, and although terrified, Tomcat manages to kill him as well, shouting with joy that he's killed a Sith Lord.
Charny and his men don't recognise the Sith Lord, and realise that there's no Sith Lords in the force they just fought at all, wondering where they all are.
Meanwhile, a group of Sith Lords are being taught by Darth Bane, he links them together, telling them the Dark Side is indivisible and they should be part of it, asking them if they are ready to kill a world.
Rain awakens from his sleep, and the forest is dying around him, he asks Laa, the Bouncer he has become friends with what is going on, and Laa tells him that Rain had bad dreams, death dreams. . . .

High Points : And once again, the story moves along well, and Tomcat's frustration with the Jedi continues to build, and is building a fairly good tale of when Jedi training goes wrong. We've seen from Yoda and other Jedi masters how the Jedi training is unconventional, but here we see when instead of having a moment of revelation and realising that their Master is wise and right all along. Tomcat looks upon the Jedi not living up to their reputation as brave knights, and as a literal army of light. Seeing instead a group of soldiers worn down by a long war, they're tired and dirty, so he judges them not on their spirit to keep on fighting, but instead by their appearance.

Low Points : But while what I say above does lead to a fairly interesting tale, the disorganisation of the Army, using young recruits as mere beast of burden, and the taunting he receives, does mean that I feel his dissatisfaction is deserved.
The high standards of the Jedi have been left far behind, and they are not much more than just a rabble army, and I'm not surprised that that they'd end up with some of the recruits falling towards the Dark Side with resentment of their treatment and anger against their fellows.

So what do you really think ? : While there's an interesting story trying to be told here, I do find that it's a bit confused, because Tomcat's actions while a little extreme are pretty justified. Taken from his homeworld with the promises of joining the Jedi Army, he finds himself in a muddy field, being asked to do the work of an animal.
I'd be pretty angry as well, and he's not been assigned to any Jedi Master to help teach him how to resist the pull of the Dark Side. I suppose we're seeing the Jedi order at one of its lowest ebbs.

Final Words : 3 issues down, and 3 to go before the end of this little detour to 1000 bby. For my criticisms of the story, it's well told, gorgeously illustrated, and isn't boring. It just doesn't feel quite right, the Jedi are a little off, and although there's a Starship, and Charny uses a Speeder Bike, the low tech setting seems more like the Republic is on the edge of total collapse, which if it's the case, I'd like to have seen that story more than the current one.