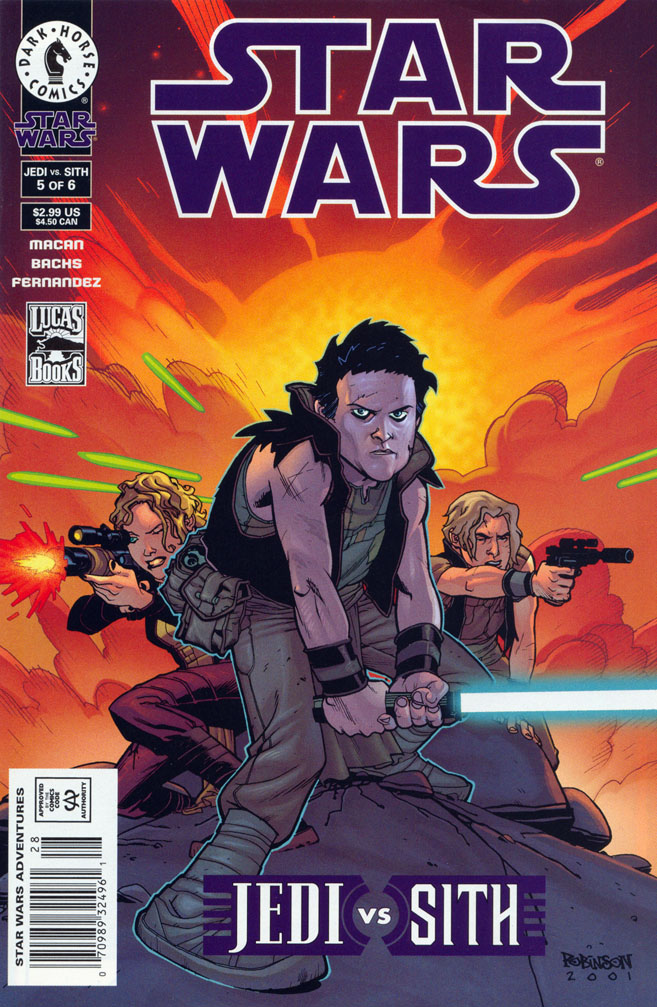 What is it ? : The Bouncers have seemingly been driven insane by the ongoing war, and one eyed Jedi Petya is clearing away any that enter the camp to stop them spreading panic through the Jedi ranks. He watches as the Army of Light prepares to assault Kaans forces in their caves, the Jedi outnumber the Sith, but only because Lord Hoth is arming everyone including children, cooks and mechanics.
Bug is in the queue to join, but they recognise him as Tomcat's cousin, and Jedi say he has the traitors bloodline, but Bug tells them he is there because Tomcat should be and that hole needed to be filled. Lord Hoth accepts that, and hands Bug a lightsaber.
Tomcat wakes, and Githany hands him a set of armour to replace his rags, and he realises it is covered by it's former occupants blood. The two enter Kaan's caves along with many other Sith, and Githany asks Kopecz what is happening. The Twi'lek explains that it's the worst news, Kaan has had an idea, to use a Thought Bomb, which means they're all dead.
Rain meanwhile has attempted to commit suicide by leaping from a cliff to kill the Dark Jedi that Laa told him he would become, but he levitates instead and tells Laa that he is stronger than a dream, so will become a good Jedi like Bug and Tomcat.
Petya is still killing Bouncers, when he fires at a target, and a winged Jedi from Farfalla's ship catches the arrow and asks him to be careful, delivering a aerial reconnaissance of the Sith positions, and an apology and offer of aid from Farfalla to Lord Hoth. Lord Hoth likewise sends his apologies, and thanks for the offer of aid.
Tomcat questions Kopecz about the Thought Bomb, and is told that it is an old Sith technique which extracts the force and turns it into an explosion which destroys all in it's path, although Kaan hopes the Sith are strong enough to resist it and it will only kill the Jedi. Githany decides to leave, hopefully to be outside the bomb's range when it goes off, but Kopecz refuses saying he made his decisions long ago, and she and Tomcat leave as Kaan with a deranged look in his eyes begins speaking to the gathered Sith.
The winged scout arrives back at Farfalla's flying ship, and brings Lord Hoth's apologies to Farfalla, who instantly realises that Hoth would not offer his apologies unprompted, but that the apology was heartfelt, so leads his men in a toast before leading them into battle to help Lord Hoth's forces.
Rain is riding Laa, and as they talk Laa explains that it has been thinking about friends now gone, and Rain asks that Laa never die, as he senses Jedi nearby. But as they approach the Jedi camp, Petya spots the bouncer, and fires an arrow killing Laa instantly. Rain is outraged by the death of this peaceful creature that he had become so close to, and grabs Petya with the force, and the Jedi dies as multiple bones break under the pressure. As Rain weeps over the fallen creature, another Jedi rushes to help Petya, but Rain reaches out through the force snapping his neck and killing him outright. Rain turns towards the mist that surrounds them, and Darth Bane emerges a dark smile on his face.
Bug and a group of other Jedi have been sent to guard the back door into the Sith caves to avoid anyone exiting that way, and encounter Tomcat and Githany as they attempt to leave. Bug uses his Jedi Mind Trick on bats living within the caves to attack and distract Githany and as she struggles against the numerous creatures, Bug and Tomcat ignite their lightsabers and face off against each other. . . . .

High Points : While I don't feel that Tomcat's role in the story made sense, Bug's does instantly. Tomcat had always believed in the stories of the Jedi and wanted to be one, so Bug becomes one simply because Tomcat isn't there.
But the best part of the story is Rain's, he has always been such a gentle hearted character, and the death of Laa just outrages him. And the way he just crushes the bones in Petya and snaps the neck of the other Jedi is such a power move, not slowly killing them like Vader would, but just killing them because they offended him.

Low Points : The Thought Bomb plotline comes from nowhere, where the Sith refused to stay in Bane's circle when he was creating the Firestorm to kill the Jedi, because they felt his teeth at their throats. Now they willingly enter Kaan's caves knowing he is going to set off the Thought Bomb which will kill them all.
So why are they suddenly willing to sacrifice their lives?
And Kaan always appeared to be the more brutal Sith Warrior, not one for using ancient powers and techniques, but for just charging in with his army and slaughtering opponents. But now he's sitting in a cave leading a ritual. This feels like it's something that Bane should have tricked him into doing, as ancient knowledge and rituals seems far more like a Bane thing from what we've seen, and manipulating the Sith into performing a ritual which will kill them all, definitely seems in line with his plans that there should only be one or two Sith.

So what do you really think ? : I continue to have to complement the way the story moves along and flows together, as although I'm not as impressed by this story as much as most of the Tales of the Jedi stories I've covered recently, I do find myself wanting to read the next issue more as I'm drawn into the story and actually interested in what happens next.

Final Words : So only one more issue to go of the Jedi vs Sith series, Bug and Tomcat are facing each other as Jedi and Sith, and unexpectedly Rain looks to be Darth Bane's new apprentice, I wonder how things end for the three cousins . . . .