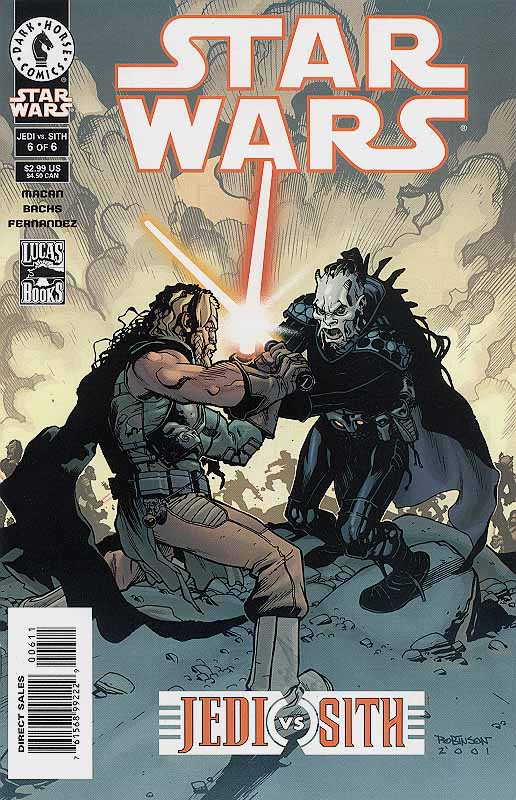 What is it ? : The Last Battle of Ruusan is raging, as the combined forces of Lord Hoth's Army of Light, and Lord Farfalla fight the Sith, and are easily defeating the army of Lord Kaan. Farfalla declares that he thinks the reason that people fight for the Sith is that they know the Jedi will accept their surrender.
However he is soon faced with the Twi'lek Sith Kopecz, who demands that Farfalla not spare him, which he agrees if the Sith will tells him of Kaan's plans.
Meanwhile Darth Bane approaches Rain introducing himself and asking her who she is, and Rain tells him that she's a killer too.
In the caves, Githany finally beats the bats that were attacking her, and urges Tomcat to finish off Bug, and Bug tells him that he is a traitor and doesn't deserve the saber that he is carrying. Githany disarms Bug, and urges Tomcat to hurry up and finish him as the Thought Bomb is due to go off, and they need to get away and find Bane, leaving the boys as she exits the rear entrance of the caves.
Lord Hoth is approaching the front entrance to Kaan's caves as Farfalla catches up with him, telling him about Kaan's Thought Bomb, and Hoth tells him he already knows as he can sense a thickness in the force like congealed blood. Farfalla stands with Hoth to enter the caves, willing to die at his side, but Hoth tells him to leave, that his life and death should not occur in caves but in the skies. Inside the caves Lord Kaan awaits on a throne, and Hoth tells him that he does not fear death, and willingly accepts it if his death is at the same time as all of the Sith.
And with a clap, Kaan activates the Thought Bomb, outside we see Jedi and Sith being drawn into the cave, we even see Farfalla sucked inside.
Bane asks Rain why he killed the Jedi, if it was for revenge or to make her feel good, but Rain replies that it was not, it was to restore balance and to make life bearable again. The pair then sense the Thought Bomb, a deep thrumming in the air, and Bane tells her that it is Kaan's smartest decision.
Tomcat stands with his lightsaber at Bug's throat, and tells him that they both hated living in the dirt on Somov Rit, and that the Jedi here were no better. Bug responds that it wasn't the way they were living, but the ideals for which they were fighting which made them better. Tomcat breaks down in tears, saying that Jedi don't die, Jedi live forever, and he wants to be like that, that he doesn't want to die. The pair become aware of the thrumming of the Thought Bomb, and Bug is painfully drained of his life force, but Tomcat is not and cannot understand as he believes he has the force as well, and should be getting drained, but a piece of rock breaks free of the ceiling crushing Bug.
Outside, Githany hears the thrumming, declaring that Tomcat had his chance, and leaps on her speeder bike to leave, however Thought Bomb drags her back into the cave as she screams.
Tomcat can't believe what he has done, and leaves the cave finding the wreckage of Githany's Speeder Bike. Outside the surviving Army of Light and Sith warriors are helping each other, all seriously wounded, as they cross the ground covered with bodies scattered everywhere, and one of the warriors explains that all of the Jedi and all of the Sith Lords were sucked into the caves and are all gone.
Tomcat charges inside to see what has happened, and discovers a large reflective egg-like orb hovering inside the cave, surrounded by Bouncers, and realises that somehow all of the Jedi and Sith have been absorbed into this object. Outside, Darth Bane and Rain arrive on Bane's Speeder Bike, ignored by the disorganised survivors, and they also enter the cave. Rain excitedly greets Tomcat, who with tears in his eyes declares how happy he is that Rain has survived. But Rain answers that she is not Rain any more, she is Zannah, her true name. Spotting Bane, Tomcat ignites his lightsaber, but Rain uses the force to explode and totally destroy Tomcat's hand.
Bane asks why, and Rain responds that there would be no joy or purpose in Tomcat's death, and Bane says she is still young. Bane examines the sphere, saying that all of the Jedi and Sith, their honour, greed and ambition all led to here, asking Rain to imagine all of the Dark Side being embodied in just one Dark Lord, and one Apprentice.
But Githany enters the chamber, saying she survived, that she was stronger than the Thought Bomb, like he was, and that she will be his apprentice and will rule along with him. But she is corpse like, her body drained and falling apart, with an eye missing, and before she can take many steps she crumbles into bones before his eyes.
He turns to Rain, saying that Githany never understood the Dark Side, does she. And Rain replies that she does not, but she is young.

Later
A one armed Tomcat is crossing the deserts which not cover Ruusan, accompanied by Bouncers, contemplating his future. He failed as a Jedi, he failed as a Sith, what can he hope to become. One of the Bouncers suggests "A Man?", and Tomcat considers it, and says "Why not!". . . .

High Points : It's a spectacularly dark ending, Darth Bane survives, Rain turns to the Dark Side, and Tomcat is left as a cripple, but everyone else introduced in the story dies. The Sith Lords, the Jedi, the Thought Bomb proves to be an amazingly effective weapon.
And it's this darkness which raises the ending above the rest of the story. And while I may not agree with the decisions made by and for the characters, it does succeed in making Rain and Tomcat extremely interesting characters. Tomcat's revelation as to why he hated the Army of Light (because they were all too mortal), and Rains calm descent into the Dark Side (to restore her own version of balance to the universe by punishing those who she decides deserve it) is different and fascinating to read.

Low Points : However, this is mainly supposed to be Darth Bane's tale, of how he instituted the Rule of Two, and seemingly he does really. There are only two left, he decides he likes it that way, so won't train any others.
Bane is no great thinker, he is no great planner or schemer, events unfold around him and he goes along with them.
Compared to the great Sith we've seen through the Tales of the Jedi series, with Exar Kun, and Naga Sadow, he's ineffective and fairly dull. There's something to be said for being a man of few words, but Bane just comes across as a bit dull.

And the Thought Bomb itself, although an interesting Macguffin, needed to tell this tale, is a bit stupid. Somehow the Sith can create a kind of Black Hole for force users, creating a shimmering sphere with them all compacted inside. How did this knowledge get passed on? Surely the first Sith to have discovered it ended up as part of a Sphere? What happens to the Spheres? Are they still somewhere around in the Star Wars Universe (My own personal answer is yes, as I did use one in a Star Wars Campaign).
And wouldn't this have made a useful ability for Palpatine to have trained an apprentice in, as they could have destroyed the entire Jedi Academy while he was off world?

So what do you really think ? : The ending is a pretty fantastic one, with Tomcat left wandering through the devastation of the Thought Bomb, it seemed reminiscent of so many bomb sites and disaster footage I think we're all too familiar with these days.
And it's pretty amazing to read, the story continuing to be well told despite its flaws.

Final Words : So that was Jedi vs Sith. I struggled to remember what I'd liked about this series as I read the first 5 issues, but the ending raises the story above the rest, with those issues really only serving as set up for these events.
Reading it to completion is definitely worth it, even if the characters don't seem to make sensible decisions, and you've just got to go along with it until this final issue.