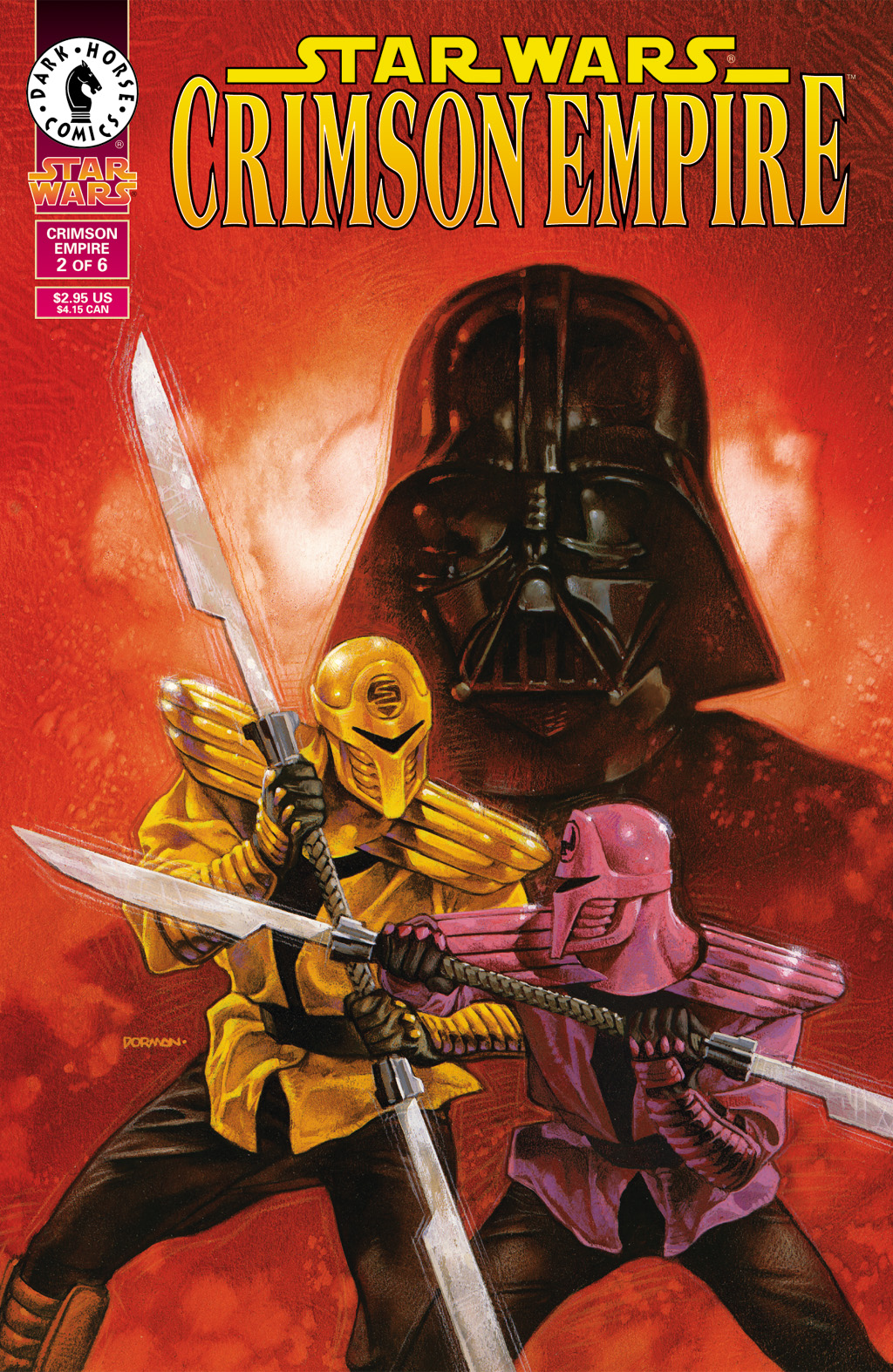 What is it ? : On Phaeda, the Robed figure is guided through the streets to a warehouse by the man who offered to help him who introduces himself as Tem Merkon. Beneath the warehouse is a safe house, which Merkon explains is rough, but when left alone the robed figure compared it to a palace in comparison to his barracks back on Yonchorr.
He remembers his time there, where he and other Imperial Guard candidates practiced combat on a platform over a deep pit, called The Squall. Two fight, Carnor Jax versus Kir Kanos, and Jax proves himself the better fighter, but as their fight ends The Emperor himself arrives, getting the two warriors to introduce themselves to him.
Darth Vader arrives for a demonstration, and asks the students who is their best and they tells him it is Burr Danid, and Vader takes a Force Pike and challenges Danid. The two fight, with Vader displaying he is by far the better warrior severing Danid's arm, and then kicking him to his death down the deep pit below the platform.
The Robed figure is awoken from his memories by the hatch to the safe house opens, and he prepares himself with his blaster.
Elsewhere on Phaeda the local commander, Colonel Shev is investigating the deaths of the officers and Stormtroopers, and he quickly realises the perpetrator isn't any normal smuggler or other criminal, and is concerned his presence will bring the attention of his superiors and destroy his career.
In the safe house, Tem Merkon arrives back with two other people, Mirith Sinn and Sish Sadeet, who are the leaders of the local New Republic forces, which are still operating like the Rebel Alliance, striking from secret bases. Although the two aren't sure of the Robed figure's intentions, Mirith is sure that they have the same enemy so can work together, and the Robed figure agrees and accompanies them back to their base.
Colonel Shev is contacted by Carnor Jax himself, and told that he and his forces are coming to Phaeda and that Shev is to do nothing as Jax will oversee any operations to capture the killer to avoid any opportunity for him to escape. However after the communication is ended, Shev is told an informant has information, and he decides the only way to salvage his career is to have the killer in custody when Jax arrives.
Shev meets with the informant who turns out to be Tem Merkon, who tells him that the killer is with the New Republic forces on Phaeda, and Shev reveals he didn't even know there were New Republic forces on Phaeda.
The Robed Figure, Mirith Sinn and Sish Sadeet arrive at the New Republic base which is being constructed inside a mountain, and the other Republic forces here are suspicious of the figure who hasn't even told them his name, so he reveals that his name is Kir Kanos and he explains he is no friend of the ruling council of the Empire and he considers them all traitors. Seeing his face, Mirith Sinn notices a large scar he has, and identifies it as a Lightsaber scar, and the two talk, with Mirith revealing she fights the Empire because they murdered her husband, when the two are interrupted, as the Republic forces have discovered that Kir Kanos is being sought by Carnor Jax himself and brings a lot of trouble along with him.
Colonel Shev's forces move on the Republic base, with Tie Interceptor support, Scout Walkers, Speeder Bikes, Juggernauts and other vehicles. To cover his betrayal, Tem Merkon seeks out Sish Sadeet in the city and warns him that because of Kir Kanos the Empire has discovered the Republic base, and the two begin heading back to the base to warn them.
Back in the base, the Republic forces are rebelling against Mirith's command because of the danger that Kanos has brought, and she give a speech about their mission to make the galaxy a better place, which reminds Kanos of another speech he heard years before.
He remembers his graduation, where they were told that they trained in pairs, living as brothers, so they could learn each others strengths and see their own weaknesses reflected in their training partner, and they are sent to The Emperor, who orders the pairs to fight to the death to earn the right to serve him. Kanos defeats his partner, Lemmet Tauk. He tells Tauk's body he is sorry, but Vader tells him he no longer has the right to be sorry, that from now on he must obey every command, every whim of the Emperor and never question them, and Vader strikes Kanos across the face with his Lightsaber, telling him he has years of service left ahead.
Kanos is brought out of his memories as Sish Sadeet arrives with the news that the Empire is about to attack, and as the cavern reverberates under the shock of an blast, the Republic forces prepare for battle. . . .


High Points : The flashback segments are excellent, seeing the training that Kir Kanos and Carnor Jax underwent, and the indoctrination they received is fascinating. And them living as brothers and then having to kill someone they've grown so close to was a nice reminder of the evil they served.

And the artwork is amazing, there are a couple of full page images, especially the one of the Imperial forces preparing to attack which are really impressive, with the vehicles detailed and accurate, it's a real joy to look at.

I must also comment on the training garb of the trainee guardsmen, while having elements of the Royal Guard armour, it is also reminiscent of Samurai armour, which given both groups obedience to their masters presents us with a subliminal message that these warriors will live and die at their masters call, sacrificing their lives under his command. A nice way of tying these characters into a real world culture and our perceptions of that culture.

Low Points : While I liked the twist that the Guardmen were trained as brothers, and then had to murder each other to win the Emperors approval, it was kind of just stuck in there. Lemmet Tauk, Kanos's "brother" wasn't mentioned by name at all in the first flashback, neither was the whole "brother" idea. It only appears on the page before they're ordered to kill each other, so seems a little last minute, and would have seemed more natural, and more shocking, if the idea had been introduced earlier so we could have become used to the closeness between those particular Guardsmen.

And while I can totally accept that the New Republic forces, while having the legitimacy of being a government, are still not really anything more than a group of various Rebels and criminal elements that the Rebel Alliance was. It does seem silly how much dissent there is in the ranks, with them almost in Rebellion against Mirith Sinn's commands.

So what do you really think ? : This issue dragged a little, whereas the first issue was packed with exposition, it moved along swiftly and was interesting. In this issue we get flashbacks, so continuing to tell the backstory, but apart from that nothing really happens. Kanos meets the Republic, and the Empire prepares to attack.
But that said, the flashback scenes really do impress.

Final Words : I've heard so much about this story over the years, and obviously formed an impression of it in my head, and it's really not living up to that impression. It's moving a lot slower than I expected, and rather than focusing on Kir Kanos acting as an arbiter of justice upon those he sees as betraying the ideals of Palpatine's Empire, we're getting the minor squabbles of a Republic cell.
But this is only the second issue and it's still worldbuilding, so perhaps things will live up to my expectations in later issues.