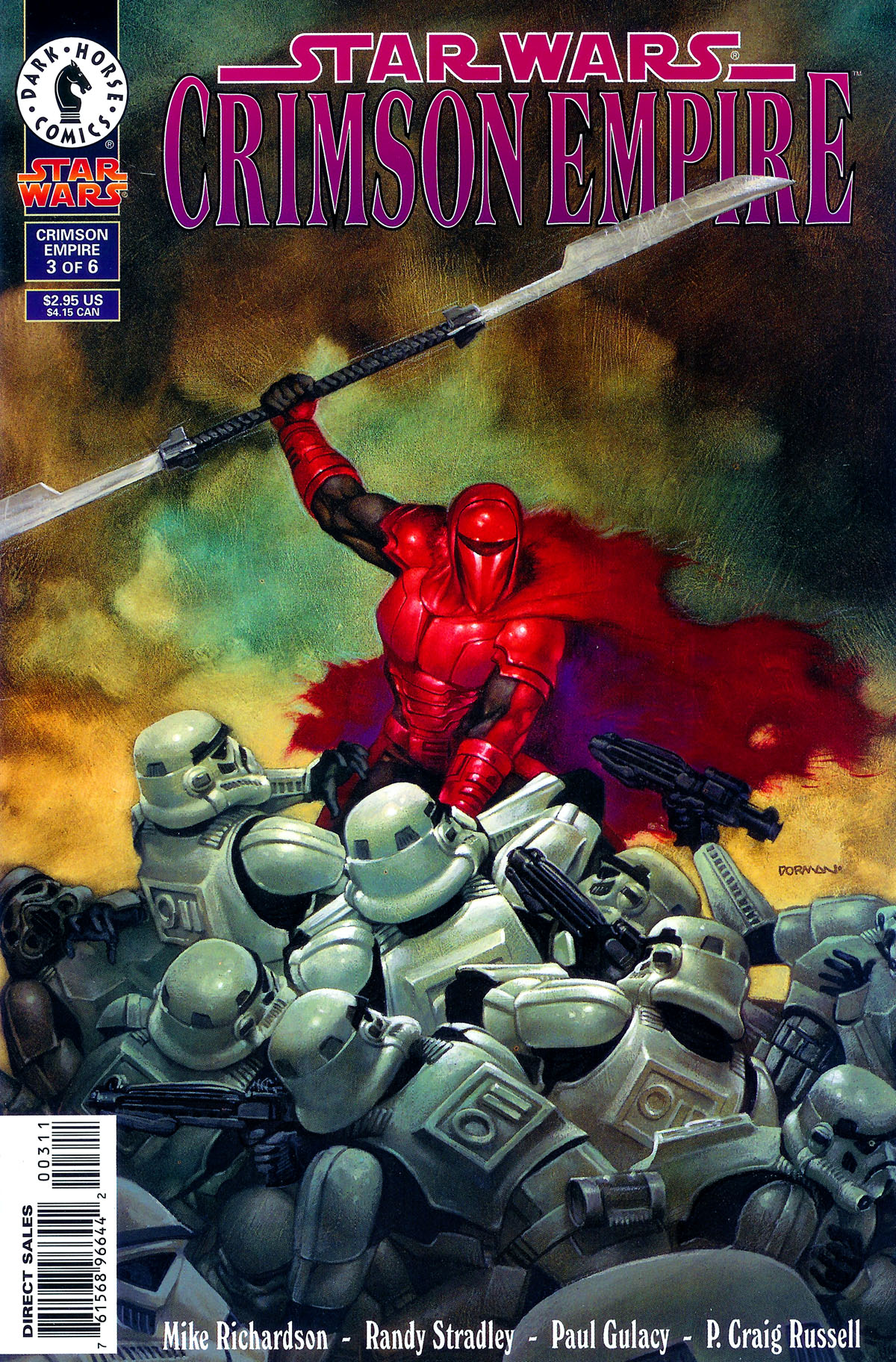 What is it ? : The New Republic base on Phaeda is under attack by the Empire, and Mirith Sinn unprepared for battle orders her forces forwards, before realising she's got them surrounded and about to be defeated. When a Royal Guardsman appears, springing into action and supporting her forces, he carves his way through the Stormtroopers turning the tide of the battle.
But Mirith Sinn and Sish Sadeet are caught out in the open by a Tie Interceptor which screams down targeting them, when the Guardsman leaps into the way, and using only a Blaster pistol he shoots through the glass canopy and kills the pilot with a single shot, causing the Interceptor to crash into the Imperial forces, causing them to rout as their commander, Colonel Shev spots the Guardsman and realises the reason that Carnor Jax is interested, and how he has failed in his orders which will be the end of his command and possibly his life.
Mirith Sinn thanks Kir Kanos as he removes his helmet, and asks why he has joined them, but he tells her that he is loyal to his mission, and tells her why.
We see a flashback as he explains that most of the Royal Guard were killed when Byss and then the Eclipse 2 were destroyed, and only 2 guardsmen accompanies Palpatine to Onderon when he was finally killed.
But one of those guardsmen returned having overheard the details of the plot against Palpatine by the Ruling council, and how the plot was led by one of their own, Carnor Jax.
So the remaining Guardsmen swore an oath to deliver death to the traitor, but their base is overrun by Stormtroopers loyal to the council, and despite their elite training, they are one by one taken down by sheer numbers until only two remain.
Kir Kanos and Kile Hannad, realising that not only could this be the death of their order, but the death of their oath taken only minutes before, the two know what must be done, and using a coin determine which will cause a distraction and which shall escape, and Kile Hannad dies a warriors death allowing Kanos to escape.
As the Resistance on Phaeda flee the remains of their base, starships carrying them off world, Mirith Sinn offers Kanos a place among them, telling him that their missions align. But he refuses, planning to return to the city and leave alone aboard his ship.
Back in the city, Colonel Shev discovers that Kanos arrived on a ship which remains in the city's starport, and sees a way of saving his life and career, ordering his forces to the starport.
While in Hyperspace, Carnor Jax is approaching Phaeda, and tells his generals that if Colonel Shev has done anything to jeopardize the capture of Kir Kanos that he will destroy the man . . . .

High Points : The write up above is shorter than the previous ones, because there's so much action in this issue, and what great action it is too. We get Kir Kanos battling the forces of the Empire, and his defeat of a Tie Interceptor with only a Blaster Pistol is astounding, and makes complete sense, as he shoots the pilot through the viewport on the front of the fighter.

Low Points : The only problem I've really got, is how easily the gathered Guardsmen are defeated by the Empire. We've just witnessed Kanos by himself turning the tide of a battle against Scout Walkers, Juggernauts and Tie Fighters. But a group of a dozen or so Guardsmen including Kanos are swarmed by mere Stormtroopers, and beaten.
So are the Guardsmen superheroic warriors who can defeat entire armies by themselves or not.

So what do you really think ? : I really enjoyed this issue, it moves along quickly and we get to see quite an epic battle, although things obviously slow down again as we get some more exposition at the end. But we're finally up to date, so hopefully the final 3 issues of this story won't be slowed down by telling us what happened in the past.

Final Words : With the exposition now all hopefully done, and Carnor Jax on his way to Phaeda, I actually find myself wondering how they're going to fill 3 more issues, as we seem to be moving towards the climax with the antagonist and protagonist meeting.
But we shall see.