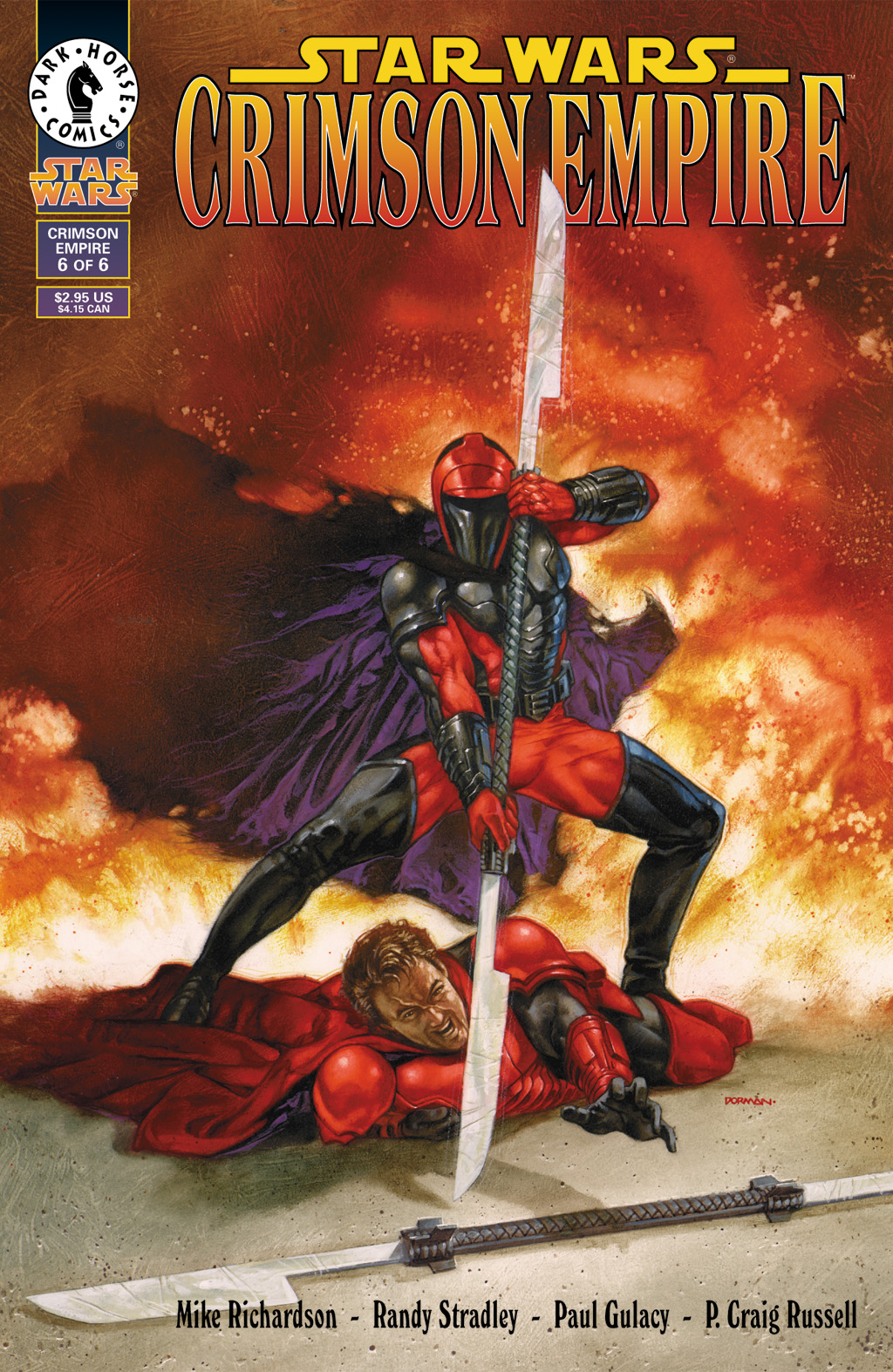 What is it ? : Kir Kanos and Carnor Jax face off at The Squall, where they once sparred and trained together, and Jax reminds Kanos that in The Squall Jax always won. Kanos claims that perhaps once that was true, but he has grown, and Jax claims that he has grown in power too, and perhaps one day with rival Palpatine, a statement which enrages the still loyal Kir Kanos.
The two fight, with Kanos showing his skill by disarming Jax, but his opponent a chance to regain his footing and his weapon, a chance he takes opportunity of by using the Force to knock Kanos to the ground cracking his helmet with a large rock.
Nearby the Pilots aboard Jax's shuttle see a vessel approaching, and aboard Kanos's Skipray Blast Boat, Mirith Sinn and Sish Sadeet open first destroying the shuttle. And from a vantage point above, Jax's aide, Blim takes up a sniping point aiming for Kanos. The Blast Boat lands, and Mirith Sinn sprints off to help Kanos at The Squall, but Sish Sadett spots the reflection from Blim's sniper scope and investigates instead.
Back at Phaeda, one of Mirith Sinn's team, Massimo, arrives aboard the Lusankya and requests a ship capable of travelling to Yinchorr, explaining that he challenged Sinn over her acceptance of Kir Kanos, but he now sees he was wrong and must help her and apologise, and Wedge Antilles offers him the use of a Sentinel Shuttle.
Back on Yinchorr, Kir Kanos and Carnor Jax continue to fight, with Jax offering Kanos a place at his side on the ruling council, but Kanos refuses to sit alongside Thieves, Opportunists, Usurpers and Murderers, saying those on the council will be the next to die. And Kanos manages to get the upper hand, jabbing his force pike deep into Jax's shoulder.
Blim takes aim at Kanos, as Jax claims to have other contingencies in place, but is blasted by Sish Sadeet, and Kanos tells him his contingencies have failed, but while Kanos is distracted Jax knocks him from the platform, leaving him dangling over the edge by his fingertips.
However, Mirith Sinn and Sish Sadeet have arrived and aiming her blaster orders Jax to help Kanos up which he refuses instead striking Sadeet with his force pike, but his second blow to dispatch Sinn is blocked by Kanos who has recovered his footing.
As the two skirmish, Sadeet takes aim at Jax, but Sinn tells him they need Jax alive as he knows Imperial plans and information vital to the Republic. Overhearing, Jax tells Kanos that he is not hampered by trying to keep his opponent alive, as Kanos and his friends are, and uses the force to yank Sadeet's blaster into his own hands. But Kanos tells him they are not his friends, and disarms Jax and moves to strike him down. Sadeet leaps into the way to stop him killing Jax, but Kanos moves swiftly and strikes down the Trandoshan, killing him and Jax.
Sobbing over the body of her friend, Sinn asks Kanos why? Why did he kill Sadeet when they'd helped him? And he tells her he'd not asked for their help, that they were only united due to a common enemy, and that he regrets Sadeet's death, and now she must live with the decisions she made which led to his death, and he leaves to deal with the other traitors.
Later Massimo arrives on Yinchorr, and finds Mirith Sinn finishing the grave of her friend, and she swears to Massimo that she will find Kanos and will be his executioner. . . .

High Points : While I really enjoyed the action and the storyline, I did find this issue heavily flawed. But the fact that the entire issue is pretty much just one scene, an extended fight between the two Royal Guardsmen with twists and turns as one or other gains the upper hand, is great.

I especially liked that they stayed loyal to their original concept of Kanos, rather than just having him become another Imperial turned Rebel. Instead throughout Kanos is staying loyal to his oath to Palpatine, and while he wants to punish those who he sees have betrayed the Empire and it's ideals, he wants nothing to do with the New Republic.
And I will state here, that if he turns and joined the Republic in a later story, I'll be massively disappointed.

Low Points : While I'm not keen on the decisions made by some of the characters in this issue, for example there was no way that Kir Kanos could just have injured Sish Sadeet? That having seen Kir Kanos in action and knowing that Carnor Jax is at least his equal, that Mirith Sinn and Sith Sadeet couldn't see that there would be no safe way of restraining and questioning Carnor Jax?
But my biggest question of the issue is how fast is Sish Sadeet?
During the action, Sish Sadeet climbs to Blim's hiding place some distance above and some distance from The Squall. However, it the moment of distraction caused by him shooting Blim, he arrives on The Squall along with Mirith Sinn!
What is he, The Flash?
The only way this scene makes sense is if Jax stands over the dangling Kanos for some time watching to see if he'll fall, an likewise, Mirith Sinn (who ran off to the Squall while Sadeet was investigation and climbing up to Blim's position) stood for a while watching!

Also, while I can understand Sinn being upset by Sadeet's death, I have to ask who she's trying to kid by saying she'll hunt down and execute Kir Kanos? She's seen him fight and pretty much defeat almost an entire Imperial Army by himself, when she was obviously going to be beaten by them. But now suddenly she think's she can track down and kill Kanos. This just appears to be to be suicide by Royal Guardsman.

The style of Kir Kanos and Carnor Jax's Royal Guardsman armour is amazing, and while I can see why they modified it from the original (it'd be pretty hard to tell what was going on in this final fight if they were both dressed head to toe in identical armour). And I can definitely see why Carnor Jax had his armour modified (to display that he wasn't just another Royal Guardsman). I have to question when did Kir Kanos have time to go out and have his armour modified?
Personally, I think it would have made more sense if Kanos was just dressed head to toe in Red, and Carnor Jax had his armour modified to all black to mirror Vader and his own Blackhole Stormtroopers who also dressed in all black.

Finally, I repeat my questioning of Jax's sudden Force Skills? It doesn't seem likely that Palpatine would want Force Users as his personal guard, and we never got any explanation of where Jax has suddenly received training!
Although perhaps all of the Royal Guard had force potential? As it is mentioned that Kir Kanos fights like only a Jedi or Royal Guardsman is known to fight, so perhaps the Royal Guards were indeed Jedi, but just not taught anything but the physical reactions and capabilities! But we'll see if future stories mention it at all.

So what do you really think ? : Well, I can see why people raved about Crimson Empire at the time, it's a good story with an interesting concept (a Palpatine Loyalist working against the Imperial Remnant as they have betrayed Palpatine and his ideals), and definitely makes Royal Guardsmen look cool and dangerous, where in the movies they were just background guards (although in a cut scene from Return of the Jedi they do appear to challenge Vader, perhaps revealing unknown skills).

Final Words : A solid and interesting story, although it leaves a lot of questions mostly about the now dead antagonist, which makes me worry we'll never know the answers. Where did Jax get his Jedi training? How did Jax rise to power in the Ruling Council? Why when the other Guardsmen were so loyal to Palpatine, did Jax turn on him?
And sadly without the answers to many of these questions, then Crimson Empire might as well not exist, as it doesn't tie in to the rest of the continuity at all (suddenly the Empire has a new leader, and then equally as suddenly he's dead)