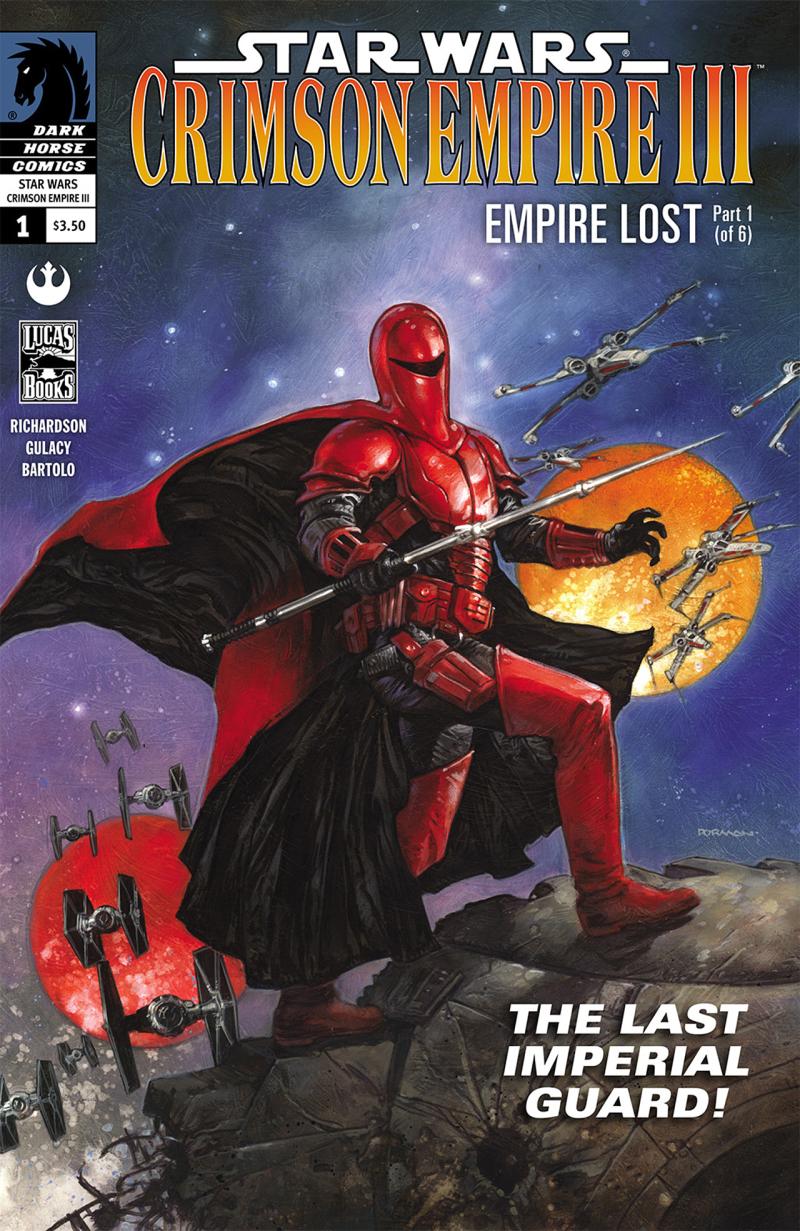 What is it ? : We begin with a New Republic Dauntless class cruiser detecting an unidentified older vessel and following it back towards it's base, but too late the captain of the Dauntless class cruiser realises his ship is being lured into a trap and the ship is destroyed by fire from the planets surface.
On the world of Meenka, Kir Kanos still using his Kenix Kil identity picks up a bounty reward, and is warned that his type isn't liked here so he should leave. On his way back to his rooms he is attacked by a group planning to rob him of the money he just made and he easily fights them off, when he is met by a contact who warns him people are waiting for him in his rooms.
Kanos sneaks into his rooms, and defeats those waiting for him, only for another group to enter, this one led by Boba Fett. Fett tells him he has been asked to deliver him alive to a client, and rather than fight Kanos agrees.
Meanwhile on Coruscant, the children of Han and Leia, Anakin, Jacen and Jaina Solo sneak past guards into the a meeting of the Senate, watching their mother perform her duties.
After the Senate, Leia meets with Mirith Sinn, who is head of Leia's personal security, but Sinn tells Leia she intends to resign as a droid nanny comes and collects the children. Sinn warns Leia that she is in danger from Kir Kanos, and that she is not the right person to defend her from the ex-guardsman.
On Yavin 4 a couple of Jedi trainees spar with lightsabers, when Luke joins the fight to train them in the Jedi style of Ataru, a more aggressive form of combat which not only uses the saber but your body as well. This is watched by Vima da Boda who afterwards warns Luke that his family is in danger from a man called Devian.
Slave One arrives at a world, and Kir Kanos and Boba Fett disembark into a hall emblazoned with the Imperial Symbol, containing Clone Wars era vessels such as V-Wing's and ARC-170's, where Kanos is welcomed to the heart of the restored Empire. . .

High Points : I had problems with Crimson Empire II trying to be a mystery, but not actually giving us enough information about any character motivations early on to make any sense of the story. And that's definitely not a problem that Crimson Empire III has, Kir Kanos is working as a bounty hunter, it seems clear what he's doing, Mirith Sinn in Leia's head of security, her motivations seem clear as well.
While there's mystery here, such as who is the Restored Empire, and why do they seem to be using almost exclusively Clone War era equipment, this leads us on nicely into the story rather than just being confusing for the sake of it.

Low Points : However, this issue gets a low mark from me because it just seems to be introducing so many characters, and while I have a fairly good knowledge of the Expanded Universe beyond Return of the Jedi, I had to reach for my memories of who Jaina, Jacen and Anakin Solo were, why Boba Fett is wandering around after being eaten by the Sarlacc, etc. And I found myself wondering if some of the other characters are someone I'm supposed to recognise. The crew of the Dauntless Class at the beginning, the Senator that Leia is debating who warns of Nom Anor's acts of sedition, etc. Am I supposed to know who these people are?

I also have to comment on the shapely Nanny Droid that apparently cares for the Solo children, it seems to be designed to be extremely femininely shaped with breasts and hips, and as it walks away the artist fills an entire frame with an image of shapely feminine Droid Ass, which felt seriously out of place and immature.

Although Mirith Sinn hints at it, the opening text of the story, not the Text Crawl, but literally the introduction before the story begins, tells us that Kir Kanos is still trying to punish those that caused Palpatine's death, and is now hunting Luke Skywalker and Princess Leia for their parts in his death.
Although it does kind of make sense, I did find myself wondering, "since when?", as he never mentioned them in the past, and it seems outside the scope of the original story.
Reading about the concept of the story, it apparently was conceived as a story for the old Marvel Comics that an Imperial Guardsman would come hunting for Luke to get revenge, but LucasFilm wasn't interested in telling that story yet. And later the idea was revived and transformed into Crimson Empire. But if that was always the plan, it would have been nice if it had been hinted at during the first two stories, as it just feels like this idea has been plucked out of the authors ass so they can tell another Kir Kanos story.

So what do you really think ? : It's pretty enjoyable and interesting, even if it did seem a little cluttered with characters and overwhelming. The first two Crimson Empires were kind of their own things, telling a story away from Luke, Leia and Han and giving us something which expanded the universe away from just those core characters. But it now feels like it's success means they're determined to tie it in with the core story, and it simultaneously bombards us with characters who haven't been part of Crimson Empire before, and makes the entire universe feel smaller as it must return to just these few characters.

Final Words : I'm definitely intrigued by the Restored Empire, and my initial thoughts is that they've equipped themselves with Clone Wars era equipment put into storage as it was phased out and I think that's a pretty interesting idea of the Empire forced to return to using it's old supplies, but using that to return to the glory of it's establishment and the victory of the Republic in the Clone Wars.
But as always, we shall see . . . .