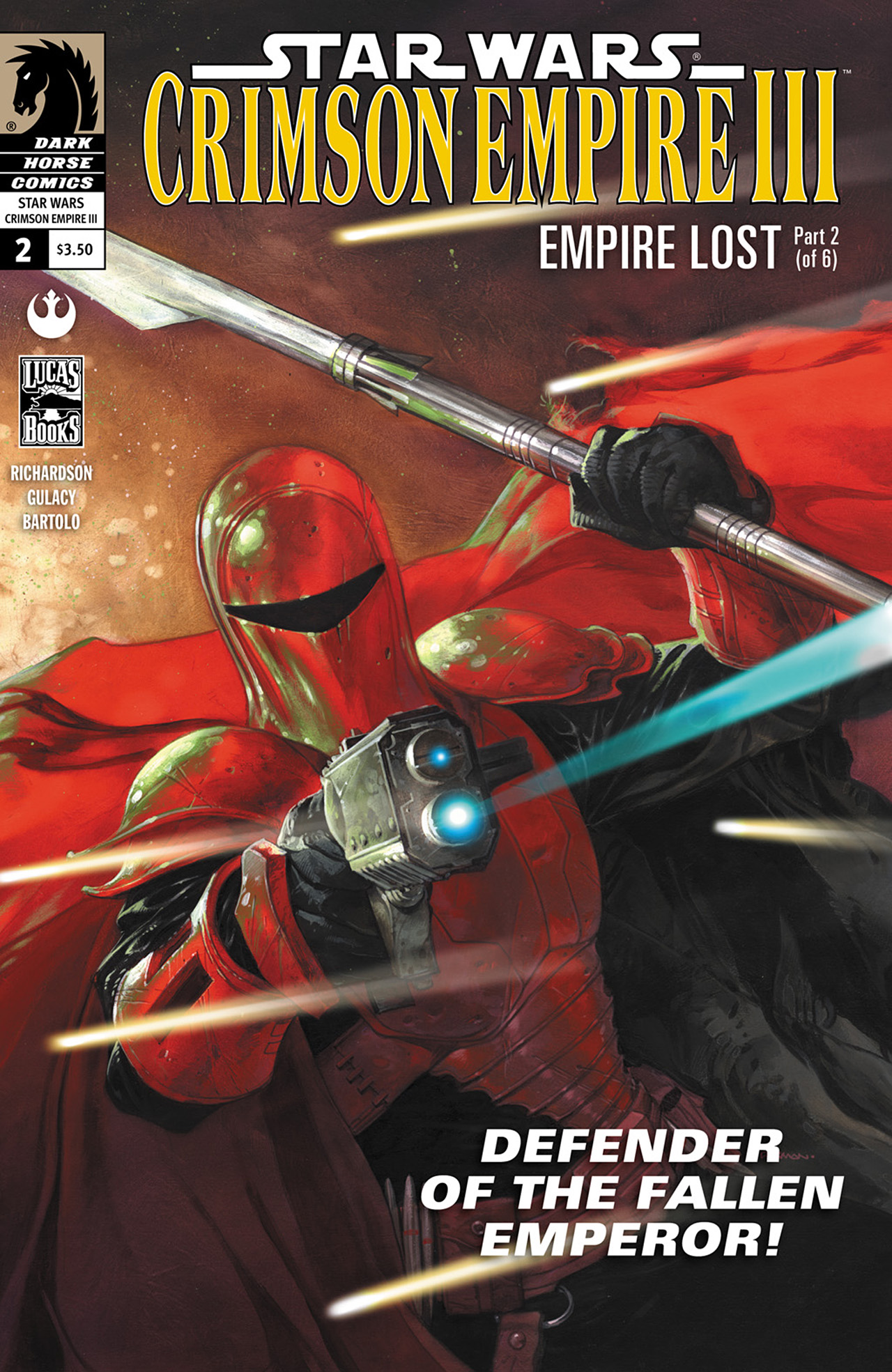 What is it ? : On the world of Nyara a group of black armoured figures raid a toxic weapons dump, and steal a rare and dangerous lump of a metal called Zinethium, before setting off explosives and escaping off world.
On the remote world of RZ7-6113-23, Kir Kanos is delivered to the Restored Empire by Boba Fett who is paid and leaves, Kanos is taken to guest quarters by an Imperial Officer who gives him a gift which he is told they would be pleased if he would make use of it later.
The officer then visits his commander, a heavily scarred officer, Ennix Devian and reports who tells him if everything goes well they will see the destruction of their enemies and the restoration of the true Empire.
On the world of Orinda, Admiral Pellaeon meets with Feena D'Asta who tries to convince him to end the war with the New Republic and sign a peace treaty, and although he is worried that his supporting Moffs would rebel against any such action, she promises the support of her father in calming them and keeping them loyal.
On the world of Adumar, the cloaked figure of Nom Anor is speaking against the New Republic, raising the crowd by pointing out that the Republic became the Empire, and the New Republic just restores the original and is headed by the Daughter of Darth Vader himself. As he finishes he is met by a man who reports success of their mission and delivers the Zinethium to him.
On Coruscant, Mirith Sinn discovers one of Leia's personal Noghri guards dead and discovers a group of armoured figures attempting to assassinate Leia and her family. With the aid of the Noghri she rescues Leia, and they reach the childrens rooms only to discover that Anakin Solo has been taken hostage by the last remaining intruder. There is a stand off, but the children's Nanny Droid distracts the intruder giving Sinn a chance to gun him down.
Afterwards Leia and Sinn speak, and Mirith reveals that she never knew how she would react to a member of Leia's family being in danger, as Leia's father Vader killed Sinn's husband, so she had worried that although she was loyal to the Republic, she might subconsciously want Leia to suffer the same loss and the two women embrace.
Back on RZ7-6113-23, Ennix Devian is holding a meeting where they discuss the failed raid on Coruscant, and Devain introduces Kir Kanos who enters the chamber clad in full Royal Guardsman robes and equipment, and Devain tells the room, Death to the Imperial Remnant, Death to the New Republic, Long Live the Restored Empire, Long Live Emperor Palpatine. . . .

High Points : Wow there's a lot going on in this issue, we jump between countless worlds and so many groups, we've got the Republic with Sinn and Leia, the Restored Empire with Devain and Kir Kanos, and we've got whatever Nom Anor is up to.
There's a whole load happening, and the story is driving itself forwards quickly and building towards what looks like Galaxy defining events.

Low Points : But perhaps there's a bit too much going on, we swap worlds every couple of pages, and I'm still not sure who's important or not. Am I supposed to have paid attention to that Gungan Ambassador that Mirith Sinn spoke to on Coruscant? Is he part of the raid, as only moments later Sinn discovers the dead Noghri, so I wondered if the Ambassador had done it? Or was that encounter just colour and world building?
It's just all a bit confusing, especially as I'm someone who didn't keep up with every comic and every book, so I'm not sure whether some of these are just one off characters or whether they're known elements of the Expanded Universe.

So what do you really think ? : The artwork is still brilliant, and it's an entertaining enough read, but I feel as if the Expanded Universe was beginning at this point to become a little buried in it's own content and continuity. As for example, I read the Thrawn novels, so I'm aware of who Admiral Pellaeon is, and was vaguely aware he became the leader of the Imperial Remnant, but I had no idea whether Feena D'Asta is normally seen as part of the Imperial Remnant, or whether she has just been incorporated as part of the Crimson Empire storyline?

Final Words : So what's making Ennix Devain consider his Restored Empire as different to the Imperial Remnant?, why did he say long live Palpatine? does this mean we're going to get another Palpatine Clone?
There's a bunch of interesting questions, although I'm a little concerned that the answers aren't going to be that interesting, but we shall see . . . .