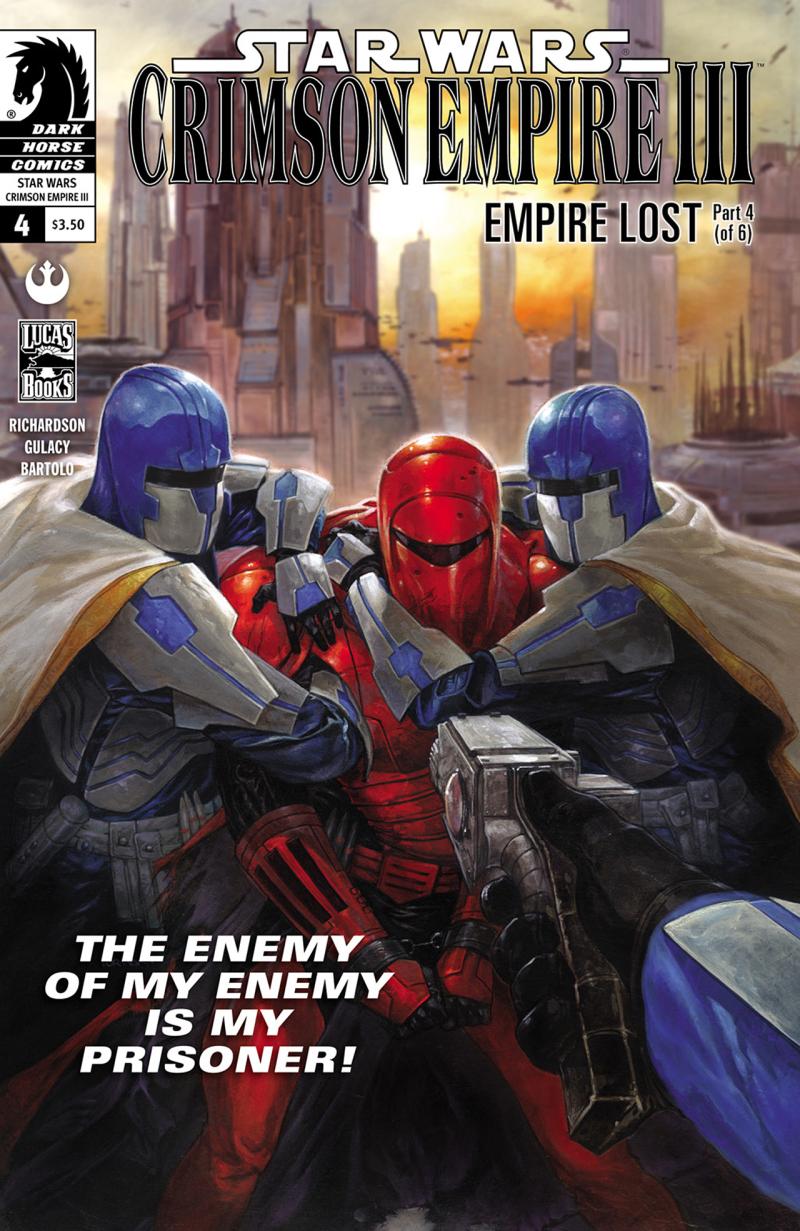 What is it ? : Han Solo is commanding a Mon Calamari Cruiser above the world of Pallaxides and discusses their next actions with his command staff, as they are pressing victories over the Imperial Remnant. When a new officer, Lar Ndigo, arrives bearing instructions from Princess Leia that Han is to return home, Han briefs the officer on taking command of a vessel to investigate the loss of the Dauntless Class Cruiser Endor.
On Coruscant they've detected a vessel approaching under a "white flag" signal of peace, and when it lands and Kir Kanos disembarks demanding to see Mirith Sinn they arrest him because he is still wearing his Royal Guardsman uniform.
Sinn, Leia and Luke discuss the offer of peace talks from Feena D'Asta, and Luke asks why they should trust Sinn when under her command assassins have gotten very close to killing the Solo children. Lukes suspicions are raised even further when the news of the last Royal Guardsman, a man with a known oath to kill both Luke and Leia, has arrived and wants to speak with SInn.
On RZ7-6113-23, Ennix Devian is pushing his plan forwards as they've detected a New Republic vessel arriving investigating the disappearance of the Endor. General Bernard Vota is resistant to changing their plans as rushing could cause them to collapse, but Devian tells him to follow orders, and that he'll give him as much time as possible by trying to distract the Republic vessel.
Sinn meets with the imprisoned Kir Kanos, and he warns her of the danger to the Republic and that he has abandoned his plans against Luke and Leia, that the Emperor is long dead and their deaths would serve no purpose. But Sinn tells him he has arrived late as there has already been an assassination attempted against Leia and Luke, but he tells her that the plan he is aware of involves the explosive Zinethium, and therefore is unrelated to the assassination attempt.
Lar Ndigo's Cruiser approaches RZ7-6113-23 when they detect energy build up on the planets surface, and he correctly guesses that it is weapons powering up and actives his shields, which barely take the blast when it hits. The cruiser is attacked by V-Wing starfighters and scrambles it's own A-Wings in defence, targeting the weapons on the surface with it's own and taking them out. As it's fighters mop up the V-Wings he orders a landing party put together to find out what secrets the world is hiding.
Sinn takes Kanos to see Leia, who finds it difficult to trust a man with a known plot to kill her, but Luke senses no treachery and tells her to trust Sinn, and Sinn and Kanos depart in a Nova Courier starship, However technicians report that they've detected an energy build up on the ship that Kanos arrived on, and Luke realises that it's the Zinethium, and charges aboard the ship to take it as far away from the city as possible so the explosion won't hurt anyone.
He races the ship into orbit as time ticks down, and at the last second he launches an escape pod, but the ship is consumed by a massive explosion and Leia looks at the explosion in the sky and calls her brothers name . . .

High Points : I really quite stretch to find good points about these comics, because they're so darn competently put together, the artwork is great, the dialogue is interesting and the pacing is good. However I'm really not finding the characterisation or plot particularly compelling, so I end up struggling somewhat.
For example, why did they bother to introduce new character Lar Ndigo to explore the mystery of RZ7-6113-23 and the disappearance of the Endor? Why not use Han Solo, he's literally there already, but only standing around at meetings. Why have one of the heroes of the movies turn up in what only looks like a glorified cameo?

Low Points : Okay, so last issue, Kanos stole an Imperial gunboat, a cool design with swept forward wings. used by the Empire during the Galactic Civil War. However the ship that explodes this issue is a Nu-class attack shuttle, a Clone Wars era vessel? Is this just an error (and if so it's a pretty big one) or did he swap ships at some point on his voyage here.

As for the plan itself, it does seem to require a fair amount of luck to work, as I would have thought that after Kir Kanos was imprisoned, his vessel would have been taken away to some kind of impound, rather than just leaving it parked at the Government buildings. In fact, why did they even let him land there? Surely the Empire could send suicide bomb laden vessels to land there under this "white flag" signal and taken out the government at almost any time.

Luke's characterisation varies somewhat through the issue, as he's untrusting of Sinn, making her reconsider her position with the Republic because she is aware she is not trusted. But then later he states he can sense no treachery from her, so Leia should trust her? Why didn't he just sense her earlier and avoid offending the person responsible for guarding his niece and nephews?

Oh, and now Kanos has abandoned his oath to kill Luke and Leia? Why even mention it at the start of the comics, why not just have them assume he's dangerous to everyone who was part of Palpatine's downfall, and then have them discover from him that they're not part of his hit list, which is why they've not been attacked for all these years. It's a clumsy attempt to raise tension, instead of making it a mystery to the same purpose.

So what do you really think ? : Dark Horse comics are incredibly skillful at what they were doing, but I'm really not gripped by the plot, as the Restored Empire really doesn't seem that big of a threat, with their army surplus equipment, seemingly only about as powerful as a planetary militia. The bad guy isn't that memorable, and his plan seems ineffectual.
The characterisation is spotty, with Sinn being commited to her duties one minute and reconsidering them the next, Luke for the above mentioned reasons, and Kanos motivations all over the place (why does he care if the Restored Empire is going to murder Leia?).

Final Words : Two issues to go, and I really hope this story redeems itself, but it seems to have gotten so far from the concept of the original, where it was just about one Royal Guardsman following his duty and oath beyond Palpatine's death, and now being about a possible peace between the Imperial Remnant and the New Republic and how another faction is putting that in danger.
From the aspect of Crimson Empire itself, it really seems to have come from nowhere.
But as always, we shall see . . . .