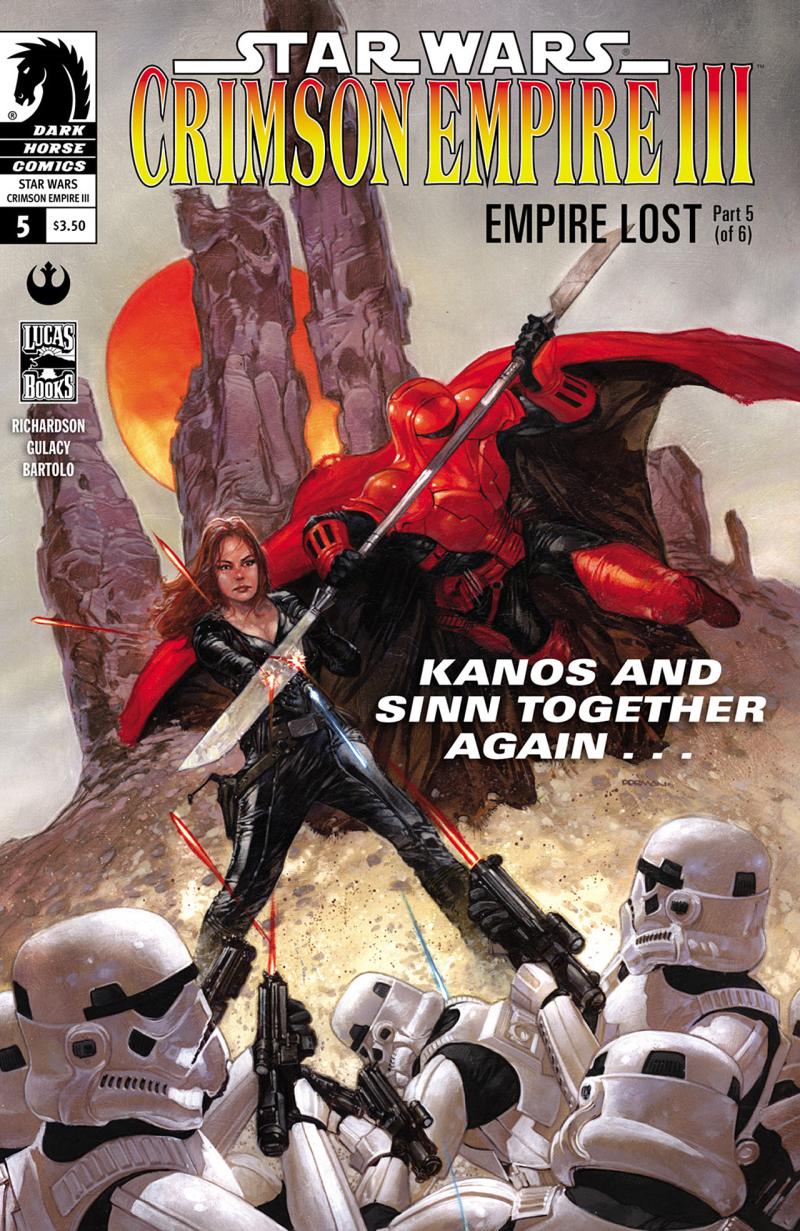 What is it ? : Leia watches the explosion from the Zinethium bomb aboard Kir Kanos' ship, which Luke had piloted into orbit. She believes that no one could have survived the massive fireball and is rushed away by speeder. However she is contacted by Luke, who had departed the ship in an escape pod, and has been rescued by an orbiting ship, he puts the blame for the bomb squarely on Kir Kanos.
Meanwhile, Mirith Sinn and Kir Kanos arrive at the rendezvous point for their meeting with Feena D'Asta and are disarmed before they can meet her. However Kanos' presence causes the other Imperial representative, Zam Basdor to walk out because this is the man who murdered Carnor Jax and the Ruling Council of the Empire., but shortly after he leaves the meeting is attacked by Stormtroopers, and even though Sinn and Kanos manage to defeat them all, Feena D'Asta is killed.
Ennix Devian, and Bernard Vota are aboard their fleet around RZ7-6113-23, slipping away from the world and hoping to not be detected by the Republic Cruiser which they recently just attacked. The Landing force from the Republic Cruiser fights a token force of Stormtroopers, but as they penetrate the base they discover it is abandoned, just as the entire complex is destroyed in a massive explosion killing them all.
Kanos and Sinn contact Leia and tell her of the death of Feena D'Asta, and although Luke argues that Kanos is responsible they ask to be allowed to take Feena's body back to her father to explain what happened, and Leia grudgingly agrees, while saying she will contact Pellaeon.
Pellaeon is informed of the attack on the meeting by Zam Basdor, who blames the Republic, and although he is suspicious of how Basdor survived by mere luck of timing, he orders his forces to attack Coruscant in retaliation for the death.
Han Solo receives a communication from Lar Ndigo aboard the Republic Cruiser orbiting RZ7-6113-23 of what has occurred there, and of the Fleet he detected leaving.
Mirith Sinn and Kir Kanos arrive at Nez Peron to inform Baron D'Asta of the death of his daughter, and on being told of Ennix Devians involvement he figures out Devians plan, to strike at Pellaeon while his forces are absent attacking Coruscant. He sees the chance for peace slipping away, but comes up with a way to get Pellaeon to recall his forces, and offers to reintroduce the pair to someone.
Han Solo's fleet detects Pellaeons on course to Coruscant and he orders his ships to return to the planets defence, fretting that he planned to return to see his wife and children, but now is just returning to another battle.
Meanwhile around Orinda, Devians forces emerge from Hyperspace and see the world only lightly defended by a few Star Destroyers, their superior numbers breaking through the defence lines quickly, and Devian remarking that Pellaeon has made a fatal mistake. . . .

High Points : Once again the story is skillfully handled, moving forwards quickly even though the plot doesn't seem to make a lot of sense. It seems to me to be a bad story, wonderfully told by a skillful storyteller.
I was especially impressed at one piece of the art, where Han Solo is holding his face in his hands which really expressed the emotion of the moment and brought me back several times to admire it.

Low Points : If Devians outdated ships are a match for modern Star Destroyers, then why were they ever retired? The Emperor does seem like the type to spend money on new ships when the old ones were fine, if he could have been spending that money on shiny new Death Stars.

How does Hans fleet detect the movement of Pellaeons forces heading to Coruscant? They're completely across the galaxy, and as far as the movies have made out, it's not possible to track vessels through Hyperspace. It'd be different if they mentioned having a spy within the enemy fleet, but they don't, they analyse it's movements and determine its target is likely to be Coruscant.

Oh, and lastly, the Imperial ambassador called Zam Basdor? Really? Honestly? That sounds like a name a Gamesmaster would come up with on the spot when he forgot to name an NPC. I know Star Wars doesn't have a great history with character names, but this is the worst yet.

So what do you really think ? : It's an easy read, which keeps your interest, but Crimson Empire III isn't a classic by any means (unless the final issue proves excellent), and these sequels are definitely a matter of diminishing returns. As the coolness of Kir Kanos is lessened by each successive bad sequel, and his and Sinn's will-they won't-they relationship not carrying my interest at all as I just don't care about it.

Final Words : The story is being particularly obvious, with the mysterious figure that Baron D'Asta is "reintroducing" Sinn and Kanos to being obviously the clone of Feena D'Asta from Crimson Empire II. And the spy within Pellaeons forces being obviously Zam Basdor. But I suppose we'll see for sure during the final issue next time . . .