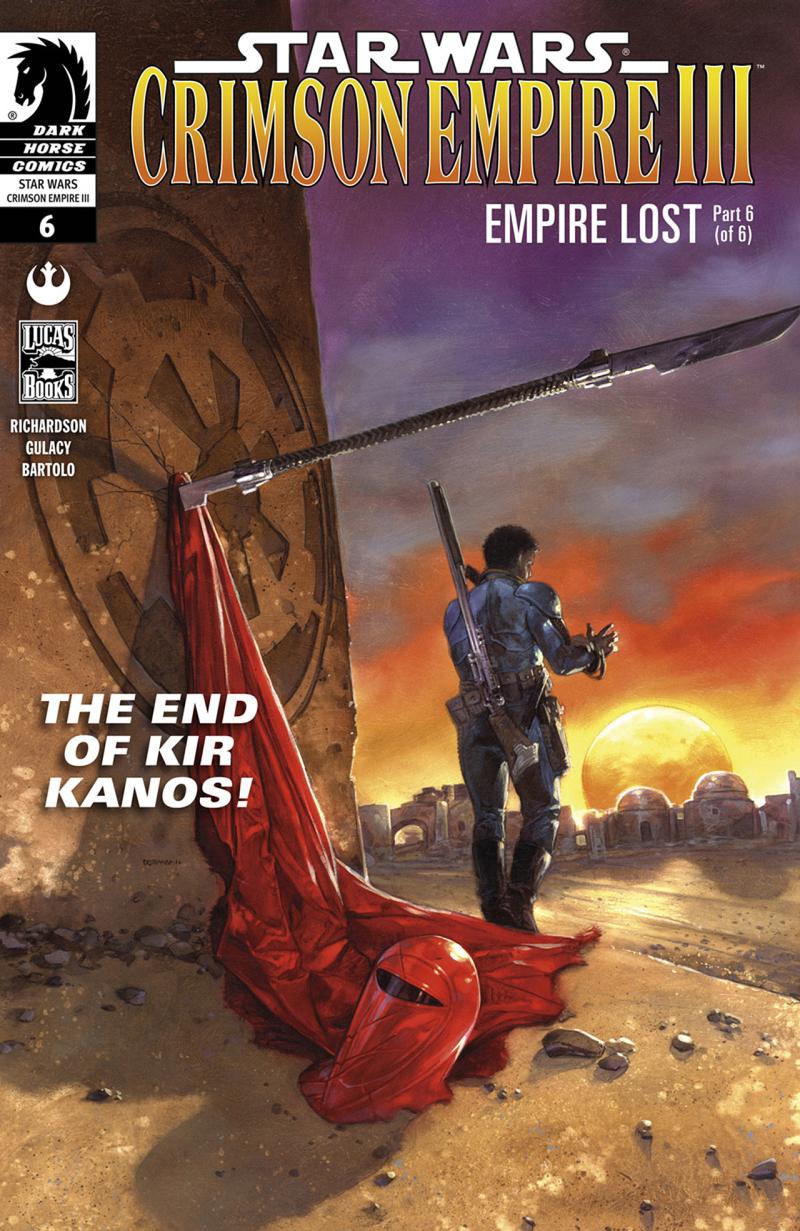 What is it ? : Han Solo's fleet is rushing back to Coruscant when they detect that Pellaeons forces which they are trying to intercept has disappeared, they eventually locate the ships having turned back to Pellaeons base at Orinda which is under attack. But Han is astounded as to who it is that is attacking the Empire.
At Orinda, Pellaeons defensive fleet is broken, and Stormtroopers led by Ennix Devian have penetrated Pellaeons base itself, and when he is surrounded and massively outnumbered, Pellaeon orders his personal guard to surrender. Devian reveals to the seemingly defeated Admiral that he has had a spy within his government in the form of Zam Basdor and Pellaeon quickly pulls his blaster and guns down the man, saying "So die traitors".
He then asks Devian to surrender, and Devian responds that he is in no position to make demands, but Pellaeon reveals that Devians assassination of Feena D'Asta has been revealed, and Baron D'Asta's forces have been waiting to strike against Devians, which are now being smashed by the superior forces of the Imperial Remnant. And D'Asta reveals the clone of his daughter, telling Devian that his assassination attempt failed who enters accompanied by Kir Kanos and Mirith Sinn.
A skirmish breaks out between all the assembled Stormtroopers, and Devian flees but is confronted by Kir Kanos, and the two fight with Force Pikes, with Devian managing to gain the upper hand. But when he has Kanos speared with his pike, he pauses to monologue as to how he was trained by Vader himself, giving Kanos the chance to turn the tables, and tell him he never learned Vader's most important lesson, to never stop fighting until your opponent is dead.
Sinn arrives with news that Devians forces are defeated, but they must leave as Pellaeon has issued instructions for Kanos to be arrested for crimes against the Imperial Remnant including the murders of Xandel Carivus and Carnor Jax, but Kanos collapses from blood loss.

Some time later, Mirith Sinn is before the New Republic council being questioned, and tells them Kanos was innocent of planting the bomb to destroy them, and that he is dead anyway. She then resigns and walks out, and Leia orders them to let her go as she has served the Republic faithfully and deserves her freedom.
Meanwhile at a hidden location within the D'Astan system, Kir Kanos is climbing aboard an X-Wing fighter, while Baron D'Asta and the clone of Feena D'Asta wish him well, although the Baron doubts someone with Kanos talents can remain hidden for long.
Kanos gives the Baron his Royal Guardsmans robes, and says that he regrets not having a chance to speak with Sinn because of his injuries and departs in his fighter. As they watch him go, the Baron declares that Kir Kanos is dead, but he has gained a new life, and an Empire has been lost. . .

High Points : I'm having problems saying nice things about this issue as the story and dialogue are a total mess, although remaining skillfully told and beautifully illustrated.

Low Points : So, let's start off with Pellaeons plan. He knows Devian is about to strike. He knows that the assassination is false, and he knows he has superior forces bolstered by Baron D'Asta's ships. But allows Devian to personally confront him with superior forces, and even draws and uses his blaster, hoping that no-one just guns him down? Why not just smash Devians forces as they arrive?

What the hell do Baron D'Asta's final words mean? Why is Kir Kanos now dead? It's not like anyone would seriously trust that this man known for being incredibly sneaky is now dead when they can't even view the body! Why is an Empire Lost now? Surely it was lost when Palpatine died?
And if Kir Kanos truly had gained a new life, settling down with Sinn on a farm somewhere, taking up a peaceful existence of happiness with the woman he loved, then that part would be true. But Kanos is heading off in his bounty hunter disguise once more, which is definitely part of his old life.
It's merely a couple of title drops, which sound as if they are significant, but really aren't.

And so after all of this, Kanos and Sinn don't even end up together. We hear how much they care for each other, this really just seems like dragging the story out so they can make a Crimson Empire IV.

So what do you really think ? : It really labels itself as the finale of the Crimson Empire saga, meanwhile setting itself up for a sequel. Crimson Empire III is a mess, and one of so many missed opportunities.
The story could have been so more interesting if Kanos had indeed fallen in with Devians forces, becoming a figurehead for the Reborn Empire. Thinking that he idealises all that Palpatine would have wanted, before realising that he himself is betraying his oath, and bringing the whole thing down from within leading to the death of Kir Kanos and the man having to find a new purpose, potentially with Mirith Sinn.
But nope, Crimson Empire III tries to feel epic in scope, but is too self contained to be of any real importance.

Final Words : So that's the Crimson Empire trilogy, a series I've been told about for years, but this has been my first read through.
The original is absolutely brilliant, creating a character which is interesting and cool to read about, off in his own story within the Star Wars galaxy. But the sequels dilute that character by not really giving him a true purpose any more, and by bringing his story right into the main Star Wars storyline with Luke, Han and Leia, making him very much a minor character in his own story.

Oh well, I don't regret reading them, but was saddened that the sequels never lived up to the promise of the original.