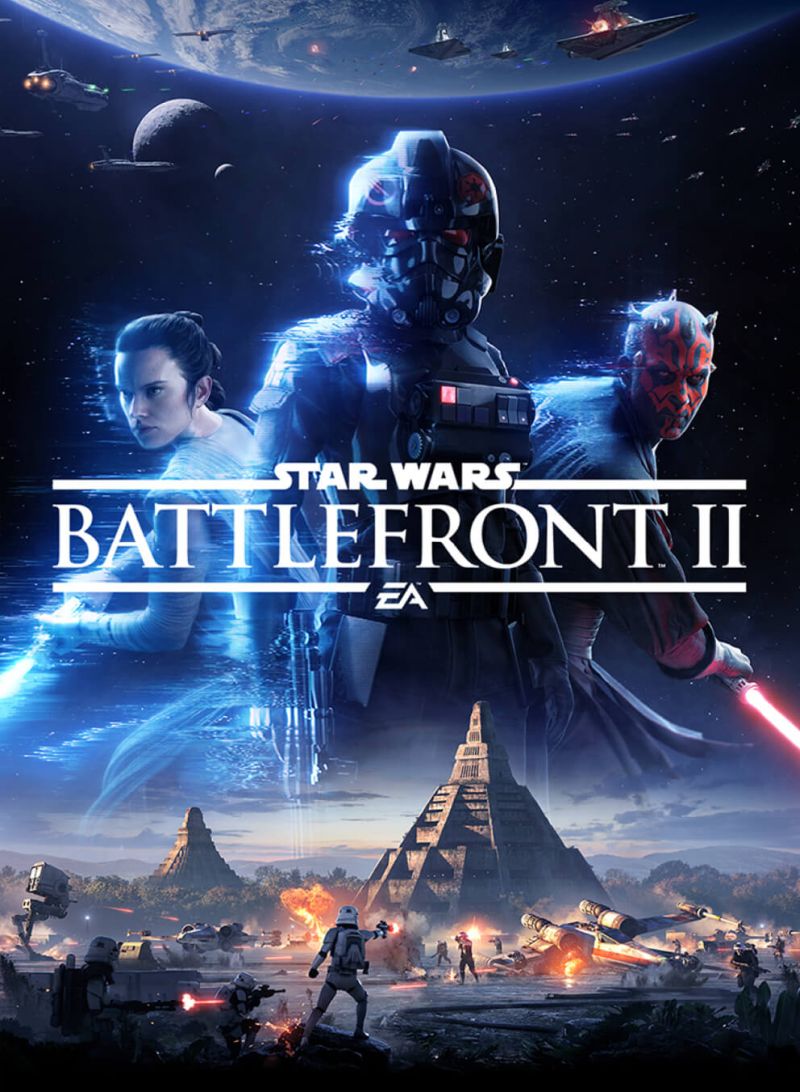 What is it ? : It's the 2017 sequel to 2015's Battlefront, rebooting the series which has been around since 2004.
As well as the multiplayer and battle style of the original games, where you play one of a group of types of soldiers, from stealth types, to heavy weapons characters, which respawn upon death within the same continuing battle. Battlefront II has a single player campaign where you follow the story of a single hero character Iden Versio who begins as an Imperial Special Forces officer, but after the fall of the Empire joins the New Republic battling the remnants of the Empire.
The game was later expanded with the Resurrection DLC, which continues the main characters story into the First Order Era of the Sequel Movies.

I'm not going to go into the plot in too much detail in this review, as I'll be going through it chapter by chapter over the next couple of weeks.

High Points : Although I've never played the 2015 version of Battlefront I did play both of the original games in 2004 & 2005, and enjoyed them for what they were. However the style of play wasn't exactly to my taste, as you played a generic soldier character, and died often, respawning as another member of your army. And as more soldiers died on each side, the balance of the battle went one way or another, until either you captured all of the bases to stop new enemy soldiers spawning, or they didn't have any reserves to spawn into play.
While it was an interesting peek into the disposable nature of soldiers in war, and was quite a fun way of playing, especially in the second game where you could jump into Starfighters and battle, before landing on enemy cruisers and fight your way through the vessel.
They also only vaguely followed the campaigns of an army through the Clone Wars or Galactic Civil War rather than any specific story.
This version of Battlefront II however does follow the story of a specific character as she goes from having full faith in the Empire, to losing that faith and turning against its remnants as the Empire collapses after the Battle of Endor.
There are a couple of sections where you take control of a different character, but mainly it follows Iden Versio, and builds her character introducing her father, her husband and her daughter throughout the decades that the story spans.
It also manages to use quite a few elements from the multiplayer game even though they are from outside the timespan of the story, with defence forces piloting Clone War era vessels, and one level set after the Battle of Endor being set on Naboo, and I found these inclusions to be excellent as these recognisable elements built the universe of the game and made it feel more expansive.

The introduction of your droid, ID-10, is fantastic, providing technical support, so while Iden deals with the combat, ID-10 hacks doors and other technology during missions. This means that while your droid is unlocking a door or the like, you must protect him and defend the position while he works, using this gameplay element to great and natural use.

I was also massively impressed by the storyline sections of the game where you're not directly involved in fighting, the search for Han Solo in Maz Kanata's Cantina on Takodana is really cool and makes the game feel more like an RPG than just a shooter. But my favourite section is the walk through the Imperial controlled city on Vardos, the Empire has fallen and is withdrawing from the planet and plans to orbitally bombard the surface as a lesson to world to not turn on the Empire. As you search for your target you see barricades set up around the starport, riots occurring on the other side as people panic and try to evacuate the planet. You see walker dropped into the crowds to control the situation, and hear people pleading for their children's lives.
It's a brilliant scene which really sells the collapse of the Empire, of the chaos of an oncoming disaster and the heartlessness of the Imperial forces abandoning and turning upon these citizens who have been loyal up until now. I found it one of the most involving scenes in a game I've played for quite a while, even though you're not doing much more than just walking through it.

Finally while it does introduce a more personal element to the game, it does keep the feeling of massive epic battles of the originals. The Battle of Jakku especially is incredibly expansive and epic in nature, as you take to the skies in fighters, while landing at points to support the ground battle by using artillery against AT-AT's, and taking out enemy launch faculties.

Low Points : While I'm a big fan of some of the characters in the game, especially Shriv Suurgav, a wisecracking Duro who is a squadron leader for the New Republic, and begins sceptical of your defection, but becomes a close friend in a relationship which feels earned. But your love interest just seemed to come from nowhere, although it makes sense on an intellectual level as you're both from the same squad and have gone through a lot together, it just seems a little sprung from nowhere and feels like something you're told that happens, rather than something which happens during gameplay.

Some of the later levels also feel a little grindy, as you battle wave after wave of identical soldiers in areas which are obviously designed as arenas rather than feeling like natural areas which just happen to have a battle occurring in them.

So what do you really think ? : I really enjoyed this game, the single player storyline is perhaps a little short (I've only got 8.4 hours in the game and I've completed both the main game and the expansion, which isn't a lot of game for a AAA title which originally retailed at 50 bucks (although I only payed a few pounds for it in a steam sale, so I'm not complaining)). But I really found it involving, and the combination of space battles and ground battles is really enjoyable, with skirmishing through asteroid fields, and then fighting your way through the corridors of enemy ships really fun.

I also really enjoyed the fact that the storyline sprawls over decades, starting before the Battle of Endor and ending at Jakku, with the expansion taking it right through to the Sequel movies. It tells a cohesive story and is far better for not just being set over the matter of a few days or weeks.

Final Words : So, I'm going to go through the story, chapter by chapter over the next few weeks, and stat out the characters and items from the game day by day, and I'll break down the parts of the game I thought worked best, and what I think translates to an RPG in interesting ways.

But I recommend playing this game if you can pick it up cheap, or if you think you'll get value from the Multiplayer game (which personally I've not even loaded as it doesn't interest me in the slightest).