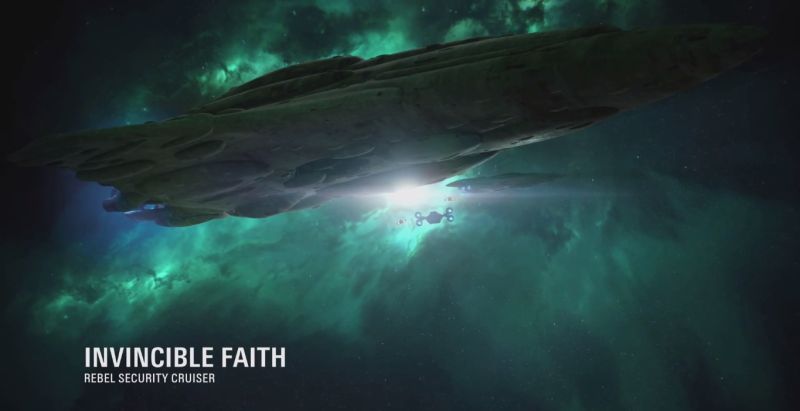 What is it ? : The game begins as your character, Iden Versio, an Imperial Special Forces Officer is escorted onto the Rebel Security Cruiser Invincible Faith aboard a U-Wing Transporter. She is taken to a cell, where she is interrogated by a Rebel Officer, who wants the access codes for her droid, telling her that "the Empires time has come", something Versio repeats back to him menacingly.
She is left unguarded in the cell, and speaks the droids access code aloud, which is transmitted to her droid which activates in a laboratory where a Sullistan engineer is attempting to slice into it's systems, as her capture was all a ruse to gain access to the Cruiser.
You swap over to controlling Versio's droid, an ID-10 called Dio, and you begin by stunning the Sullistan and finding a way out of the lab. Using stealth, you have to reach the controls to release Versio from her cell.
She communicates with one of her allies, Gideon Hask, who tells her that their vessel is ready to collect her after she completes her mission. So she sneaks through the vessel, passing a Rebel briefing on the fleet gathering at Sullust for the attack on the Second Death Star.
Eventually Versio reaches a computer room, where she deletes an intercepted message from Moff Raythe which if decrypted would warn the Rebels that the Empire already knows about their impending attack on the Death Star.
This activates an alarm, but Versio manages to arm herself and reach an airlock, ejecting herself into space. Her ship, the Corvus catches her as she floats in space and quickly jumps into hyperspace completing her mission.
Aboard the ship she reunites with her team of Hask and another agent named Del Meeko, and she asks them to inform Admiral Garrick Versio, her father, that the Emperors plan is safe.
As she looks at a hologram of the Second Death Star around Endor, she remarks that the Rebellion will die today.

High Points : The storyline is well done and weaves itself around events from the original trilogy, with Versio's mission to protect the secret of the Emperors plan at Endor being an interesting addition to the canon.

And of course as a AAA title from 2007, the graphics are excellent.

Low Points : It's the training level, so there's a lot of simple obstacles thrown in your way to teach you the systems of fighting from cover, slicing doors and terminals, using Deo, etc. This is essential for a game, to ease you gently into it's systems, but these levels are rarely very good or re-playable.
It also makes little sense as to the ease of Versio's escape, the Rebel's don't instantly put a Restraining bolt on her Droid? There isn't anyone monitoring her cell who sends guards when it becomes clear she is being rescued? There just happens to be a bunch of air vents that the droid can fly through?
It's all a bit convenient for a Security Cruiser.


So what do you really think ? : A lovely bit of storytelling, if a bit of a dull level.

Final Words : Coming late to this game, I've suddenly realised one of my players ripped off the idea of Deo for their character a couple of years back, as they wanted a small droid they could use for various things. They didn't really get what they wanted, as all I allowed them was pretty much a seeker ball, but with the programming of a Mouse Droid (so they could swap out its skills), so it definitely wasn't as overpowered or skilled as Deo.