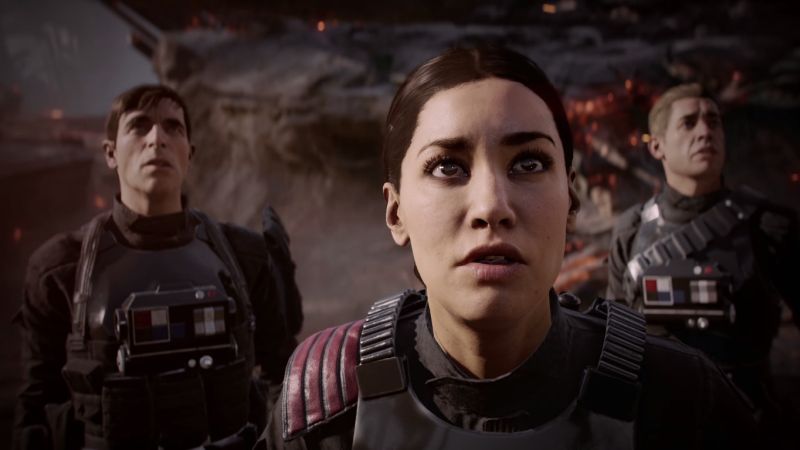 What is it ? : Admiral Versio watches from the bridge of his Star Destroyer, The Eviscerator, as the Battle of Endor rages around the Second Death Star, and he sees the crippled Super Star Destroyer Executor crash into the Death Star and calls it's Captain, Piett, an idiot.
Communicating with Iden, his daughter, and the rest of Inferno Squad he discovers that the shield generator has been destroyed, and he orders them to wipe out Rebel Troopers there and return to the Corvus to support the Emperors plan.
The three fight their way through the jungle, spotting the troopers they are to engage and eliminating them, but as they discuss the best way of returning to orbit the Death Star above them detonates, and they watch stunned as they are aware that their Emperor is dead.
Shortly afterwards, Admiral Versio contacts them once again, informing them that Vice Admiral Rae Sloane as the highest ranking officer remaining has ordered the fleet into retreat and they must survive and re-join the fleet.
They battle across the surface, engaging Rebel Forces and supporting and rescuing a squad of Stormtroopers as the enemy forces are reinforced by more soldiers from the victorious Rebel Fleet above.
They reach a launch platform, and fight Rebels who are destroying the Tie Fighters which are landed there, but successfully manage to acquire three and fly into orbit where they discover that the Corvus has been disabled.
As they fly through the wreckage of the Death Star towards their ship, they discuss how Inferno Squad was formed after the destruction of the first Death Star to stop anything like that happening again, but as they reach the Corvus they find it under attack by Rebel Y-Wing bombers.
They engage the enemy Starfighters, giving the Corvus time to repair, and are contacted by Admiral Versio who orders Iden to meet with him for further orders, while the others remain on the Corvus. With the Corvus repaired, it makes the jump to Hyperspace fleeing the victorious Rebel fleet.


High Points : The standout moment of this level is the most obvious, the destruction of the Death Star. We all know it's coming, this is the Battle of Endor after all, but seeing it from the point of view of the Empire is fantastic. The fact that they can barely comprehend what has just happened is amazing, the awareness that for the first time the Empire is truly defeated and that everything has just changed is brilliant.
These characters have truly been believers in the cult of Palpatine, and on seeing their infallible leader defeated their entire world view is shaken

Low Points : Now I don't know if it was just me, but I noticed that there's a severe lack of Ewoks during the Battle of Endor. as I only noticed a single Ewok later in the level. Now perhaps they didn't want to put you in a position where your powerful Imperial Special Forces character was wasting dozens of stone knife wielding furry savages, but I'm sure they could have been integrated into the level somehow.
But nope, not noticably for me, just wave after wave of Rebel soldiers, all of whom are apparently turning up at my exact location from orbit, as according to the movie there were only a dozen or so Rebels on the surface before that.

There's also a lull in the level design to allow everyone to discuss what's just happened, and to do a bit of an info dump about their history as they fly through the wreckage to the Corvus after escaping the surface. You've got action as you sprint for the fighters before they're destroyed, taking out Rebel saboteurs, then some talking as you slowly fly through wreckage, they action again as you fight to save the Corvus. It just makes the timing seem a little odd as getting the fighters seems like the natural end to the level with the explanatory dialogue in a cut scene as you fly back to the Corvus.

So what do you really think ? : It's quite fun to play as the Empire during the Battle of Endor, and the fact that the game takes us beyond what we saw in the movies, as the Empire flees and we see the Imperial Forces on the surface mopped up as more Rebel forces arrive from the victorious fleet above.

Final Words : While it's an enjoyable level of the game, it does just feel like set up, as the background for the campaign is put into place. The player is an Imperial officer who has kind of failed in her duty, so is fighting for revenge against the Rebel Alliance as she (at least for the moment) remains a true believer in the Empire.
But it's well done, and a good introduction to the game.