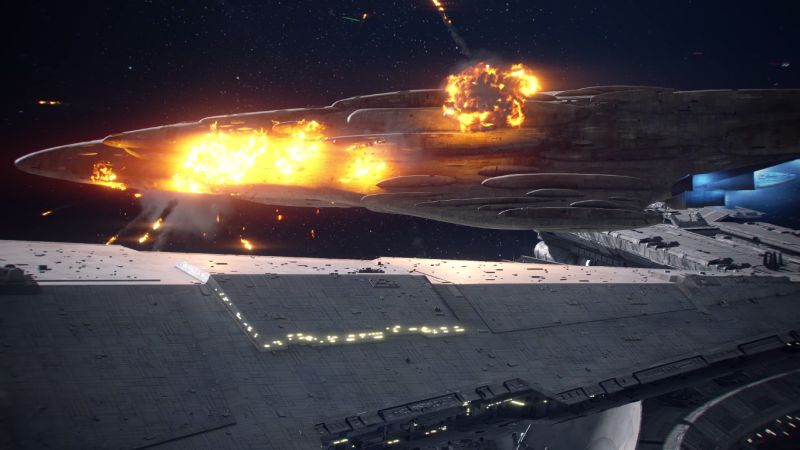 What is it ? : Aboard her fathers Star Destroyer, the Eviscerator, Eden Versio meets with Admiral Garrick Versio. He introduces her to a droid messenger from the deceased Emperor, it generates a hologram of Palpatine's face over it's own, briefing them on Operation Cinder, the Emperors last command. When she asks follow up questions, the droid acts aggressively because she doesn't have clearance, but her father hands her Inferno Squads next mission orders, telling her they are unusual, but these are unusual times.
She returns to the Corvus, and it heads to the shipyards at Fondor, where the Star Destroyer Dauntless under the command of Moff Raythe is carrying satellites essential for Operation Cinder, but they come under surprise attack by the Rebel fleet.
Launching Tie Fighters, Iden and Hask skirmish with Rebel Starfighters and protect the Dauntless from an attack by a CR-90 Corvette, however the Star Destroyer is being pummelled by Ion Cannon fire from a Mon Calamari Star Cruiser, so they board the Rebel Ship and fight their way through the ship to disable it's weapons.
As Dio, Iden's droid helper disables the power to the weapons, Hask and Iden must defend it while it works, and when the power goes out the atmosphere shields fail as well, and Iden is sucked out towards space, but is saved as pressure shields slam shut.
They return to their Tie Fighters, and return to the battle raging outside, and must disable the clamps now holding the Dauntless in place. Moff Raythe communicates with Inferno Squad telling them that, now more than ever, power is the only path to peace, and they will take part in cleansing the galaxy clean to remind people that the Empire is still in control.
As the Dauntless is freed from it's docking clamps, it rises from the shipyards, opening fire on the Rebel Cruiser, destroying it, and Moff Raythe tells Iden her father would be proud.

High Points : So the big action scene of the level is the defensive fight as Iden and Hath defend Dio as it slices through the systems on the Rebel Mon Calamari Star Cruiser. And although it's not much more than a defend the flag type mission, it makes sense of it as the droid performs slow but essential tasks, so it doesn't feel as forced into the game as these types of missions often do.
The game also proves it's flexibility with the swap between character and starfighter based sections within the same mission.

And the story introduces these Hologram faced droids which are the final messengers from Emperor Palpatine, carrying his final orders. An interesting idea, although I would have thought he'd have just issued ordinary droids which could have projected an entire hologram of him, but these are interesting and not any more ridiculous than many of the technological solutions that the Empire often uses. They might prove to be an interesting opponent for a group of players in an RPG, a droid contains a set of orders and instructions from Palpatine himself.

Low Points : We're getting into a bit of a routine already, where we get exposition dump at the beginning of a level, followed by all the action, and a bit of exposition at the end, which feels a bit formulaic. But the action is good, it just lacks any major events in the middle to keep the story flowing (whereas the last level had the destruction of the Death Star which changed the direction of the mission, going from an defence against the Rebel attack, to a retreat.

So what do you really think ? : This is one of the more forgettable missions of the game, although the defence of Dio is interesting enough and the game is well done.

Final Words : A fairly routine level, which is fun enough, but this lacks any major events you'll remember or speak about when the game is over. It just feels a little like filler.