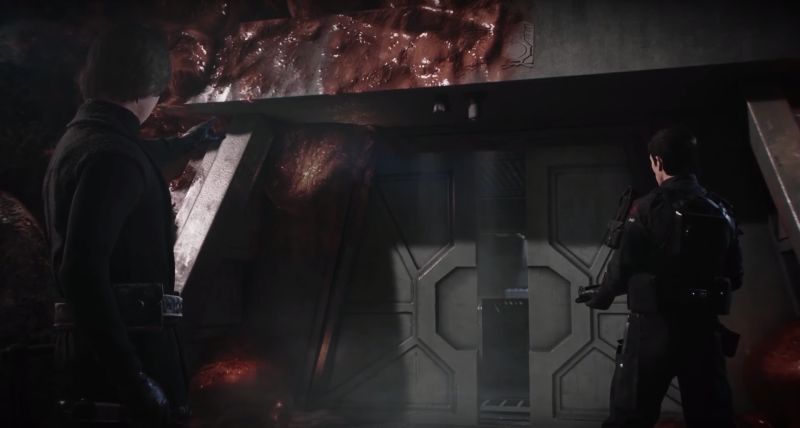 What is it ? : In this level features Del Meeko, one of the other members of Inferno Squad, as he is sent to the Emperors Observatory on Pillio. He has orders to disarm its defence system and destroy it, denying what the Emperor stored here to the Rebels.
However instead of controlling him, you control Luke Skywalker, who has come to the world to find the Observatory, and encounters Del who has become trapped in Amber by the native wildlife of the world. At first Del doesn't recognise Luke, until he uses his lightsaber to free Del from the Amber. Del asks Luke why he would help him, and Luke simply responds, "Because he asked!"
The two work together to escape the caves and reach the observatory, since they are both in danger from the Amber producing bugs, and Luke even defends Del while he disarms the defence systems. When they reach the observatory, Del cannot open it, and Luke realises that it can only be opened using the Force, so opens the doors for Del.
Del wonders why the Emperors observatory would have doors which could only be opened by a Jedi, and Luke tells him he already knows the answer to that, and Del asks Luke if he's telling him the man who destroyed the Jedi Order was secretly one of them.
They find a storehouse for numerous artefacts of Palpatine's, and Luke takes interest in a particular Compass and asks to take it. Del tells him his orders are to destroy everything here, and why would he let Luke take one of the items. To which Luke once again responds simply with, "Because I asked!"
As they depart, Del asks how they can leave and pretend that nothing happened, and expresses a doubt in the Empire, asking if Luke expects him to join the Rebellion, to which Luke tells him that he expects him to just choose to be better, and the two go their separate ways.

High Points : This isn't much of a level of the game, but does tell a well told story. This meeting between a member of Inferno Squad and Luke Skywalker which puts a dent in his faith in the Empire and its plans is well done. I really liked the callback at the end of the level, when Luke reminds Del that he helped him just because he asked for it, and that Del should let him have the compass just because he asks.
I also really liked that rather than Del suddenly turning on the Empire, Luke just asks him to choose to be better, which sets him on a path away from the Empire.

Finally, the compass Luke takes does show up again in the movies, with it appearing in Luke's dwelling in The Last Jedi.

Low Points : The level is a bit of a slog, and the worst instance in Battlefront 2 of that most hated level type, the escort mission. You get attacked by wave after wave of bugs, just moving from area to area where you must fight of hordes of identical creatures, and then must defend Del as he works from yet more of these annoying little bugs.

So what do you really think ? : Story wise, it's a great level, play wise it's a bit dull.

Final Words : While it's nice to see and control Luke Skywalker in a Star Wars game, I did find it threw me a little to suddenly be controlling someone else rather than just following Iden Versio's plot.
But storywise, this is an interesting little diversion from the main plot, filling in background on Del's decisions over the rest of the game.