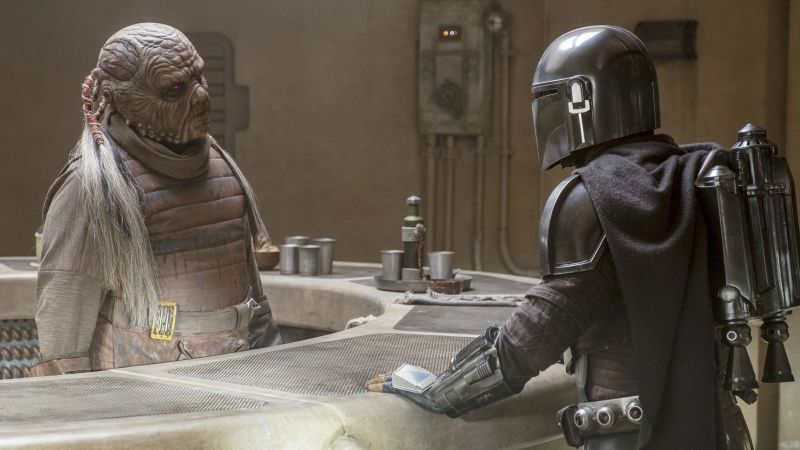 The Mandalorian: Chapter 9: The Marshal

What is it ? : The Mandalorian and The Child walk into an industrial town with walls covered with Graffiti, arriving at the door of a building, The Mandalorian asks for Gore Keresh and enters finding an arena where two Gammoreans fight with axes as an audience gamble on the fight.
Meeting with Gore Keresh, he asks for information on where other Mandalorians may be, as he thinks they can help with his mission to return the child to his people. Gore wants the Mandalorians Beskar armour as payment for the information, and when he refuses a fight breaks out with the Mandalorian using his whistling birds to take out several of the opponents, and pushing the child away to safety. In the melee, Gore escapes, but the Mandalorian tracks him down, and discovers that another Mandalorian has been seen in Mos Pelgo on Tatooine. The Mandalorian leaves Gore restrained, but helpless when he is attacked by predators which emerge from the darkness.
Arriving at Tatooine he lands the Razor Crest at Peli Motto's hangar, who is overjoyed to see The Child, asking for any offspring it creates as she wants one. He enquires about Mos Pelgo as it does appear on his maps, and Peli gets R5-D4 to show him on older maps where it once was, he borrows her Speeder Bike and heads off across the planet to Mos Pelgo's location, stopping to camp with some Sand People before he eventually arrives at the sandy, quiet town.
He heads into the Cantina and enquires after any other Mandalorians and is pointed towards the towns marshal who wears similar armour.
The marshal enters, wearing Boba Fett's armour, but the Mandalorian realises that this is no other Mandalorian as he removes his helmet almost instantly. Knowing that he has no information, but wanting to restore the honour of the Mandalorians by retrieving the armour, he threatens the Marshal who refuses to hand the armour over as he needs it to protect the town.
As they almost start a gunfight, the ground shakes and the Marshal offers the Mandalorian a deal, and they watch a massive Krayt Dragon move through the sand, and emerge to eat a Bantha whole. The Marshal offers the Mandalorian the armour, if he helps kill the Krayt Dragon to protect the town.
They head out to the Dragons lair on speeder bikes, with he Marshals looking like controls on the engine of Anakin Skywalker's podracer from Episode 1, and they talk with the marshal, Cobb Vanth, explaining how they hadn't finished celebrating the destruction of the Second Death Star, the fall of the Empire and their withdrawl from Tatooine, when the mining guild arrived to take over the now lawless town.
He managed to escape, and met some Jawa's where he bargained some stolen crystals for Fett's Armour and returned to force the guild out of town, where he has served as protector since.
As they move through some canyons, they encounter a pack of Massif's, which the Mandalorian befriends by speaking Tusken Raider, the Massif's owners emerge, and the Mandalorian speaks to the Sand People who he discovers want the Krayt Dragon dead as well.
After watching the massive Krayt Dragon eat a Sand Person attempting to lure it out of it's cave, the Mandalorian helps form an alliance between the towns people and the Sand People, where if they work together, the Sand People will never raid the town until the towns people break the alliance.
They return to the town, and the Marshal convinces the towns people to work with the Tusken Raiders, and they take a large amount of mining explosives, and bury them in a trench outside the Krayt Dragons lair. The creature emerges, spitting acid and dissolving Sand People, and isn't killed when the explosives detonate. The Mandalorian and Marshal harass it using their rifles and jet packs, until the Mandalorian comes up with a plan, allowing the Krayt Dragon to swallow him and a Bantha carrying more mining explosives, flying out in his jet pack afterwards and exploding the creature from within.
The combined townspeople and sand people celebrate, and the Sand people begin cutting the Krayt Dragon up for meat, and discover a massive Krayt Dragon pearl within it's guts. The Marshall hands over Boba Fett's armour, and the two hope they meet again as the Mandalorian sets off for his ship once more.
But a figure emerges from the desert watching him go, a figure who is revealed to be a scarred clone of Jango Fett.

High Points : Wow, The Mandalorian is back, and it's absolutely fantastic.
The action is amazing, the humour is great, the Child is super cute, there's little which remains to be said, this was fantastic, definitely the equal of the best of last season.

The episode did feel like the writers had played a lot of Knights of the Old Republic, the Sand People, giant Krayt Dragon and Krayt Dragon pearl all feel like the Tattoine section of that game. Which is no bad thing, just something I felt worthy of comment.

Low Points : Although it being great doesn't stop me picking faults. For example the episode is around 50 minutes, which feels slightly too long. Last season the episodes were of variable length, changing as required to tell each story, which is a fantastic idea. But this feels like it's having to stretch the story slightly to fill the time slot it's been allocated, which means it wasn't as tight a plot as many last year.

My criticism of The Mandalorian's last visit to Tatooine was that it had too many call backs and references, and this episode its perhaps even worse. But that's one hell of a complaint about an episode that it's just too much star wars.
But R5-D4 showing up again, now working for Peli Motto, Boba Fett's Armour, Anakins Pod Racer engine being used as a Speeder Bike, (probably) Boba Fett himself. Not only does the episode obvious have callbacks internal to the series, such as Peli Motto herself, but there's so much else from the movies that it just makes the world feel so small (where one random guy just happens to have Boba Fetts armour, and Anakin Skywalkers Podracers engine).
And the Star Wars universe has always been more interesting when it was more expansive.

And I have to comment on the Gamorreans, who just look like normal guys with Gamorrean masks on. Their bodies aren't the huge obese bodies of those seen at Jabba's palace, but the muscle torsos of a wrestler. Perhaps the ones at Jabba's palace were obese and unfit, living too much of a sedentary life and over indulging, which would make sense. But even then, these ones didn't look particularly good, more like a cheap cosplay version of a Gamorrean.


So what do you really think ? : I enjoyed it, and I enjoyed it a lot.
I've been worried about overload with the amount of things there's been rumoured to be in season 2, with Boba Fett and Ahsoka Tano, as well as many others being mentioned. But even I who cringe when a fan pleasing appearance is added to the show was quite impressed by the use of Temura Morrison at the end as presumably an older and scarred Boba Fett. It'll be interesting to see how they use him now the Mandalorian has his armour.

Final Words : Well a damn good start to the season, and now one episode every week until Christmas, I can't wait to see how it goes, but it's off to a very promising start. Please Dave Filoni and Jon Favreau (who wrote and directed this episode) old buddies don't let me down.