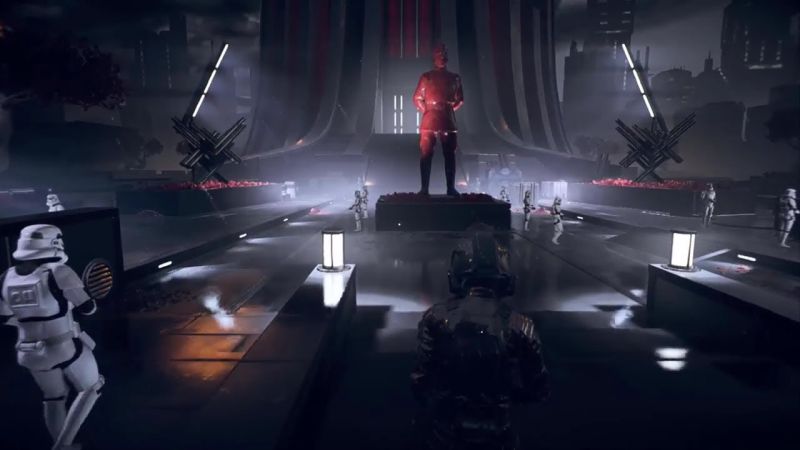 What is it ? : Del Meeku returns to the Corvus, and the team is briefed on their next mission. They are to extract Protectorate Gleb from Vardos, Gleb is an Aqualish who serves as headmaster of the Future Imperial Leaders Military Preparatory School, and raised both Hask and Iden.
However as they arrive in orbit around Vardos, Iden sees the oribtal bombardment satellites they helped rescue from Fondor being deployed around their home world. Iden rages at her father, saying that Vardos is loyal and is their home. He replies that the Empire is their home and the orders come from the Emperor himself, that seeing Vardos devastated will keep other worlds in line from fear that the same will happen to them. But Iden says she will not take orders from dead men, but her father reminds her that she will follow orders, and then contacts Agent Hask for a private conversation.
The Corvus lands at Vardos, as storms rage and heavy rain falls from the atmospheric disruption caused by the satellites above. The people are panicking and trying to reach the starport to leave, but Imperial forces keep them back as the Empire uses it's own weapons of war against the people here.
The three members of Inferno Squad reach the building where Gleb is, they discover she is among a group of other civilians, and Del and Iden decide to rescue them all, ordering them back to the Corvus. But Hask objects, that their orders were for Gleb alone and refuses to lower his weapon when ordered by Iden, telling her he has orders from Admiral Versio. Iden shoots him in the leg, and as they leave with the civilians, Hask informs the Admiral that she and Meeko have disobeyed orders, and Imperial forces are ordered to shoot on sight.
The way back is blocked, and the pair have to fight their way through the streets, eventually stealing an AT-AT walker to battle their way through the Tie Fighters and Scout Walkers sent against them, but lightning from the raging storms disables the Walker. A desperate battle breaks out around the Corvus as they get everyone aboard, and defend it from approaching Walkers, but they manage to escape, evading the Star Destroyers in orbit and slipping away into Hyperspace.
Meanwhile, Hask returns Protectorate Gleb to Admiral Versio, and is promoted to Commander for successfully completing his mission.

High Points : While its a whole load of fun marching an AT-AT through the streets blowing Imperial forces to bits, my favourite part of the level is the beginning.
You walk through the streets of Vardos as fences and more hold the people back, you hear rioting going on, and the shouts of people wanting to be rescued from the disaster that the Empire itself has brought here as punishment.
Stormtroopers salute you as you walk through checkpoints, and the rain lashes down as you see Walkers deployed against innocent people beyond the barricades.
You calmly walk through the fall of civilisation here on your homeworld, The Empire which swore to protect these people is now crushing them as an example to others.
It's a moving moment, which kind of reminded me of the beginning of Fallout 4, it's the end of things, yet the beginning of another story, as Iden and Meeku turn against the Empire.

Low Points : There's not a lot I didn't like in this level, after a fantastic beginning, it's fairly standard stuff as you fight your way back to the Corvus.
I would perhaps have liked if you'd rescued more people from Vardos, rather than just the few you find with Gleb, as a packed ship full of people you've saved would have felt more triumphant, rather than just a dozen or so survivors aboard your fairly substantial capital ship.
Also the fact that Hask remains loyal to the Empire, yet none of the crew have any say in the matter feels a little off.

So what do you really think ? : As obvious from the commentary above, I loved this level, and while the entire game is pretty darn great, this was the highpoint for me from a storytelling point of view, and should be shown as an example of setting a scene for games of the future.

Final Words : While I'm perhaps too gushing in my praise for this level, especially considering that I'm talking about a part of the game where it's not much more than a walking simulator, but the gameplay remains solid and fun, as it continues to do from here on out.