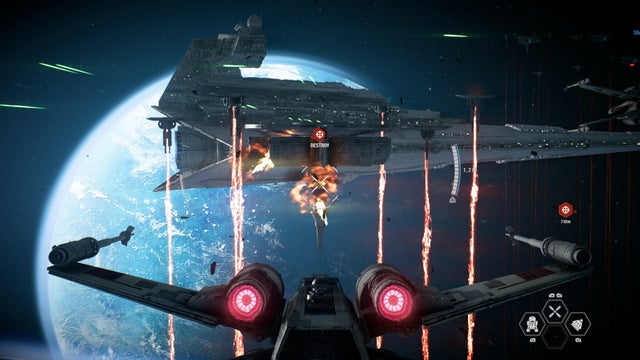 What is it ? : Iden Versio and Del Meeko as the two remaining members of Inferno Squad discuss what they're going to do next, especially considering that they're carrying survivors of Vardos. Del suggests that he'll take a TIE fighter and warm the Rebellion of Operation: Cinder, and she can the Corvus and survivors to safety, but Iden refuses saying they'll stick together through whatever happens next.
They send out a signal, and Danger Squadron led by Shriv Suurgav intercepts them, and they are captured by the Cruiser Restoration. Shriv doesn't believe them, thinking this is another trick possibly leading the Rebellion into a Trap, but Lando Calrissian arrives, and says he knows a thing or two about second chances, and offers the pair a set of X-Wing fighters and their freedom. Or they can help out against the Empire who he has discovered is targeting Naboo next for Operation: Cinder.
The pair decide to not join the Rebellion but to join Danger Squadron as they intercept the Star Destroyer Torment as it deploys the satellites above Naboo. The Rebels join some Naboo Starfighters in destroying the Satellites, and defending Y-Wing Bombers as they disable the Star Destroyers shields leaving it vulnerable to the Restorations cannons leading to it's destruction. Del and Iden spot troop transports delivering Imperial forces to Theed, the capital city of Naboo, and they follow in their fighters to aid the Rebels on the surface.

High Points : One of the shortest sections of the game, as we get a section of story as Iden and Meeko join the Rebels in fighting Operation: Cinder above Naboo. And this uses the assets available to the game from the Multiplayer extremely well, as obviously the multiplayer game allows you to play in different eras of the Star Wars timeline, from the Prequels through to the Sequels, which means that the game already contains the troopers, settings and vehicles from each of these era.
So the fact that we're battling above Naboo, and there are Naboo Starfighters fighting alongside the Rebels against the Empire.
Now the story accommodates this by saying that this is the local defence forces for Naboo, but it successfully makes the universe feel that much larger, that vessels from older eras are still sitting around and being used not by the major military forces of the Galaxy, but by the more minor local defence forces.

Low Points : As I said above, it's a shorter level, and it's just a short battle, skirmishing to take out the satellites, and to defend bombers as they disable the Star Destroyer.
It's quite a fun level, but there's not too much going on here, I kind of expected you to have to board the Star Destroyer, much as you did with the Rebel Cruiser around Fondor. But without that section, this level does feel incredibly brief.

So what do you really think ? : While it's enjoyable flying an X-Wing and getting to blow Tie Fighters out of the sky, it does feel like quite a small skirmish, with only a single Imperial and a single Rebel capital ship taking part. I definitely think it would have been better if there had been a few supporting vessels taking part, perhaps bring in Clone Wars era assets, such as Acclamator, Gozanti or Arquitens class vessels acting as support, with you having to take down the escort vessels so that the Restoration can get close enough to take down the Torment.

Final Words : Not a terrible level, just very brief, so brief that Wookieepedia rolls this level and the following one into one description.