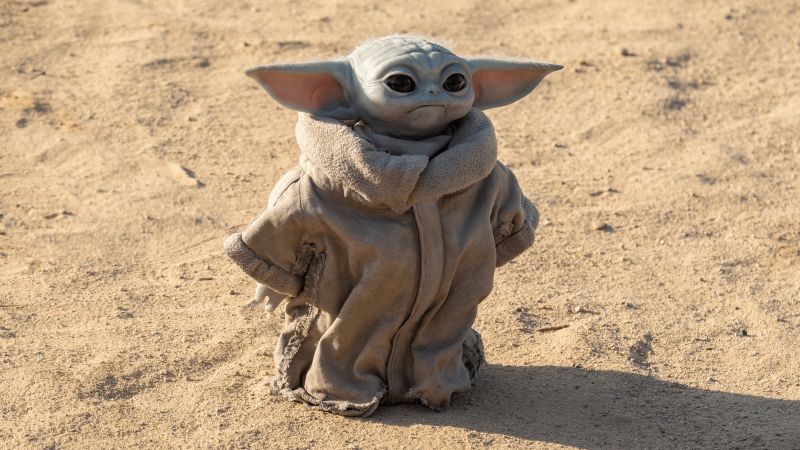 The Mandalorian: Chapter 10: The Passenger

What is it ? : The Mandalorian and the Child are heading back to Mos Eisley with Boba Fett's armour, when they're ambushed by some scavengers who spring a rope trap to make them wreck their speeder bike.
The Mandalorian takes out most of the scavengers, but one manages to get a hold of the Child and puts a gun to his head. The Mandalorian offers him the bike in exchange for the Child, but the Scavenger wants his Jetpack, which he hands over.
As the Scavenger jets away, the Mandalorian remotely controls the Jetpack and the Scavenger crashes to earth, while the Jetpack returns to the Mandalorian.
Peli Motto is gambling in a cantina, when the Mandalorian walks in with the child and Fetts armour. She asks him if he came all this way then killed the only Mandalorian for sectors, but he tells her he traded killing the Krayt Dragon for the armour, and she hopes that he brought her some of the meat.
She tells him that the person she is gambling with knows where other Mandalorians are, but asks him to pay her stake so she can win the information which he does.
She wins and they return to her docking bay, where her droids begin roasting the Krayt Dragon meat, and she tells him that there is a passenger who offers the information on some Mandalorians in exchange for transit aboard the Razor Crest, at sublight speeds. The frog-like female passenger doesn't speak standard, but through Peli explains that she is carrying her eggs to be fertilised by her husband, and he has seen some Mandalorians, but Hyperspace travel will kill the eggs.
He reluctantly agrees, and they take off making slow progress to their destination, when the Mandalorian heads down to his bunk to sleep. In the cargo bay he discovers the Child has opened the container of Eggs, and is eating one. He tells the child off, and locks them both in his quarters.
He is later awoken by an alarm, and he heads to the cockpit to discover two X-Wings have taken up position next to the Razor Crest. They hail him asking why he has no transponder, and he tells them he's flying a classic ship and doesn't need one under Imperial law, but they respond that he's in New Republic territory and all ships require a transponder.
They identify the Razor Crest as the ship spotted near the New Republic Correctional Transport, Bothan Five, when the Twi'lek Qin was broken out, and they activate their S-Foils preparing for combat. The Razor Crest swoops down to a planet surface, and the X-Wing pursue, but through fancy flying and a hard landing he manages to conceal the ship on the surface of the icy world beneath a ledge.
However the ice beneath cracks and the ship tumbles down into a cavern, ripping a hole in the side. He tells the passenger that the contract is over, although he'll try to get her to safety, but can't guarantee the survival of her eggs, or reaching her husband. As he sleeps, she repairs Q9-0, the droid involved in breaking Qin from prison who betrayed the Mandalorian and tried to kill The Child, and uses it as a translator. She asks him if it is not the creed of the Mandalorians to keep their contracts, or is that just a story? So he takes the Child who is eyeing up her Eggs again outside and begins repairing the vessel, when the Child spots something, and they discover their passenger has left through the snow.
The Mandalorian tracks her to a hot spring where she is bathing and warming her eggs, and while he helps her put her eggs back into their container, the Child discovers some other eggs, opening one and finding a spider inside which he eats. As more of the eggs stir he returns to the Mandalorian in panic, and they see hordes of spiders emerging, including one larger than a man, and the three flee back to the Razor Quest.
They head inside, and the holed hull allows spiders to pour inside, and they retreat to the cockpit, but some spiders get inside before the Mandalorian can seal it, and threaten the Child, who is defended by their passenger wielding a blaster pistol. He hopes that his repairs will hold, and the Razor Crest lifts off, but a massive spider drops onto the hull, and it's razor sharp legs pierce the cockpit, and cause the ship to crash back down to the surface. As they fight for their lives, they hear other blaster fire, and the Mandalorian makes his way outside, only to discover the two X-Wings have landed and their pilots are using blaster rifles to clear the spiders away.
Once the spiders have been dealt with, the pilots identify the Razor Crest as having helped with the rescue of Qin, but tell the Mandalorian that the security logs show he captured the other criminals, and tried to save Davan, the crew member aboard the prison ship.
The Mandalorian asks if he can trade the bounty on the criminals he captured for repairs to his ship, but the two tell him to get a Transponder installed, and then leave in their X-Wings.
The Mandalorian patches up the cockpit, and then pilots the heavily damaged and sparking Razor Crest to their destination, the Child eyes up the container of eggs, and their passenger spots this, closing her arms more protectively over it, only for the Child to bring an egg from his clothing and swallow it whole. . .

High Points : Yet another absolutely fantastic episode.
And one which will do doubt fill a few peoples nightmares with the albino snow spiders scampering everywhere.
A slightly shorter episode this week, and those few minutes we've lost makes the episode a lot tighter than last weeks.

Low Points : While I enjoy the humour of the series, it did seem to take it a little far this week, with the Child eating the eggs of a sentient species repeatedly, which is done for laughs. Oh that little scamp, eating people again!

The crazy random happenstance that the Mandalorian just happens to be intercepted by Trapper Wolf, the same Republic Pilot that dealt with the escape of Qin back in the first season just seems too much for me.

Finally, the fact that Q9-0 is used by the passenger, in the same episode where the escape of Qin is a major plot point, the episode in which Q9-0 appeared, makes the universe once again just seem a little smaller, as everything referenced last season all just happens to be from one episode.

So what do you really think ? : I enjoyed it a lot, although perhaps not as much as last weeks, but there's not a lot in it, as it remains outstandingly good.

Final Words : So, we've not had any sign of Moff Gideon and his Darksaber, who seemed like he might be a major element this season, and while we got heavily reminded of the gang who helped the Mandalorian in the jailbreak of Qin, and then turned on him, we've not heard of them either. And I kind of thought that they would be recurring enemies, as I really liked Clancy Brown's appearance as a massive menacing Devaronian.
In fact, the Jango Fett clone we saw at the end of last weeks episode wasn't mentioned this week at all. (Until he's named, I think I'm on safe ground calling him a Jango Fett clone, as even if it is Boba as has been rumoured, then he still matches that description).
These seasons are only 8 episodes long, and if they keep leaving reappearances until the final few episodes, then they're going to be kind of packed (with Cara Dune and Greef Karga to make appearances as well at some point and the rumoured appearance of Ahsoka Tano).