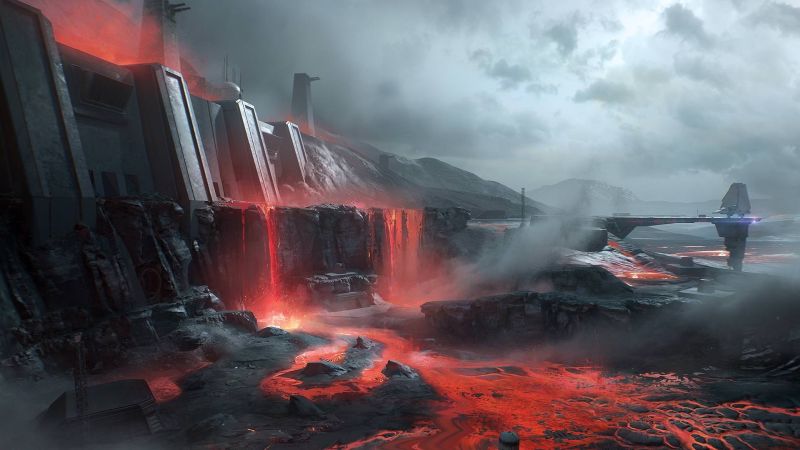 What is it ? : Taking control of Lando Calrissian you accompany Shriv Suurgav as you investigate an abandoned Imperial weapons depot on Sullust. They discover that it is once again in operation and they attempt to sneak into it, however are soon discovered and fight their way through the depot, which is manufacturing AT-AT and AT-ST walkers.
They decide that although Sullust has been liberated, the depot should be destroyed, and they cause the lava levels to rise swallowing the plant and destroying everything inside.
The pair race through the depot as the lava rises, escaping outside and taking a AT-ST to leave in., and they battle their way through the panicking Imperial force and try to reach an Imperial Transport ship, but it leaves, leaving them stranded as the lava rises around them.
However Iden Versio arrives with the Corvus and saves them just in the nick of time.

High Points : The game introduces a couple of gameplay elements in this level, including the rising Lava level, and steam which obscures targets. So we've got a couple of new elements to keep things fresh, but what makes this level really stand out is the banter between Lando and Shriv, which contributes to Shriv being my favourite character in the game.
As Shriv makes accusations at Lando, and Lando deflects defensively, their dialogue is funny and builds a wonderful history between the two characters.

Low Points : There's a couple of sections of the game where you need to activate switches, and the gameplay doesn't actually make it obvious where the switches are. So during play, I actually had to pause and switch to an online Walkthrough to help me through the level.
It's only a small problem, and perhaps I just missed the hints, but it was annoying and something I never noticed anywhere else in the game.

So what do you really think ? : The dialogue really boosted this level up, and taking control of Lando was interesting. The level itself is well designed, and the rising lava creates an interesting hazard and time limit as you move through the level.

Final Words : An interesting level, and one that helps keep the game fresh, after a couple which seemed to be getting a little samey, and it's always great to hear Billy Dee Williams back as Lando.