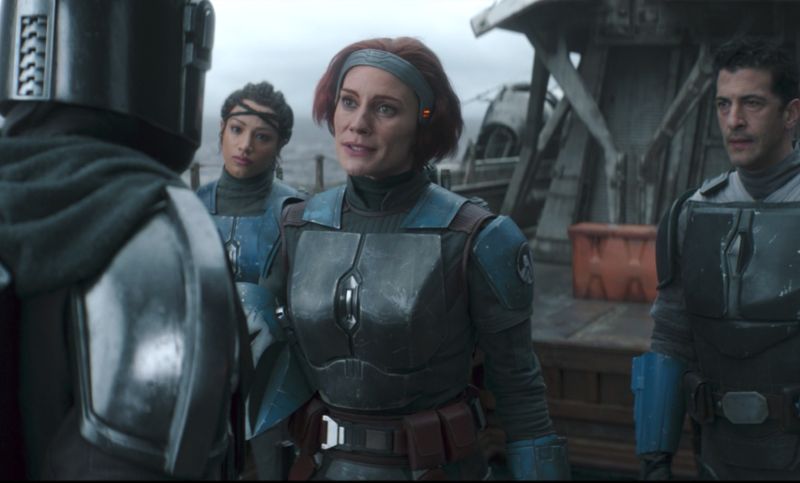 The Mandalorian: Chapter 11: The Heiress

What is it ? : The Mandalorian, The Child and their passenger arrive in a badly damaged Razor Crest at the moon Trask, crashing towards the planet and firing their landing jets at only the last second. However a malfunction causes the ship to tumble off the landing pad into the sea.
After it is retrieved, the Mandalorian contracts a Mon Calamari to repair the ship, and watches as their passenger is reunited with her husband, who pays the Mandalorian with information on where he can find others of his own kind.
This leads to him hiring some Quarren to take him on their boat to where they tell him Mandalorians are, but they actually plan to rob him of his armour. The Child is knocked into a pool with a large dangerous sea creature, with the Mandalorian diving in after to save him and becoming locked in with the creature.
However 3 other Mandalorians arrive via jetpack and rescue him, taking out all of the Quarren and saving the Child. The Mandalorian is glad to see others of his creed, but is surprised when they remove their helmets, and accuses them of not being Mandalorians, but when they tell him they're just not of his particular tribe (the Watch), he tells them there is only one way and leaves. They leave shortly afterwards detonating the boat behind them.
As he returns to the Razor Crest he is ambushed by family members of the Quarren, who intend to kill him for the deaths of their family, but once again he is rescued by the three Mandalorians, and they head to a bar to discuss matters. He tells them of his quest to return the Child to the Jedi, and their leader introduces herself as Bo-Katan and tells him of theirs, to liberate weapons so they can reclaim Mandalore itself, telling him that the Empire forced them apart as they are stronger together.
Bo-Katan offers him information to the location of the Jedi, in exchange for his help liberating an Imperial transport laden with weapons, agreeing, he leaves the Child with their former passenger and her husband, where he joins them in watching their eggs hatch.
The Mandalorian, Bo-Katan and the other Mandalorians use their jetpacks to board an Imperial Gozanti-class cruiser, battling Stormtroopers, and seizing control of the ship just as the captain attempts to crash it on the orders of Moff Gideon. Bo-Katan questions the captain, asking him whether "he" has "it", mentioning it was something that was taken from her, but he commits suicide rather than answer.
As the Mandalorians prepare to leave the planet in their stolen ship, Bo-Katan fulfils her deal to the Mandalorian by telling him that she knows of a Jedi, Ahsoka Tano in the city of Calodan on the world of Corvus.
He jetpacks back to the city and retrieves the Child, returning to the very patched up Razor Crest, and launches to head to Corvus.

High Points : Well it's great to see Bo-Katan once again, especially as she's portrayed by Katee Sackhoff who voiced the character in the Clone Wars and Rebels animated series. Although it now seems really odd that Ashley Eckstein won't be appearing as Ahsoka Tano (not that I have any problem with who they've reportedly chosen to play her).
Apart from that, it's a good action packed episode, with some amusing jokes in it here and there, and the Gozanti Class has never looked so darn good.

I found the revelation that the tribe that raised the Mandalorian, and his creed are those of the Death Watch to be fascinating. He's essentially been raised by the bad guys, those that helped Darth Maul seize control of their own planet. It's kind of like finding out he's been raised by religious fundamentalist terrorists.
While they may have reformed their ways during the reign of the Empire, but everything else we know about them is that they're pretty much bad guys.
It'll be interesting to see whether they go anywhere with that idea.

Low Points : Well, on a personal level I was annoyed to see the Quarren portrayed as bad guys once again, as I really like the species, but their various appearances make it hard to.
And I'm a little concerned that the amount of continuity from other series will make this episode a bit hard to get into, as the history of Bo-Katan, her former ownership of the Dark Saber, alluded to in her conversation with the Gozanti captain, and the Mandalorian having been raised by the Death Watch, may not be apparent to someone who hasn't seen every episode of Clone Wars. On this matter, I've got a friend who is watching and enjoying the Mandalorian, but hasn't seen much of Clone Wars who is going to let me know what he makes of it, so I may report back in future reviews whether my concerns were valid.

So what do you really think ? : Another really solid episode, this time only 33 minutes, but filled with action, great special effects and what felt like real movement forwards with the main plot.

Final Words : With the main plot moving on so quickly, rather than making us wait for another season finale before giving us the next step, it makes me concerned that the Mandalorians quest is just going to end quickly. With him being pointed towards Ahsoka, it makes me think that there is no great ending to handing the Child over to the Jedi.
But instead, he'll be left raising the Child forever (potentially the rest of his life, given that the Child is already apparently 50, so probably older than the Mandalorian himself).
The glimpse of the longer plot I think was revealed here, with the Mandalorian meeting Bo-Katan, and her connection to Gideon and the Dark Saber, that perhaps the series will be about the liberation of Mandalore itself.