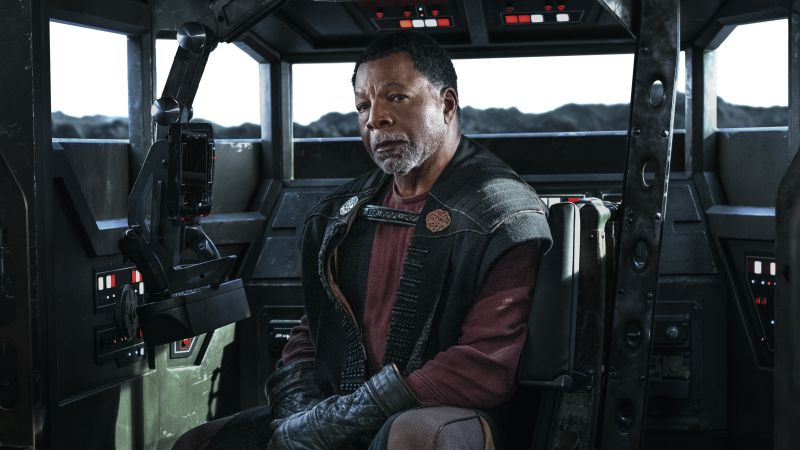 The Mandalorian: Chapter 12: The Siege

What is it ? : The Mandalorian and The Child are heading for Corvus aboard the Razor Crest which remains roped together by the Mon Calamari engineers on Trask and the Mandalorian realises that the ship is in no state to reach their destination. So after trying to get the Child to help with repairs he decides to go to Navarro to ask friends for help with the repairs.
Meanwhile in the Mandalorian Armourers workshop on Nevarro some Aqualish thieves are splitting up their loot and cooking over the furnace, when the Marshall bursts in and guns them down, revealing the Marshall of Nevarro is Cara Dune.
The Mandalorian lands the Razor Crest at the outskirts of the city where he is met by Greef Karga, now Magistrate of Nevarro and Cara Dune. Greef dotes on The Child, asking it if the Mandalorian is treating him well, while they move through the bustling city, explaining that under their protection the settlement and planet is going from success to success.
Greef orders repairs to be made to the Razor Crest, and one of the engineers watches the Mandalorian and the Child, and offers these repairs in exchange for help from the Mandalorian in dealing with the last Imperial Refuge on Nevarro.
Leaving the Child with other children at a school, where it uses the force to steal another childs snacks, they depart for the Imperial base, accompanied by the Mythrol who The Mandalorian captured at the beginning of the first episode who is working off his crime for Greef.
Taking a speeder to the base, Greef, Cara and the Mythrol slice the door locks to gain entry, while the Mandalorian uses his jet pack to enter from above. They discover the base is still heavily manned, and that there is Speeder Bikes, Imperial Troop Transports and Outland Tie Fighters stored here as well as many Stormtroopers.
They breach the control centre and shut down monitoring systems, before heading to a reactor powered from a lava seam below, and sabotage it to destroy the base. As they retreat through the base they discover a laboratory containing a number of clones, and access a record from Pershing the scientist who was experimenting on The Child to Moff Gideon, explaining how he had only managed to retrieve a small amount of material from the Childs Blood and that one of the experiments had promising results with it's "M-Count" before it rejected the blood.
The Mandalorian departs using his jet pack to return to the Child, and Cara, Greef and the Mythrol fight their way out of the base, stealing a Imperial Troop Transport and leaping it from the top of the base crushing their landspeeder beneath it.
Speeder Bikes depart and chase them down, and with Cara piloting and Greef manning the turret they manage to dispatch the Troopers pursuing them. Four Outland Tie Fighters take off and pursue them, just before the reactor detonates destroying the base. And they race back to the city under heavy fire until a freshly repaired Razor Crest joins the battle and takes out the Tie Fighters, wishing them well and heading off to Corvus.
Meanwhile aboard an Arquitens Cruiser in deep space, an Imperial officer receives a communication from the same engineer who had been watching the Mandalorian and Child, and she reports to Moff Gideon that a tracking device has been successfully planted aboard the Razor Crest. While around him technicians work on dark skinned combat droids.

High Points : Well, wow, once again The Mandalorian knocks it out of the park with a fantastic episode, for me while the entire chase sequence was pretty amazing, the beginning with the Speeder Bikes was the highlight.
The familiar and fantastic sound of Speeder Bikes racing past is awesome, they've always sounded great but this is the best use ever of Speeder bikes, as they howl after the heroes aboard their stolen Imperial Troop Transport.
And as always it's great to see an ITT, as I've always loved these vehicles since I first saw them back in the 70's as a Kenner (Palitoy in the UK) vehicle for their collection of Star Wars figures.

Low Points : While an excellent episode, it did feel a little continuity heavy, with not only Greef and Cara returning, but also the Mandalorian Armorers base, the Mythrol from the first episode, and potentially references to Dark Troopers (the droids in the final scene), Snoke (the Midichlorian clone experiments in the base) and so much more.
It bogged down the episode for me with so much to remember and put together.

I would also mention the appearance of Jean Guy but to tell the truth I never noticed him (apparently a member of the crew wearing jeans and a t-shirt can be seen as the heroes infiltrate the Imperial base).

So what do you really think ? : Wow this was really good, we've not had a proper chase scene in the series, and this absolutely excelled at what it did, exciting from start to finish and very satisfying.


Final Words : This episode as well as being exciting has probably set up the series for the rest of the season, with the Mandalorian now being tracked by Gideon, the heroes now aware of the reason for Gideon wanting the Child, and new powerful opponents being put into place with Gideon preparing Dark Troopers, and experiments potentially creating Snoke.
And because of IT related problems, I've seen this episode 6 days late, so only have 24 hours to wait for the next episode "The Jedi".