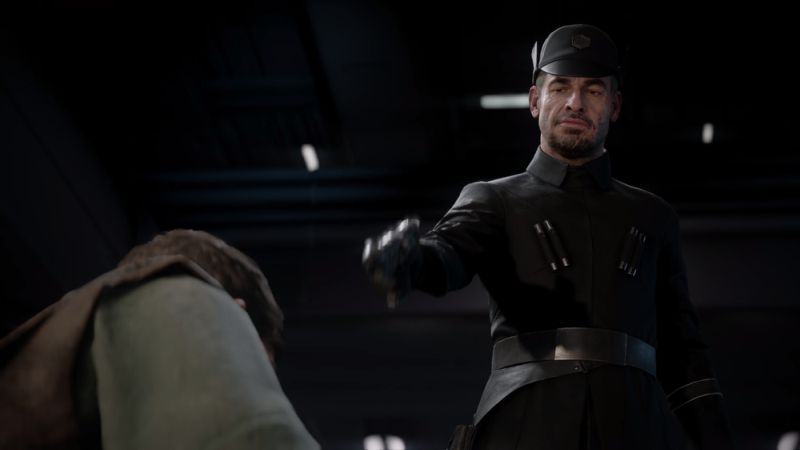 What is it ? : It's 30 years later and Kylo Ren arrives at Pillio and meets with Protectorate Gleb and members of Pinata Security. They hand over their prisoner Del Meeko who has been using the Corvus as a freighter, and you control Kylo as he pursues Del through his memories attempting to locate the location of the map to Luke Skywalker.
Battling your way through Del's time as a Shoretrooper on Scarif, you soon reach his time as a member of Inferno Squad and reach Endor, Pillio and Vardos, until you catch Del and he cracks and tells you what he knows.
With the knowledge that San Tekka took it to Bayora, Kylo releases Del and hands him over to Gideon Hask, now wearing the Uniform of a First Order officer. Del pleads with Hask not to go after Iden, but Hask mocks him for trading in his duties to haul cargo on the Corvus before repeatedly shooting him.
Outside he orders Gleb to bury the bodies but leave the Corvus untouched, Gleb warns this will allow Iden to track them to Vardos, and Hask replies that he is counting on it.

High Points : The power of Kylo Ren allows him to carve his way through the opponents on this level meaning that there's no real challenge and it isn't much more than a glorified cut scene.
But in this function is serves its purpose well, setting up the events of the Resurrection DLC extremely well. Although I have to question its placement, as when I played it I moved straight onto the DLC, but would it have made as much sense when the game originally came out and the DLC wasn't yet available.

Low Points : With little challenge and a repeated use of locations we've already visited throughout the game, there's not a lot to keep you interested here, which doesn't really come into effect as the level is incredibly short as well, which is a problem in itself.


So what do you really think ? : While it serves it's purpose well in introducing Hask as the villain of the DLC, there's not too much interesting here, especially considering the revelation that Del and Iden have been married for 30 years, and that it kills Del off.


Final Words : I think the game thinks that the main selling point of this level was getting to play as Kylo Ren, unstoppable killing machine hunting for Del Meeko through his own memories. But that's more than a little dull, we've already had fun as a powerful Jedi back on Pillio as Luke.
Where I think this could have been a far more interesting level, ramping up the difficulty and challenge would be by you playing as Del Meeko, retreating through your memories while being hunted by the unstoppable killing machine Kylo Ren. The concept that your character knew he was outmatched, but would summon up the challenges from the game, the Scout Walker on Endor, the blockades on Vardos, etc to block Kylo Ren, only to have him effortlessly cut his way through before catching you and ripping the information from your mind seems more interesting to me, and something which would set the game up to be more of a challenge in the DLC.