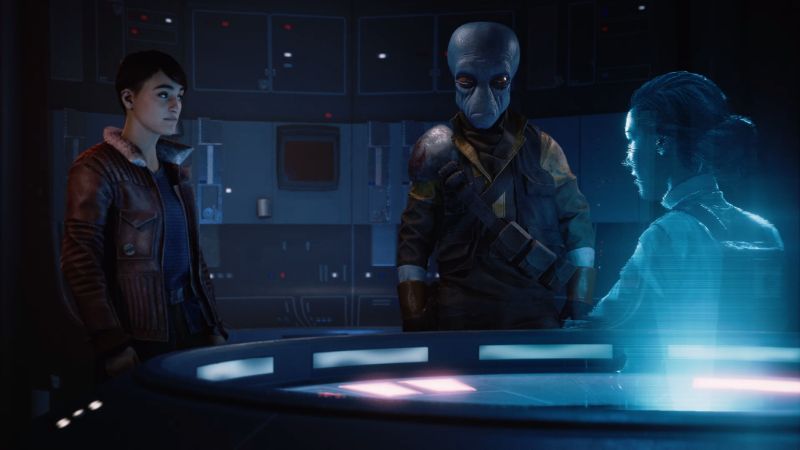 What is it ? : Iden Versio (now Iden Meeko) is training her daughter, Zay, in piloting an X-Wing, with the two of them in Kiara's Comet Cluster in the Hartaga system. They receive a communication from the Corvus, which Iden assumes is from her husband Del Meeko, but turns out to be Shriv Suurgav who tells them they need to meet at Pillio.
The two head to the rendezvous, and aboard the Corvus, Shriv tells them that Del was investigation a First Order Project called Resurrrection and that Shriv found the Corvus on Pillio but there was no sign of Del.
The ships logs tell them that Del visited Athulla, a planet on the edge of the Jinata system, and they head there arriving in the asteroid field surrounding the world. Where they are contacted by an Athuallan expecting Del who had been investigation Jinata Security who have been kidnapping families from their planet.
Suddenly the signal is jammed by the Nebulon-B Frigate Opportunity, captained by Leema Kai, who orders the Corvus to surrender. Scrambling their fighters, Iden and Zay battle the escort of the Opportunity, destroying it's fighters and transports, before disabling the Frigate itself. Leema Kai scrambles his personal modified N-1 Starfighter, but Iden defeats him, and the Corvus threatens the Opportunity, which tells them that Project Resurrection is run by Protectorate Gleb from Jinata Security headquarters on Vardos. . . .

High Points : A fairly straightforward level, with a fight in an asteroid field, it nonetheless is a fun enough level, and it's a joy to see a N-1 Starfighter used as the pimped up custom ride of a villain. I don't know anything about Leema Kai really, except he's got excellent taste in Starfighters.

Low Points : The DLC launches with a level which doesn't contain anything new, but is well done. Which is kind of everything about this DLC really, there's no new gameplay elements introduced, but it uses everything from the main game really competently and if you enjoyed the main game, then this is just more of the same.

So what do you really think ? : For it being very reminiscent of what's gone before, I really enjoyed this level and found it one of the more memorable experiences in the game, a desperate battle in an asteroid field, against a custom N-1 Starfighter and a Nebulon-B, it's really quite fun.

Final Words : The team that made the game certainly know what works by this point, and are skilled in making that content, so while there's nothing new here, it does present the same gameplay in a perhaps better light than it was originally used, as they've really learned what people enjoy about their game by this point.