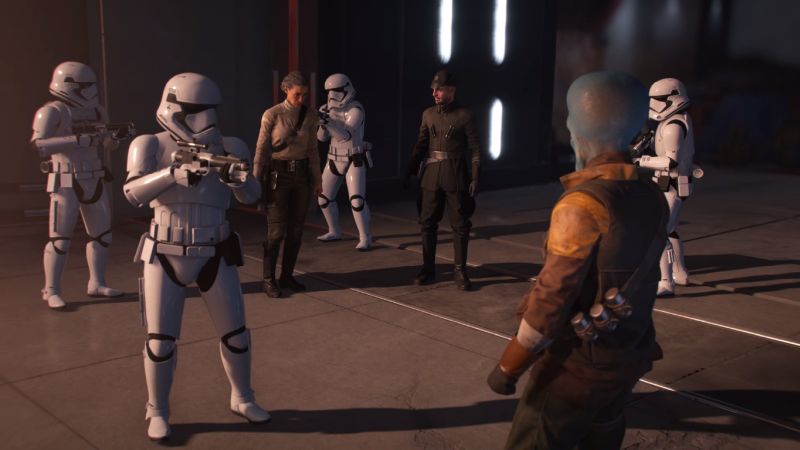 Ashes of the Empire

What is it ? : The Corvus arrives at Vardos, a world still devastated by Operation Cinder, and Shriv and Iden head the familiar route to the Archive building to confront Gleb, leaving Zay aboard the ship.
As they head through the streets they spot red lights in the sky, as Starkiller Base destroys the Hosnian system as the events of The Force Awakens occurs. They enter the building and discover the body of Gleb laying dead on the floor, and Gideon Hask emerges, and Iden accuses him of kidnapping children.
Hask responds that he is rescuing them and giving them a family, just as Iden, Meeko and Hask used to be a family, telling her that it's only right that in this place that she broke up their family that his revenge should occur., since he has already killed Del, and will now kill their daughter Zay, and he orders a Star Destroyer to fire on the Corvus, destroying it.
The Stormtroopers surrounding them begin to escort Shriv and Iden off to be interrogated, but Gleb's Jinate Security forces attack for revenge for the death of their leader, causing a distraction and allowing the pair to escape. They escape through the streets, and detect signals from escape pods from the Corvus, and begin searching their locations to find Zay.
Eventually they locate her and team up, deciding to go after Hask's Star Destroyer to kill him, and Shriv welcomes Iden to The Resistance. . . .

High Points : It's fairly interesting to return to Vardos and witness the repercussions of the events that you played through some decades earlier, although I kind of expected it to be a little more Fallout that it is, as it looks as if the devastation happened just days before not many years.
Also I was a little critical of the DLC for not adding anything to the game, but this level does actually introduce small ridable walkers that you can pilot for a short time until they become too damaged to use. From my experience of the earlier Battlefront Games, this was a feature often used in levels, so I guess it remains in the multiplayer game, however we've not seen it used in the Single player campaign, so it was a new and welcome addition.

Low Points : While doing everything that Battlefront does, but with some experience on how to do it under their belt, this level is just more of the same. And it really gets a little grindy, as we move from area to area, fighting lots of Stormtroopers in a slightly different location each time.
It even manages to feel more repetitive, as you're forced to turn around and fight your way back through your route at a point, meaning that you're just returning to areas you've already seen.

So what do you really think ? : We see something new here, but by this point Battlefront 2 is getting overly familiar and its getting a little dull to just fight our way through waves of Stormtroopers.

Final Words : So, only one level to go as the Resurrection DLC has only 3 levels. So we'll soon be finished with Battlefront 2.
And while this is a well done level of the game, it's starting to feel overly familiar by this point, and it's beginning to feel a little like a marathon, where we're only keeping going because the finishing line is so tantalisingly close.