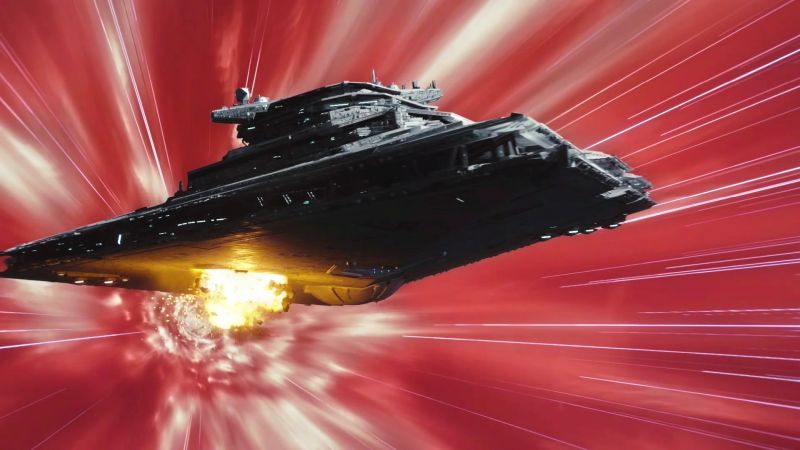 What is it ? : In stolen Tie Fighters, Iden, Shriv and Zay approach the Retribution, a Resurgent-class Star Destroyer, and attempt to appear as a normal flight of Tie Fighters, as they scan the Star Destroyer for weaknesses.
The Star Destroyer challenges them as the stolen fighters were supposed to remain on the surface, and a skirmish begins, until the locate a weakness at the rear of the Star Destroyer, blowing their way through it's hull into the inner workings of the ship. However as they fly through the inside of the vessel, it jumps to Hyperspace and they crash inside it and are forced to make their way further on foot.
Locating a computer terminal, they discover the plans to Project: Retribution, involving thousands of abducted children who are being trained as Stormtroopers. They also download the plans to a First Order Dreadnaught. Needing to get the ship out of Hyperspace before they can escape, Iden plans to sabotage the vessel with explosives and she and Zay steal some and head for the Hyperdrive.
Equipped with a Minigun, Iden holds back First Order forces as Zay works planting the explosives in various places around the Destroyers Hyperdrive. Just as they finish, Hask arrives and holds Zay at gunpoint, demanding that Iden decide between her daughter and completing the mission. He throws Zay from the platform, but Iden catches her, only for Zay to pass her Hasks pistol she took, and Iden shoots Hask and he falls from the platform into the reactor core below.
Zay detontates the explosives causing the massive vessel to be ripped out of Hyperspace, only to notice that Iden has been wounded, and her mother tells her that it's too late, but if she's going to die at least it's for a reason.
Looking into Space, Zay sees the explosion of Starkiller base creating a new star, and she Dio and Shriv take a Special Forces Tie Fighter to the Resistance base at D'Qar where they pass on the Dreadnaught plans so the forces there can locate a weakness in the vessel. Leia assigns them a task to go to the outer rim and seek help and reinforcements, a mission that they accept, making the jump to hyperspace . . .

High Points : I do honestly like the way that it ties into The Last Jedi, with Zay and Shriv delivering the Dreadnaught plans to the Resistance, so that Poe Dameron can take advantage of the vessels weaknesses at the beginning of that movie. It's not a massive thing, and they don't make a huge point of it, but it really makes you feel as if Iden's death helps out in a little way.
Otherwise the level's fairly straightforward, with nothing much new, but everything done well, mainly consisting of an extended escort mission, but not one as offensive as most.


Low Points : There's really nothing much new here, and while it's done well, I'd really hoped for something exciting for the game to go out on, but sadly it manages to just come to an end with an average mission.

So what do you really think ? : It's a fun enough mission, and quite a long one at that, so it does provide quite a lot of play, but we've seen it all before, and just making it the First Order instead of the Empire, doesn't instantly make it more fun.

Final Words : And that's the story of Iden Versio (Meeko) completed, Battlefront 2 is a decent game, and one that provides an entertaining and involving storyline, while pulling some interesting tricks off for a first person shooter.
Out of the Star Wars games I've played recently (Battlefront 2, Fallen Order & Squadrons) it's actually the one I liked the plot of most, and found the most variety in play, and therefore probably enjoyed the most.
I also pay credit for it being the complete package, and not really leaving any doors open for a sequel, with Iden Versio's story being complete within the game, we get a story with a beginning, middle and end, without leaving threads hanging in the hope we can spin off another game.